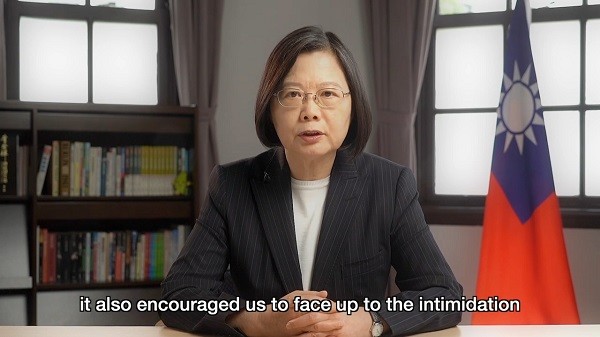 TAIPEI (Taiwan News) — During a speech delivered on Monday (Oct. 12), President Tsai Ing-wen (蔡英文) said that given the shared values of Taiwan and the Czech Republic, relations between the two countries will "only grow stronger."

In a pre-recorded video broadcasted during the 24th Forum 2000 Conference on Monday, Tsai said that "Taiwan and the Czech Republic are partners with shared values. We believe in freedom, equality, transparency, human rights, and good governance." She then thanked Czech Senate President Milos Vystrcil for leading an 89-member delegation to Taiwan in August.

Tsai said that Vystrcil's declaration "I am Taiwanese" at the Legislative Yuan in Mandarin not only moved the Taiwanese people but "also encouraged us to face up to the intimidation and challenges from the Chinese Communist Party regime." She said that the Czech delegation's visit to Taiwan despite the Wuhan coronavirus (COVID-19) pandemic and pressure from China "showed us that Taiwan is never alone."

Tsai asserted that because of the shared values, the partnership between the two countries will "only grow stronger." She further stated that democracy and freedom will serve as "the basis for our economic prosperity."

The president pointed out that economic exchanges between the two nations have already exceeded two decades and that Taiwan is now "the fourth largest investor in the Czech Republic," surpassing China. She noted that major Taiwanese tech companies such as Foxconn, ASUS, and Acer all have factories in the Czech Republic.

She then pointed out that starting next year, Taiwan will offer 50 scholarships to Czech students to come to Taiwan through exchange programs. "I hope that through these educational exchanges, we can facilitate even more mutual understanding and create an even more cooperative future," said Tsai.