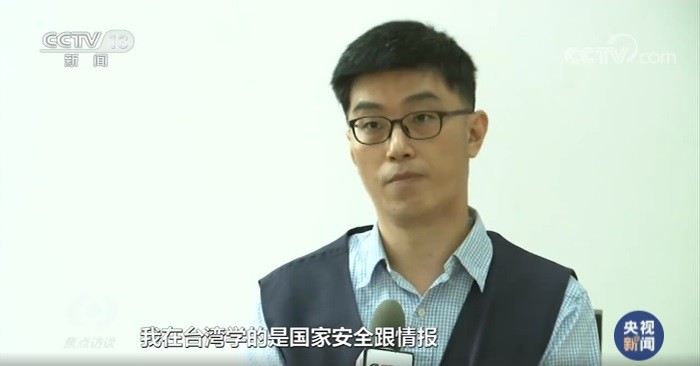 TAIPEI (Taiwan News) — Beijing’s state-run China Network Television (CCTV) ran a program Monday evening (Oct. 12) in which the authorities claimed to have detained a Taiwanese man who used his academic post in the Czech Republic to carry out espionage against China.

Cheng Yu-chin's (鄭宇欽) "confession" was aired on CCTV one day after Taiwanese local government advisor Lee Meng-chu (李孟居), in prison garb, admitted to endangering China's national security in the same program. The 43-year-old native of Kaohsiung apologized for "secessionist and separatist activities" and for having "caused harm to the Mainland."

According to CCTV and Chinese Communist Party mouthpiece the Global Times, Cheng, who had been based in Czechia for some time and later taught at Charles University in Prague, was recruited by a Taiwanese envoy to work for Taiwan's intelligence services in 2004. Since then, Cheng has allegedly attempted to buy off Chinese scholars and diplomats within China as well as in other countries, such as the Czech Republic.

In addition, Cheng supposedly doctored essays on China in order to spread the claim that Chinese nationals, including overseas Chinese in the Czech Republic, are spies, CCTV said. Chen was arrested when he visited China in April 2019, but the exact location of his apprehension has not been disclosed.

Johnson Chiang, a senior official from Taiwan’s Ministry of Foreign Affairs (MOFA), said during a press briefing on Tuesday (Oct. 13) that the Chinese media has made several false claims about Cheng’s case. There has never been a person named Lee Yun-peng (李雲鵬) working for the ministry, said Chiang, rejecting CCTV’s allegation that Lee, an envoy from the Taiwanese representative office in Prague, had recruited Cheng to work as a spy for Taiwan's intelligence services.

Cheng appears to have never been a faculty member at Charles University, Chiang said. While Cheng was living in the Czech Republic from 2005 to 2018, Cheng openly promoted Beijing’s One Belt, One Road Initiative and China’s relationship with the Czech Republic, added Chiang.

In the CCTV report, Cheng was described as being a "Taiwan spy" and "separatist" who had longed to work for the Taiwanese national security or intelligence agencies. According to the state media, Cheng had previously worked as an assistant for former Democratic Progressive Party (DPP) Chair Cho Jung-tai (卓榮泰), a claim later rejected by both Cho and the DPP.

Cho, who does not currently hold a senior position in the party, said via Facebook that he does not personally know Cheng and has therefore never hired him for any position. DDP Spokeswoman Yen Juo-fang (顏若芳) denounced the CCTV’s program as "unfathomable," "slanderous," and "malicious."

Yen added that in order not to further sabotage cross-strait relations, "we call on the Chinese authorities to stop political manipulation and propaganda operations."

With regard to Cheng’s detention by the Chinese government, the MAC said it will look into the case and offer necessary assistance to Cheng’s family. It said neither it nor the Strait Exchange Foundation, a quasi-governmental agency that offers services to the Taiwanese community in China, had received any request for help from Cheng's family.

The Global Times has recently been running a series of reports on "Taiwanese spies infiltrating China" as Taiwan celebrated its National Day last week. In the Cheng story, it claimed that two Taiwanese women named Lu Jia-jia and Vicky Tao have also been detained for liaising with Cheng in his espionage activities.