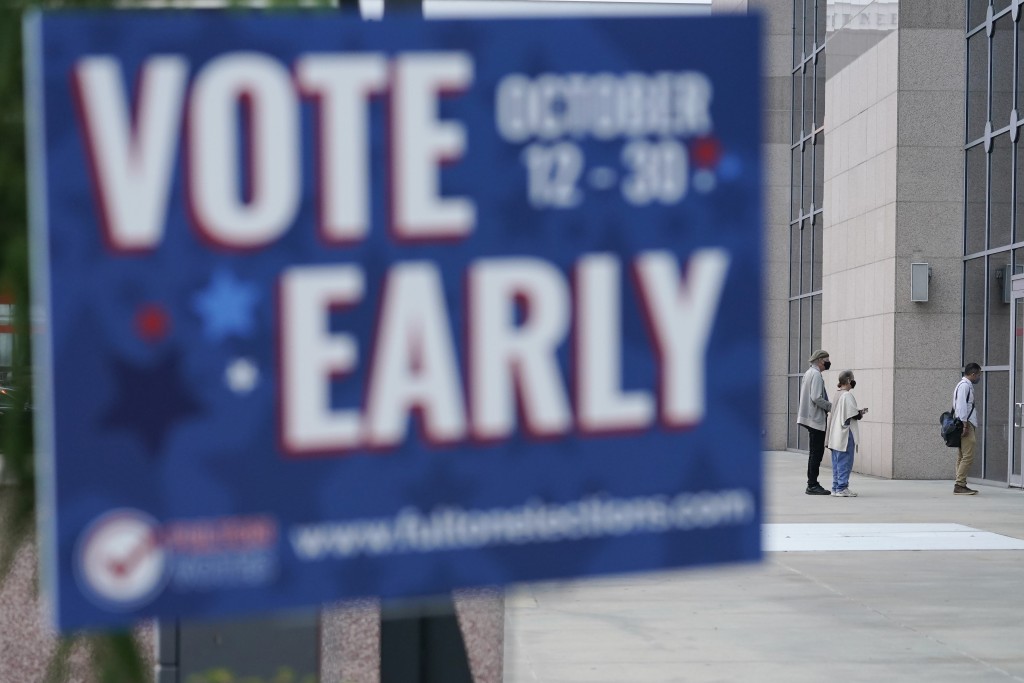 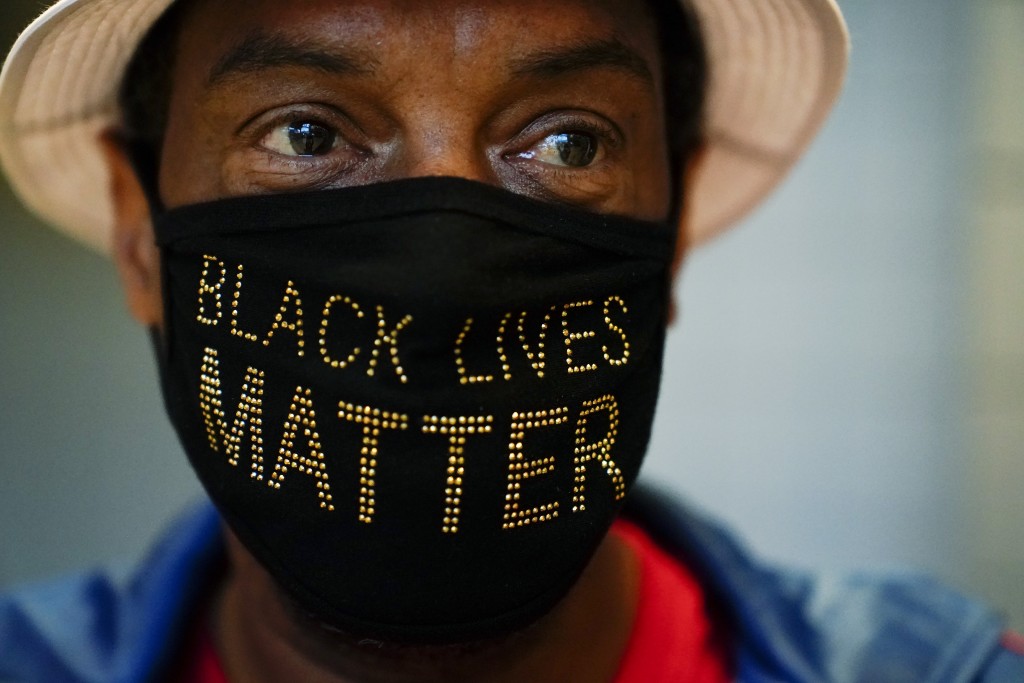 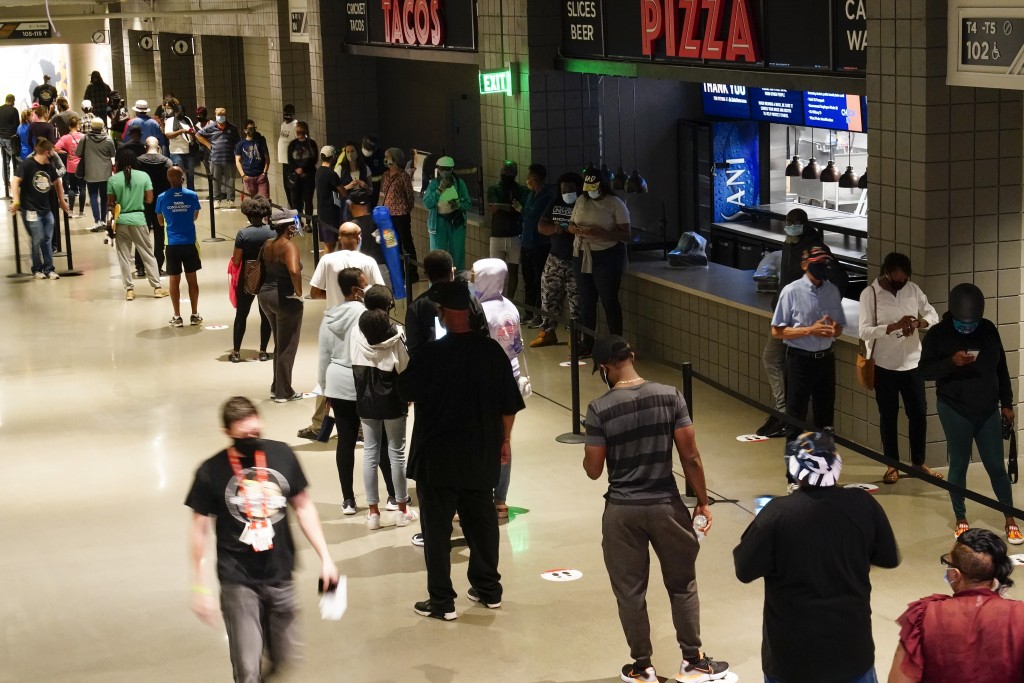 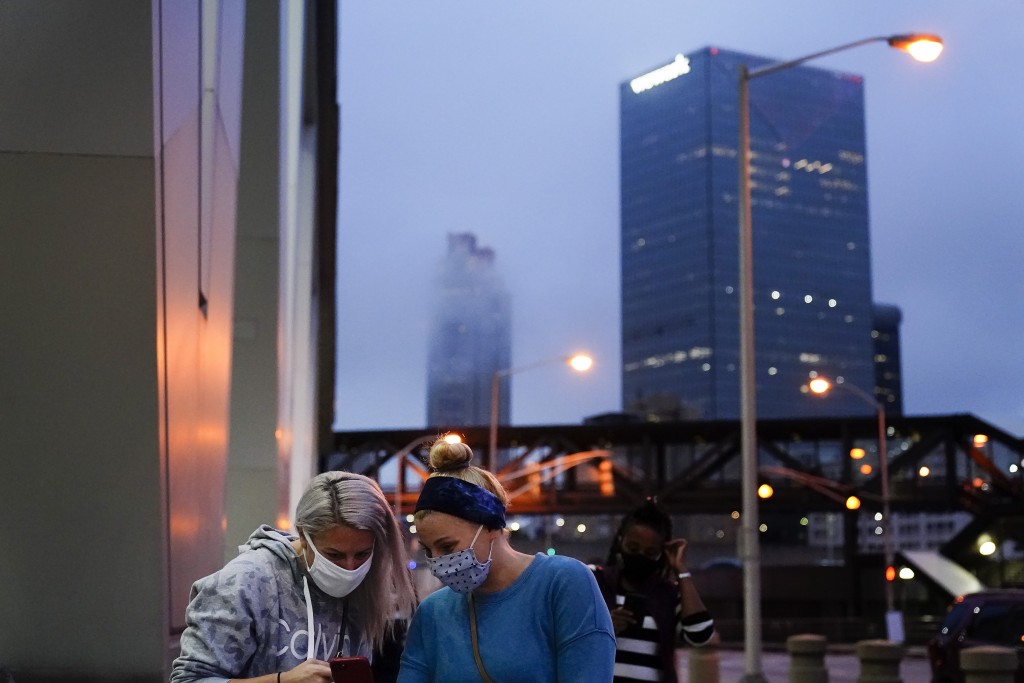 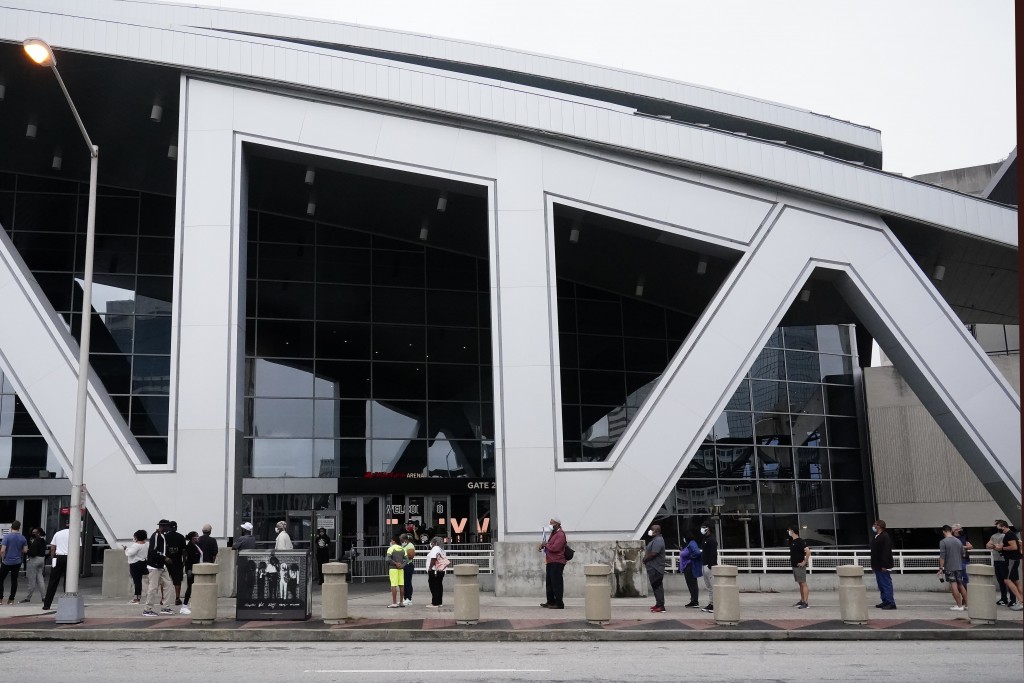 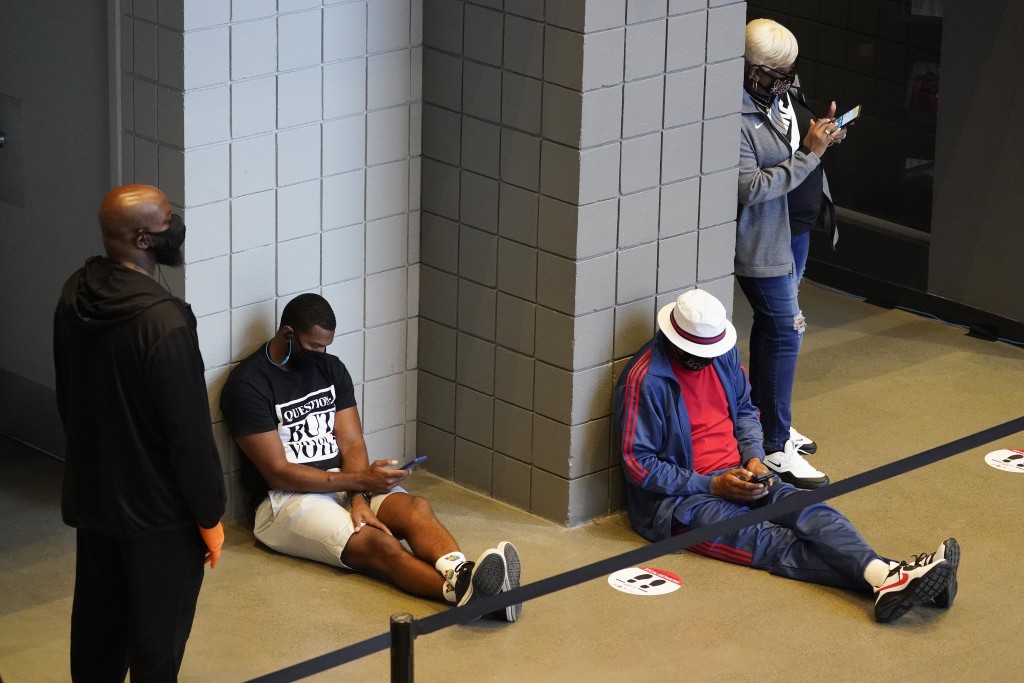 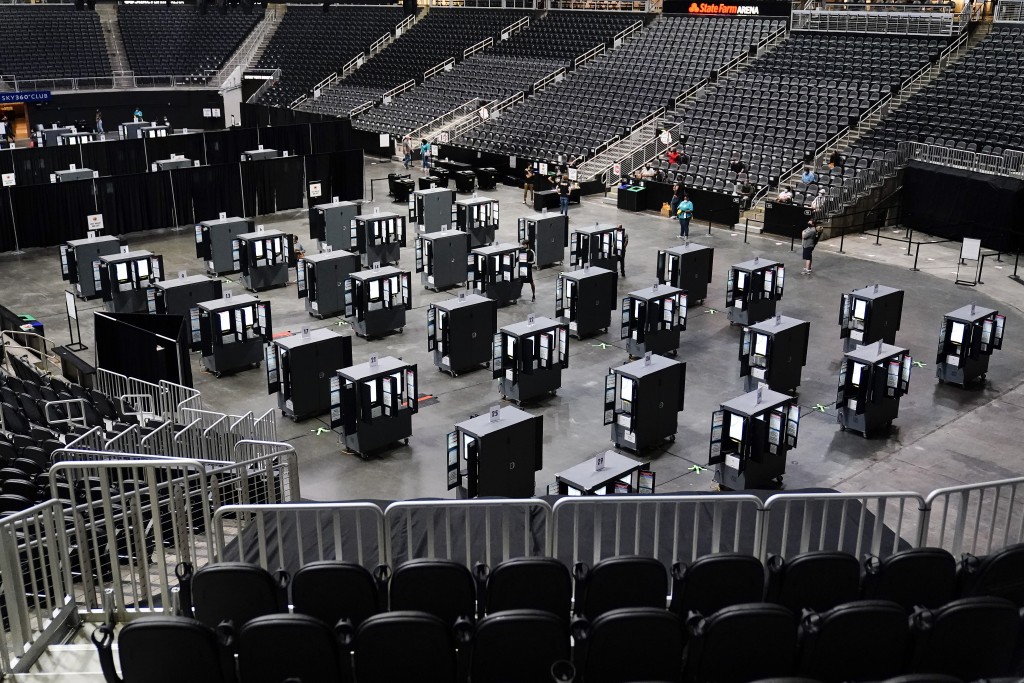 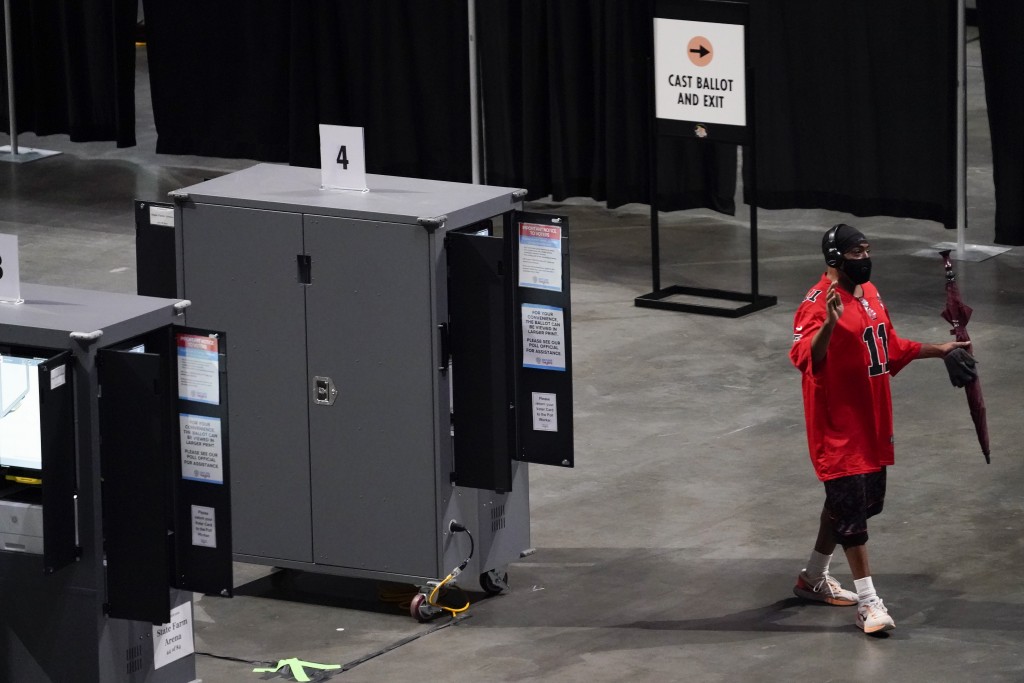 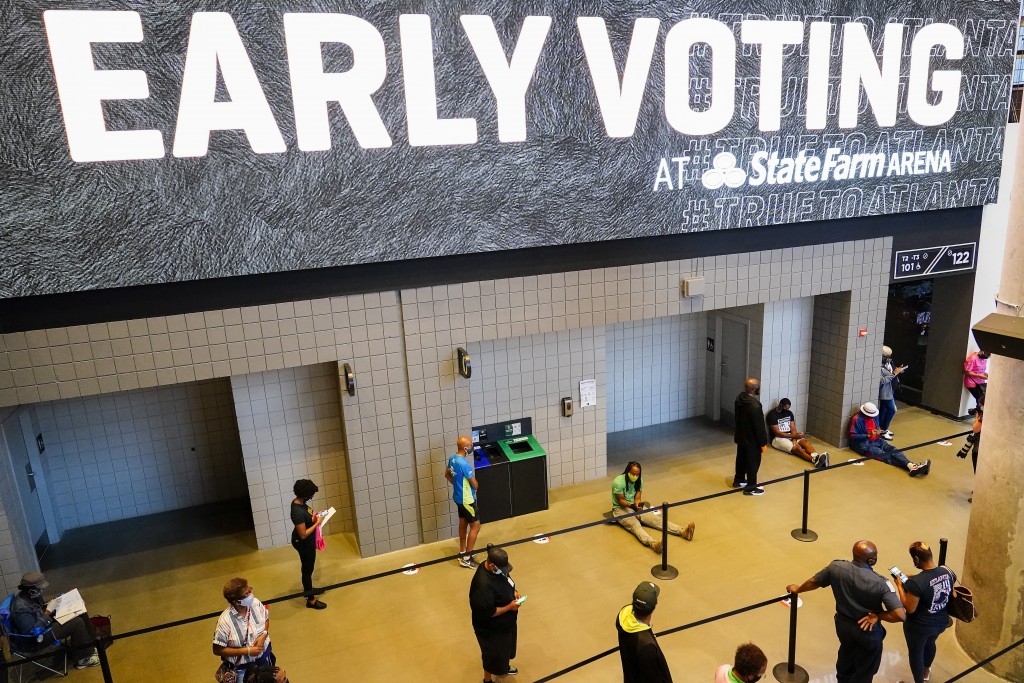 ATLANTA (AP) — The chance to cast ballots on Georgia's first day of in-person early voting Monday had thousands of people waiting for hours to make their voices heard.

Eager voters endured waits of six hours or more in Cobb County, which was once solidly Republican but has voted for Democrats in recent elections, and joined lines that wrapped around polling places in solidly Democratic DeKalb County. They also turned out in big numbers in north Georgia's Floyd County, where support for President Donald Trump is strong.

With record turnout expected for this year’s presidential election and fears about exposure to the coronavirus, election officials and advocacy groups have been encouraging people to vote early, either in person or by absentee ballot.

Many answered the call on Monday, showing up in numbers that overwhelmed some locations.

Kai Uchimura, 25, waited more than two hours to cast his ballot at a DeKalb County election site in metro Atlanta, but he said he was heartened by the turnout and didn’t mind the line.

“If it’s just volume, the amount of people voting, then I think that’s democracy working,” he said.

Cobb County Elections and Registration Director Janine Eveler said the county had prepared as much as much as it could, “but there’s only so much space in the rooms and parking in the parking lot.”

"We’re maxing out both of those,” she said. “People are double parking, we have gridlock pretty much in our parking lot,” she added.

Hundreds of people slowly moved along a line that snaked back and forth outside Cobb's main elections office in a suburban area northwest of Atlanta. Good moods seemed to prevail, even though some people said at 1 p.m. that they'd been waiting for six hours. A brief cheer went up when a pizza deliverer handed a pie to someone in line.

At least two counties briefly had problems with the electronic pollbooks used to check in voters. The issue ground voting to a halt for a while at State Farm Arena, where the Atlanta Hawks NBA team plays. On-site technicians resolved the problem and the lines soon cleared at the arena, which is Georgia's largest early voting site, with 300 voting machines.

“We're disappointed that it happened,” Hawks CEO Steve Koonin told reporters, but he noted that there are still plenty of days left. Early in-person voting runs through Oct. 30 in Georgia.

Problems with the electronic pollbooks — along with high turnout, the consolidation of polling places and shortages of poll workers — bedeviled Georgia’s primary in June. The dysfunction renewed questions about Georgia's ability to conduct fair elections, two years after the state drew heavy scrutiny during a closely watched gubernatorial election that also saw long waits and other problems.

While voters must vote at their assigned polling place on Election Day, they can vote at any voting site in their county during early voting. Some people lined up before dawn Monday to be among the first to vote. Turnout also may have also been boosted because Monday is a federal holiday, so more people are off work.

Natalie Rawlings, 49, had prepared to vote absentee but didn’t trust the postal service, so she turned in the blank absentee ballot to poll workers before voting in person Monday.

She went first to a library in Atlanta, but there was no parking and a long line, so she went to State Farm Arena, where the line didn't move for 45 minutes. A handful of people left after someone announced that there was a “known software issue” they were hoping to work through. But most stayed. In the end, it took her about an hour and a half to vote.

“I’m outside. It’s a nice day. They’re giving water away. There are worse things. And everybody is appropriately socially distanced,” Rawlings said.

Rawlings, a Democrat, said she was motivated by the “coarseness” of President Donald Trump's language and his seeming lack of respect for other branches of government and world leaders: “It’s gotta end.”

Election officials also reported long lines in Floyd County, which also had a problem with the electronic pollbooks. That slowed things initially at the county’s two open voting locations, but it was resolved within about an hour, said Robert Brady, the county’s chief election clerk.

“Typically in Floyd County, you have a line that lasts five minutes. Today it’s taking up to 30 minutes,” Brady said. “It’s because of the huge — and I’m talking about huge — turnout.”

In Macon, Seth Clark arrived to vote at the main election office at about 9:30 a.m. Monday and found a U-shaped line wrapping around the parking lot. It ended up taking him three hours to vote.

“I’ve never seen this many people on the first day of early voting,” said Clark, who won election over the summer to a nonpartisan seat on the Macon-Bibb County commission.

With Georgia emerging as a potential battleground, both the Republican and Democratic presidential campaigns sent surrogates to the state Monday.

Meanwhile, Donald Trump Jr. was set to rally Republican voters in Savannah near the coast and Kennesaw, just outside Atlanta.

Associated Press contributors include Brynn Anderson and Ben Nadler in Atlanta, Ron Harris in Marietta, and Russ Bynum in Savannah.