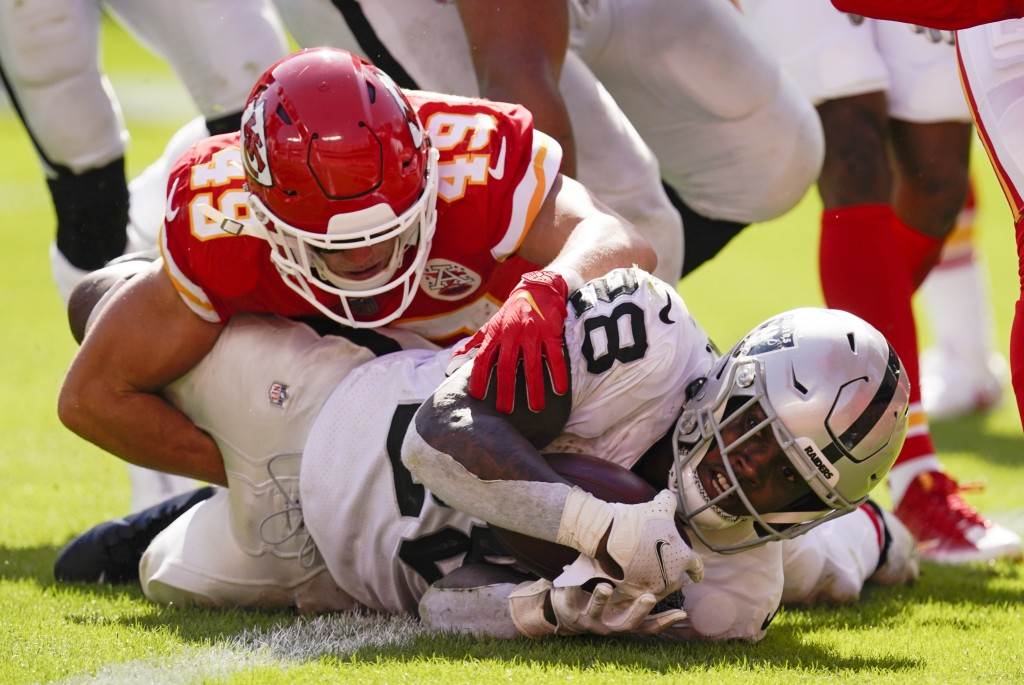 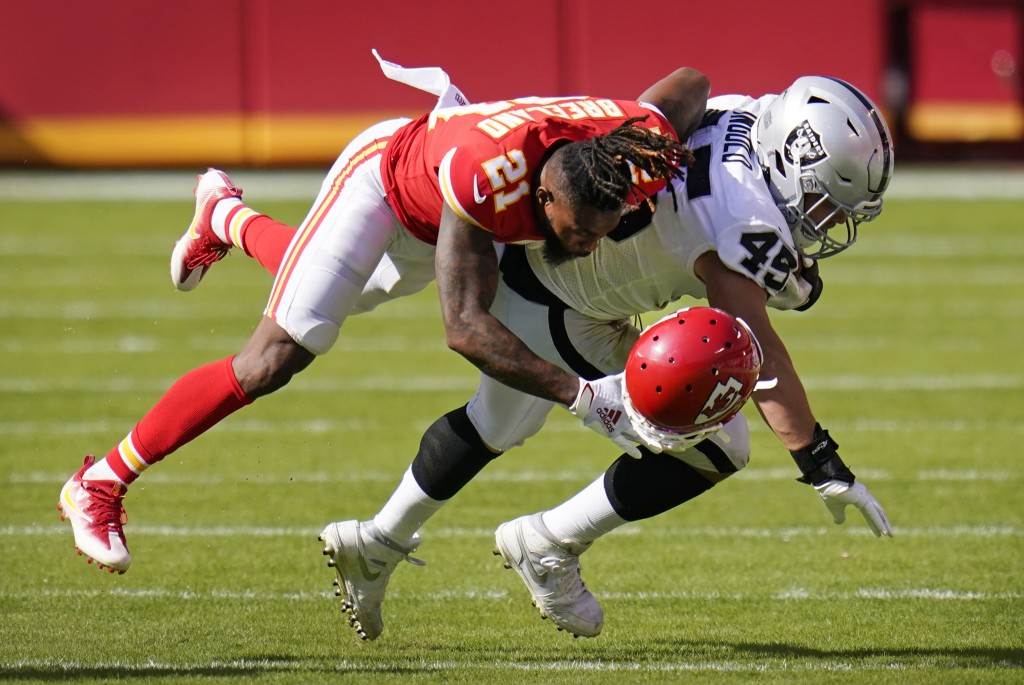 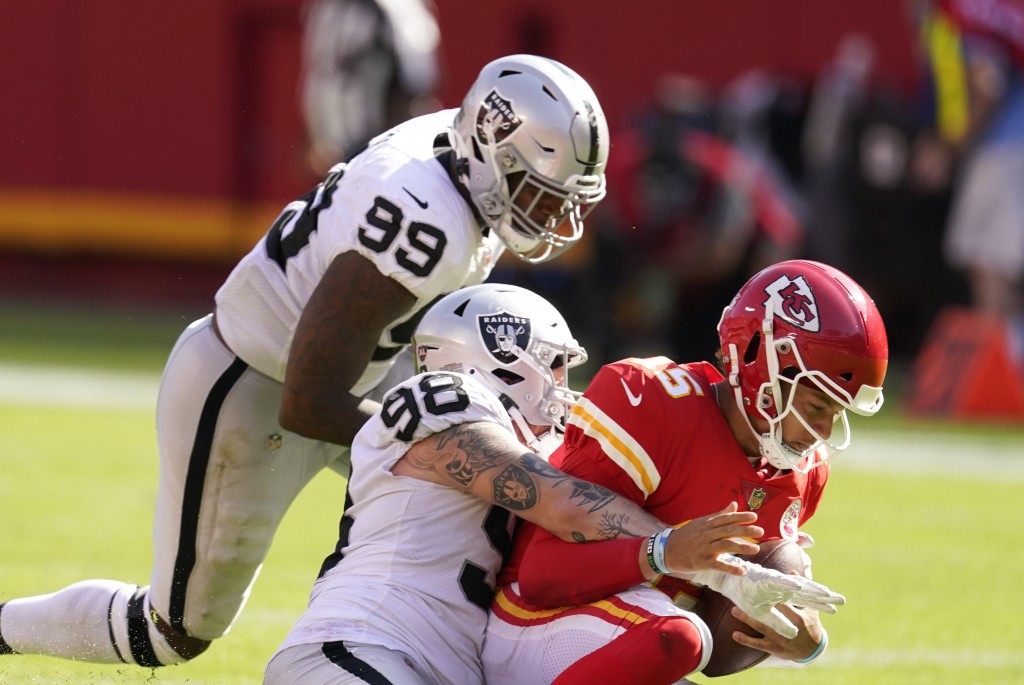 KANSAS CITY, Mo. (AP) — The Kansas City Chiefs should have felt good about the state of their defense heading into Sunday's game against the Las Vegas Raiders. They had held every opponent to 20 points or fewer and were getting back defensive tackle Chris Jones from an injury and cornerback Bashaud Breeland from a suspension.

They proceeded to give up 490 yards of total offense, allowed Derek Carr to throw three touchdowns passes — including a 72-yarder and a 59-yarder — and couldn't stop the Raiders and force a punt in the final minutes of a 40-32 defeat.

The very simple question facing the Chiefs on Monday: What went wrong?

“We just didn't finish the right way,” Chiefs safety Tyrann Mathieu said. “In the run game, even in the pass game, we didn't finish how we normally would. Even when we get in certain zone coverages, we didn't match them as well as we've done in the past. We'll grow from it, we'll learn from it, but hats off to them. They made the plays that counted.”

The Chiefs (4-1) had every opportunity to extend their franchise-record 13-game winning streak another week.

Despite allowing those three TD passes in the second quarter, the Chiefs were still tied 24-24 at halftime, and they managed to hold Las Vegas in check during a scoreless third quarter. But with their offense continuously misfiring, the defense finally gave up a pair of touchdown runs to Josh Jacobs and Daniel Carlson's field goal over the final 15 minutes.

And when Patrick Mahomes led the Chiefs to a TD and 2-point conversion down the stretch, their defense allowed Jacobs to rumble for a first down and Carr to sneak for another to clinch the Raiders' first win at Arrowhead Stadium since 2012.

“They had a heck of a game plan,” Jones said. “They came out with some formation we hadn't seen on film and started to throw shots, especially out of the gun. They caught us off-guard a little bit. As a D-line, we harp on making sacks, affecting the quarterback, and we didn't execute. We have to do a better job.”

The offense may have struggled in the third quarter, but it still showed how dynamic it can be in marching 75 yards in 1:29 for a fourth-quarter touchdown that gave them a chance. Eight players caught passes, Clyde Edwards-Helaire averaged a respectable 4 yards per carry and Mahomes still finished with 340 yards passing and two TDs.

Mahomes and the offense did all that despite a line that couldn't stop the Las Vegas defensive front, even though the Raiders almost never rushed more than four. Mahomes has shredded defenses that have tried to blitz him into mistakes, but the Raiders got enough pressure out of their base defense that it took much of the pressure off their secondary.

The Chiefs made a concerted effort to get Tyreek Hill more involved in the game plan. He had three catches for 78 yards and three carries for 15 yards and a score. He also caught a 58-yard TD pass that was wiped out by a holding penalty and nearly had a 72-yard touchdown catch — a questionable no-call on pass interference caused him to drop it.

Everybody in the trenches had a rough day. The offensive line couldn't handle the Las Vegas defensive front, and their Chiefs counterparts barely touched Carr all afternoon. The KC defensive line also couldn't contain Jacobs and the Raiders' other running backs in the fourth quarter, when the outcome was still hanging in the balance.

Guard Kelechi Osemele, who already was replacing the opted-out Laurence Duvernay-Tardif, will miss the rest of the season after tearing ligaments in his right knee. Middle linebacker Anthony Hitchens spent much of the game in and out of the lineup because of a hand injury, and wide receiver Sammy Watkins left with a hamstring injury.

539 — Tight end Travis Kelce had eight catches for 108 yards and a score, giving him 539 catches for his career and moving him past Dwayne Bowe for the second most in Chiefs history. Tony Gonzalez had 916 catches from 1997 to 2008.

The Chiefs were supposed to visit Buffalo on Thursday night, but the NFL juggled the schedule Sunday because of COVID-19 protocols and pushed their game to next Monday night. That gives the Chiefs three extra days to fix the many issues that popped up against Las Vegas, including penalties — they had 10 of them and two that wiped out touchdowns.