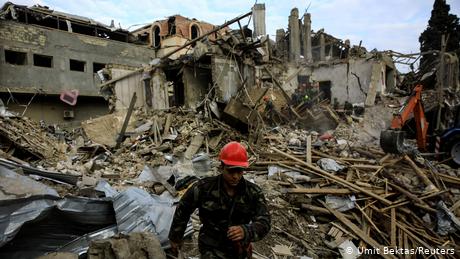 If it were internationally recognized as a country, Nagorno-Karabakh would have one of the smallest economies in the world. With GDP at just $713 million (€603 million)in 2019, it ranks lower than most Caribbean and Pacific islands.

GDP in dollar terms, however, only tells part of the story. The formerly autonomous region of Azerbaijan, now populated and controlled by ethnic Armenians, has sustained economic growth at around 10% over the past decade — and more than 17% in 2017, according to local government statistics cited by the Russian business newspaper RBC.

Those economic achievements will quickly fall by the wayside if a temporary ceasefire fails to hold and the renewed fighting of the past two weeks is sustained. More than 400 people have been killed in Karabakh since September 27.

Read more: EU fails to act on Nagorno-Karabakh conflict between Armenia and Azerbaijan

Primarily a conflict over an ethnic and territorial dispute that pre-dates the collapse of the Soviet Union, regional experts say the economic woes affecting the warring parties may have helped prompt a return to hostilities.

"The coronavirus, together with the collapse in the oil price, has hurt Azerbaijan's economy just as it was implementing much-needed reforms," journalist and South Caucasus expert Silvia Stöber told DW, referring to the endemic corruption that has been fueled by its energy-dependent economy.

Despite attempts to diversify, the oil and gas sector still makes up around 40% of Azerbaijan's GDP and is responsible for 90% of exports. From January to April, exports fell by a quarter, according to the European Bank for Reconstruction and Development (EBRD), which also predicts GDP will sink 3% year-on-year. EBRD noted that the strict lockdown measures introduced earlier this year hit the domestic economy hard, particularly the financial sector.

Armenia too, which last year recorded its strongest growth since 2007 at 7.6%, is expected to see a contraction of 3.5% in 2020, according to EBRD. Stöber said Armenia had been rolling out its own reforms to tackle decades of corruption that sparked the 2018 Velvet Revolution when the health emergency hit in March.

The country, which relies on hundreds of millions of dollars in foreign currency remittances from its 11 million-strong diaspora, saw its revenues dry up, she added. At the height of the first wave of the pandemic, EBRD said money transfers from abroad dropped nearly 40%.

"The conflict is a distraction from the economic and social situation," Stöber told DW, "It has encouraged people — even those critical of their governments — to rally around their flag."

A lasting conflict has the potential to cause significant economic damage in the region, and both country's energy infrastructure could be targeted. Earlier this week, Azerbaijan complained that the Baku-Tbilisi-Ceyhan oil pipeline was attacked by Armenian rockets — remarks that Yerevan insisted were "outright lies."

Read more: Half of Nagorno-Karabakh's population displaced by fighting

Azerbaijan's main oil and gas pipelines, heading for the European market, snake through Georgia and Turkey. Armenia's energy, meanwhile, is supplied by pipelines from Russia and Iran.

A protracted war could drag in regional powers: Turkey, which is Azerbaijan's closest ally, and Russia, which is on friendly terms with both sides and has a defense pact with Armenia. While Moscow has, so far, attempted to remain on the sidelines, Russian President Vladimir Putin could use the conflict as a way of pressuring Yerevan to accept even closer economic ties.

"Russia could stop this fight at any point," Ben Aris, editor-in-chief of the Berlin-based BNE Intellinews, told DW. "They did in 2016 when the conflict was only allowed to go on for four days, but this time, they've done nothing."

Putin plans to expand the Eurasia Economic Union (EAEU), the Russian equivalent of the European Union for former Soviet states, while Armenian Prime Minister Nikol Pashinyan is seen as too close to the West and could hamper that ambition.

Moscow, meanwhile, sells arms to both warring parties, while Ankara recently delivered Turkish-made drones to Azerbaijan, for $30 million. The oil-rich country has been a growing customer for Turkish weapons and military training.

Before the pandemic hit, Nagorno-Karabakh had a small but strong, diversified economy, heavily reliant on the extraction of minerals and precious stones and metals, including gems, gold, copper, and construction materials.

According to RBC, three-quarters of Karabakh's exports are sent to its neighbor and benefactor, where they can be relabeled as "Made in Armenia," while the rest go to Russia. The disputed region is even self-sufficient in electricity and even exports power from its hydroelectric dams to Armenia.

However, strict lockdown measures as a result of the health crisis have hit local supply chains, leaving many of Karabakh's exports stuck in Armenia, Aris said. The economy has contracted 1.5% this year, and is likely to plummet further as a result of the conflict.

A huge construction boom, funded by Armenian government subsidies and remittances from the country's diaspora abroad, has ground to a halt for now. Until recently, the creation of new villages and towns had smoothed the way for more ethnic Armenians to move into the region and build a better life.

"If you want a parallel, it's like Israel putting settlers into the Golan Heights," Aris explained.

Before the conflict flared up again, average incomes in Karabakh were slightly higher than in Armenia, he said, adding that due to the amount of business, construction, mining and manufacturing activity, "life in the breakaway region was relatively good."