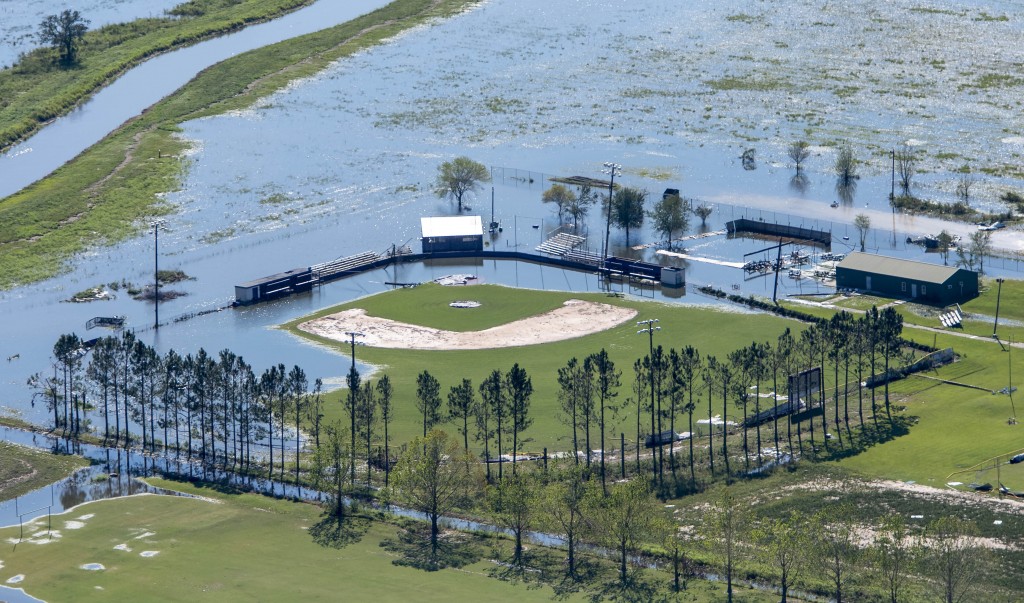 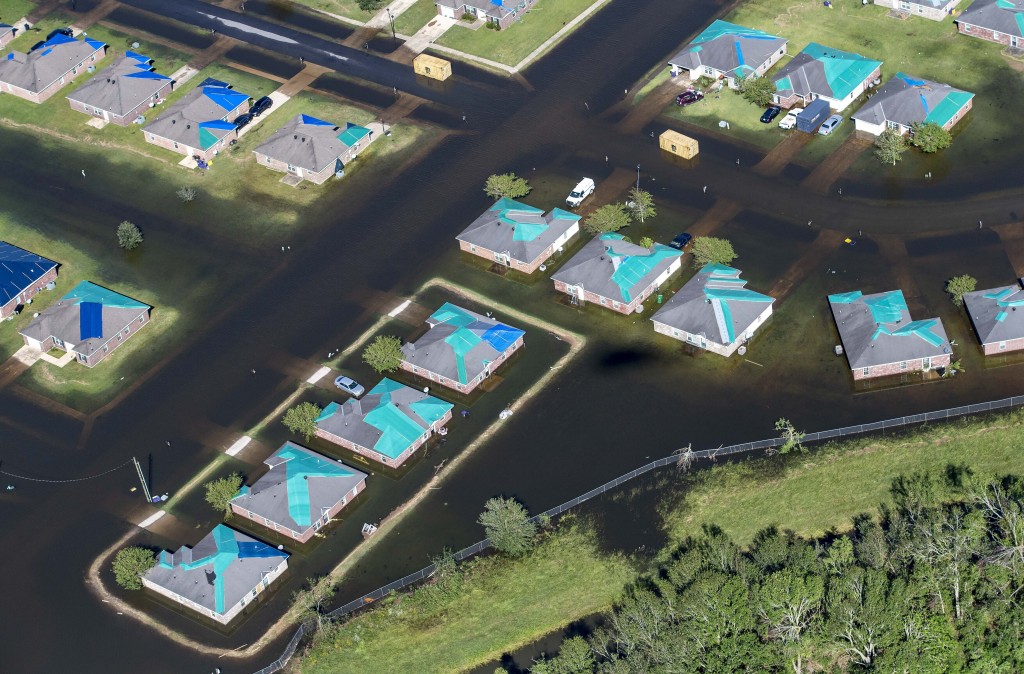 NEW ORLEANS (AP) — The Latest on Delta (all times CDT):

The Weather Prediction Center says in a 4 a.m. advisory that the once-major hurricane is expected to drop 3 to 6 inches (8 to 15 centimeters) of rain on parts of Georgia, the Carolinas and Virginia. Flash, urban and small stream flooding is forecast for those states, with the Calcasieu and Vermillion river basins in Louisiana in danger of moderate to major river flooding in the coming week.

Maximum sustained winds are around 30 mph (45 kph) and expected to weaken over the next several hours. Delta is forecast to dissipate over central Appalachian states by Sunday night.

Forecasters say a few brief tornadoes are possible in the Carolinas on Sunday.

ATLANTA — Remnants of Delta have triggered heavy rainstorms in parts of the Southeast, prompting flash flood and tornado warnings in the Atlanta area and other parts of Georgia. There were no immediate sightings of any confirmed tornadoes but fallen trees and other storm damage were reported.

WSB-TV reported one of the storms on Saturday heavily damaged a homeless shelter in Covington, east of Atlanta. One of the station's reporters visited the site and said the storm punched holes in the roof of the Rainbow Community Center. The report said about 20 men eating dinner inside got out safely and will be housed overnight in a nearby gymnasium.

Elsewhere, emergency officials said low-lying roads in parts of Atlanta and its suburbs were inundated by heavy rains and there were reports of downed trees.

He told southwest Louisiana residents on Saturday, a day after Delta's landfall: “We’re going to work as hard as we can as fast as we can to get everybody’s lives right side up again. As if Hurricane Laura wasn’t enough.”

He added: “We have tens of thousands of Louisianans today who are hurting, and we need to lift them up both in prayer, but also by our deeds.”

The governor says still no deaths have been reported from the storm. But he continued to urge people to be cautious in their recovery work and in their use of generators.

Seven of the 32 deaths attributed to Laura came the day that hurricane struck weeks ago. But many others were caused by carbon monoxide poisoning from generators.

“Laura was much more destructive in terms of the wind damage. ... but there was more water from this one,” Edwards said.

MIAMI — The remnants of Hurricane Delta are now spreading rain and winds across parts of Mississippi, Arkansas and Alabama as the tropical depression heads inland.

The National Weather Service said Saturday afternoon that between 3 and 6 inches (7 and 15 centimeters) of rain could fall in spots around the Southeast in coming hours, raising the risk of flash flooding and isolated minor river flooding.

Places in the forecast path of the storm include the Appalachian region of far northeast Georgia, the western Carolinas and western Virginia. Forecasters say parts of northern Alabama and the Tennessee Valley into the MidAtlantic region could see between 1 and 3 inches of rain (2.5 and 7.6 centimeters) of rainfall from the remnants.

Delta crashed ashore Friday evening in southwest Louisiana as a Category 2 hurricane and then began weakening quickly over land.

MIAMI — A handful of counties in Alabama and Georgia, including those encompassing the cities of Montgomery and Atlanta, are under a tornado watch until Saturday evening.

The National Weather Service said the watch was in place until 9 p.m. local time. A tornado watch means weather conditions are favorable for tornadoes. A warning means a tornado has been indicated or seen on a weather radar.

Delta stormed ashore late Friday as a Category 2 hurricane, but has weakened significantly since. The center of the storm hit land at 6 p.m. Friday near Creole, Louisiana, with top winds of 100 mph (155 kph).

MIAMI — A hurricane that swept ashore in Louisiana less than 24 hours ago has weakened to a tropical depression and is bringing heavy rain to western Mississippi.

The National Hurricane center says maximum sustained winds of what was once Hurricane Delta were clocked at 35 mph (55 kph) at around 10 a.m. local time Saturday.

Delta was centered about 65 miles (105 kilometers) north-northwest of Jackson, Mississippi, and was moving northeast at 16 mph (26 kph).

Hurricane Delta made landfall as a Category 2 storm in southwestern Louisiana. The center of the storm hit land at 6 p.m. Friday near Creole, with top winds of 100 mph (155 kph).

Sheriff Tony Mancuso of Calcasieu Parish told KPLC-TV early Saturday that vehicles were overturned on Interstate-10 westbound and said area residents who evacuated should not be in a rush to return.

He said the situation remains “dangerous.”

Still, he said anyone who cannot afford to be gone for more than several days can head back, but with caution. He said people just need “to use some good common sense.”

He said rising water is the biggest problem, and areas prone to flooding have been flooded.

MIAMI — Tropical Storm Delta is sliding over northern Louisiana with weakening winds after dropping several inches of rain in the state.

Maximum sustained winds were at 40 mph (65 kph) Saturday morning, according to the National Hurricane Center. The system is expected to further weaken to a tropical depression later in the day.

Delta is centered about 45 miles (70 kilometers) east of Monroe, Louisiana. The storm is forecast to continue moving to the north-northeast over parts of Mississippi and into the Tennessee Valley through Sunday.

MIAMI — Wind speeds associated with Tropical Storm Delta are decreasing as the system moves inland over Louisiana and Mississippi.

The National Hurricane Center says in its Saturday morning update that maximum sustained winds are at 45 mph (75 kph). That's down significantly from when the storm came ashore Friday evening as a Category 2 hurricane with top winds of 100 mph (155 kph).

All watches and warnings for Delta were discontinued in the 4 a.m. advisory. Forecasters say the system will continue its path over northern Mississippi Saturday morning and into the Tennessee Valley throughout the rest of the weekend.

The threat for tornadoes remains Saturday for eastern Mississippi, Alabama, the Florida Panhandle, and western and central Georgia, forecasters said.

MIAMI — Delta has been downgraded from a once powerful hurricane to a tropical storm as it moves inland across the U.S. South.

The National Hurricane Center in Miami said Delta came ashore Friday evening in southwest Louisiana as a Category 2 hurricane but quickly weakened and has become a tropical storm as it moves inland. By Saturday morning, it had maximum sustained winds of 60 mph (95 kph).

Forecasters say the storm is moving to the north-northeast on a track across central and north Louisiana that is expected to continue through Saturday morning.

The system is expected to become a tropical depression later Saturday as it moves across northern Mississippi into the Tennessee Valley.

Power outages in Louisiana and neighboring Texas neared 600,000 homes and businesses early Saturday, according to the tracking website PowerOutage.us. Almost 40,000 outages were reported in Mississippi.

The National Hurricane Center in Miami said Delta was centered at 8 p.m. CDT about 20 miles (35 kilometers) east-northeast of Lake Charles, the main city in the region. Maximum sustained winds have dropped to 85 mph (140 kph) and forecasters say Delta is expected to weaken to a tropical storm in coming hours as it heads deeper into the South.

The hurricane center warns heavy rainfall remains a threat in parts of Louisiana through Saturday as the storm crosses the state. It says that could lead to major river flooding. Additional flooding is possible elsewhere this weekend around the central Gulf Coast and lower Mississippi Valley, according to the forecast.

LAKE CHARLES, La. — The mayor of Lake Charles in southwest Louisiana says tarps that were put up to protect buildings damaged six weeks ago by Hurricane Laura are now flying off in Hurricane Delta's strong winds.

Mayor Nic Hunter told The Associated Press tarps were being ripped away from rooftops. He was hunkered down in a secure location in downtown Lake Charles.

“Tarps are being blown off all throughout the city,” Hunter said by phone after Delta made landfall Friday evening as a Category 2 hurricane.

He added: “I’m in a building right now with a tarp on it and just the sound of the tarp flapping on the building sounds like someone pounding with a sledge hammer on top of the building. It's pretty intense."

He said piles of unsecured debris from Laura are also being tossed about in Delta's high winds. He said some of the debris was moving into the streets and floating in water.

Hurricane Delta has weakened to a Category 1 storm as it moves inland along Louisiana’s southwestern coast.

The storm was about 25 miles (40 kilometers) west-southwest of the town of Jennings and moving north-northeast at 14 mph (22 km/h).

Delta blew ashore in an area where devastation remains widely evident from Hurricane Laura, which caused at least 27 deaths in late August.

Hurricane Delta has made landfall as a Category 2 storm in southwestern Louisiana.

Delta blew ashore in an area where devastation remains widely evident from Hurricane Laura, which caused at least 27 deaths in late August. Piles of wreckage could go flying and many homes remain unrepaired, with only blue tarps on rooftops to withstand the fury of yet another hurricane.

The above item has been updated to correct that Delta’s maximum winds were 100 mph at landfall.