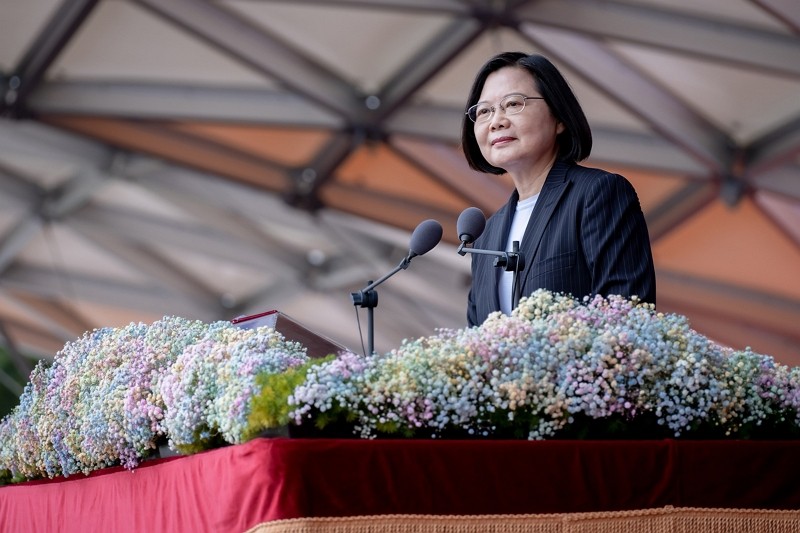 Hu Xijin (胡錫進), editor-in-chief of China’s state-run mouthpiece the Global Times, said in his Weibo blog that Tsai’s comments on cross-straits relations on Taiwan's National Day had been “the softest” in years.

“The change of tone indicated the Tsai administration has fathomed the severity of a possible military conflict with Beijing over its provocations,” said Hu.

In a rebuke to Tsai’s proposal for a “meaningful dialogue” with China, Hu added that Beijing must not “be fooled into believing the gesture of goodwill of the ruling Democratic Progressive Party of Taiwan” and that “continued military muscle-flexing is the only answer to cross-strait stability.”

Amid ratcheted-up Chinese Air Force maneuvers near Taiwan in the past few weeks, Tsai addressed the nation by saying that “if Beijing can heed Taiwan's voice, change the way it handles cross-strait relations, and jointly facilitate cross-strait reconciliation and peaceful dialogue,” she believes regional tension can be reduced.

The remark was seen as an effort by the government of Taiwan to extend an olive branch towards China, which has ramped up military activity including sending warplanes crossing the median line of the Taiwan Strait that serves as an unofficial buffer zone. The activity has been described by Beijing as a response to “collusion” between the U.S. and Taiwan, wrote Reuters.

Praising Tsai for being such a responsible leader to call for regional peace, MAC lashed out at Hu for his malicious Weibo comments, describing them as “intended to flare up conflict.” MAC also urged the Chinese government to “rein in” its state media against making imprudent remarks, wrote CNA.

Apparently not impressed by Tsai’s well-intentioned comments, China’s Taiwan Affairs Office of the State Council said in a statement that the two sides can only resume dialogue based on the “1992 consensus.” The term is a reference to an alleged agreement reached during a meeting in 1992 by the two sides of the strait that recognized there is only one China.