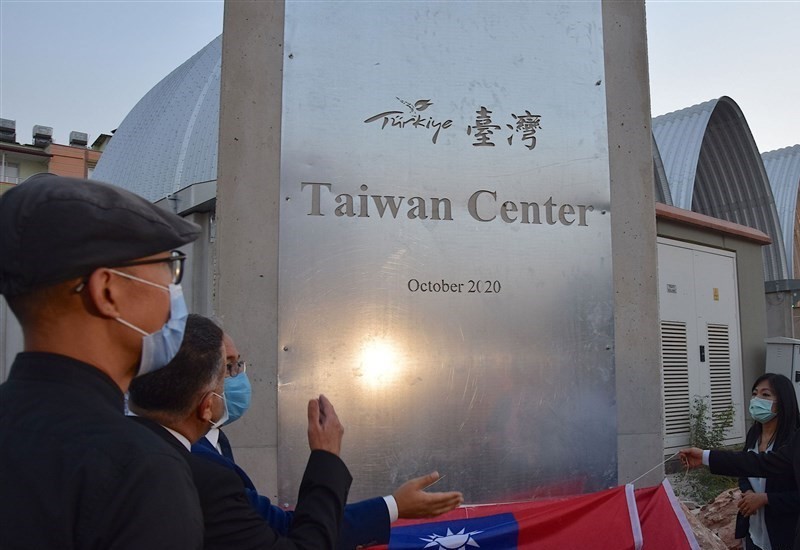 A Taiwan-funded civic center located on the border between Turkey and Syria was completed on Friday after a year of construction.

The building, called the Taiwan-Reyhanli Centre for World Citizens and located in Reyhanli, Hatay Province, southeastern Turkey, is expected to serve as a bridge among Taiwan, Turkey, and Syria once it is opened, said Yaser Cheng (鄭泰祥), Taiwan's representative to Turkey. At the completion ceremony, Cheng and Reyhanli Mayor Mehmet Hacioglu unveiled a steel plate inlaid on the building that read "Taiwan Center" in English, with the word "Taiwan" also written in two Chinese characters.

The civic center consists of 52 multipurpose rooms, which will provide a wide range of functions, including offices, classrooms, shops, coffee shops, and artists' workshops. The venue is also expected to serve as a design center and plant to roll out cultural innovation products and local specialties made by Turkish residents and Syrian refugees.

Since Syria plunged into civil war in 2011, almost 120,000 refugees from the country have fled to neighboring Reyhanli. As the Turkish city has a population of about 100,000, the density of refugees to the local population is highest among all of the Turkish cities along the border with Syria.

Cheng said the civic center will invite the Turkish government, as well as enterprises and non-government organizations from around the world, to station their representatives there, adding that Taiwan's government and private sector will continue to pour resources into the project in the future. Cheng added that he had faith in the Taiwan Center will become a bridge to connect people in Taiwan, Turkey, Syria, and around the world.

For his part, Hacioglu said although Taiwan and Turkey are far apart, both will continue to support each other, expressing hope the two sides will have more cooperation. Hacioglu also wished Taiwanese people peace and good health.

The Reyhanli City Government has appointed Chiu Chen-yu (裘振宇), the lead architect of the construction project, as the chief executive officer of the civic center. Chiu said while the center's construction has been completed, the real challenges for the venue have just started, referring to the COVID-19 pandemic, which continues to plague Turkey and Syria.

"We will try our best to take on the crisis posed by the disease in the Turkey side between the borders with Syria," Chiu told CNA.

After the opening ceremony, a concert followed. Since the concert was held on the eve of the Oct. 10 National Day of the Republic of China (ROC), Taiwan's formal name, both national anthems of the ROC and Turkey were performed, with the countries' national flags hung up at the venue.