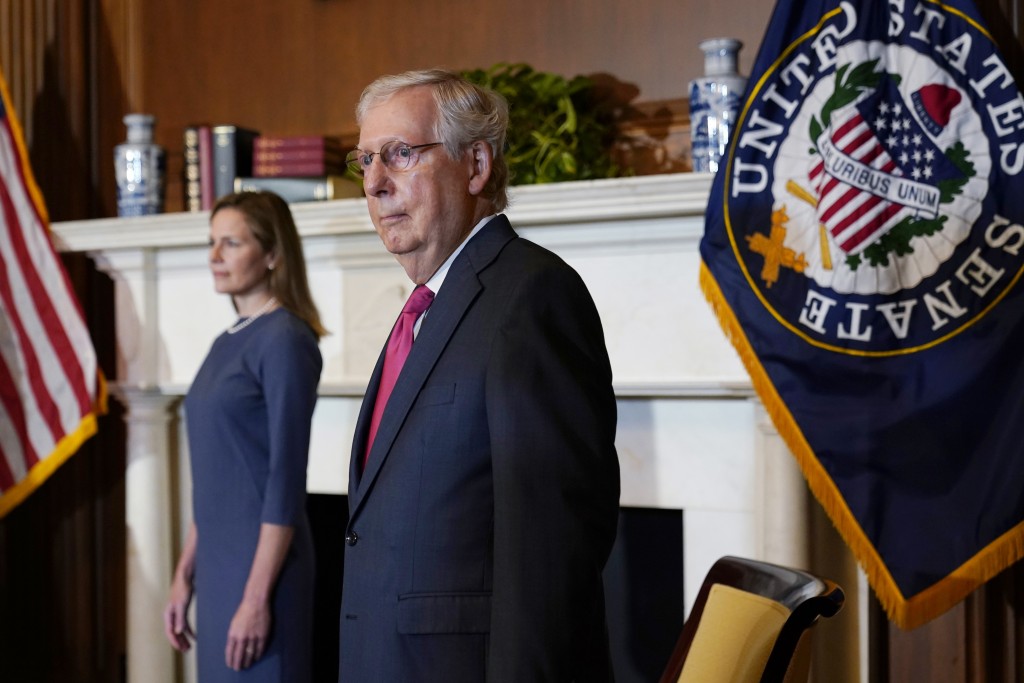 WASHINGTON (AP) — Senate Majority Leader Mitch McConnell spent a year prepping his Republican colleagues for this moment, telling them the confirmation a Supreme Court justice is the most important vote they will take as senators, the chance to make what he called seismic change that will stay with the nation for generations to come.

Now, three weeks before Election Day, the GOP leader needs this moment more than ever.

Confirmation hearings are set to begin Monday for President Donald Trump's Supreme Court nominee giving Republicans one last chance to salvage their Senate majority by wresting attention away from the White House and its COVID-19 response and onto the GOP’s longtime goal of fashioning a conservative court.

The arrival of conservative Judge Amy Coney Barrett offers a long-shot opportunity to bring wayward Republican voters back in the fold. As Trump's standing drops in internal polls, McConnell hopes to remind voters why they stuck with Trump in 2016: the promise of another conservative justice ruling on abortion access and other big issues. Democrats are within range of seizing Senate control Nov. 3.

“It’s going to do what it’s going to do -- energize the base,” said Doug Deason, a wealthy Dallas donor who is the Northern Texas fundraising chairman for Trump and helps congressional Republicans.

The more dour assessment is that McConnell is simply trying to grab whatever he can before he and his majority are out the door.

“To me, it just indicates a clear lack of confidence in Donald Trump and these Senate races,” said Stuart Stevens, a veteran Republican strategist who helmed Mitt Romney's 2012 campaign and now is among those trying to defeat Trump.

Democrats need to gain at least three seats to win the Senate majority if presidential nominee Joe Biden is elected, or four if Trump wins a second-term, because party’s vice president can vote as a tie-breaker in the Senate.

What started as an election cycle with just a handful of senators at risk has ballooned into an expanding Senate map from Alaska to inter-mountain West to the Deep South as Republicans face tough challenges, while Democrats see few.

Alarms are flashing red throughout Republican Senate campaigns after Trump's overbearing debate performance and COVID diagnosis sent the party's poll numbers cratering, particularly among the suburban white women and moms who helped elect him in 2016.

One Republican advising in Senate and House races called it the worst presidential dive in U.S. history — one that is bringing the entire GOP ticket down with it. It's something no amount of money can fix, the person said. The strategist, like others interviewed for this story, were granted anonymity to frankly assess the situation.

In group meetings and one on one, McConnell started raising the prospect of a Supreme Court vacancy last year, according to a person close to the leader.

He told them legislating can bring incremental changes but as senators they have few opportunities to make the more substantial, lasting shift that comes with a lifetime appointment to the court.

“He is personally, deeply committed to getting a great Supreme Court justice on the court,” said David McIntosh, president of the conservative Club for Growth who has worked with McConnell on judicial nominees for years, back to Ronald Reagan’s failed nomination of Robert Bork to the court.

With the death of Justice Ruth Bader Ginsburg Sept. 18, the plan was already set. Only two GOP senators balked at quick confirmation.

The hearings will spotlight Sen. Lindsey Graham, the chairman of the Judiciary Committee, who faces his own competitive re-election in South Carolina, where Democrat Jaime Harrison in raising millions to defeat him.

The panel includes Thom Tillis in North Carolina, who was in a tough race until opponent Cal Cunningham was caught up in a text-messaging scandal; and Texas Sen. John Cornyn, a party leader, is suddenly fielding off a challenger.

The confirmation battle could also bolster Sen. Martha McSally in Arizona, who is trailing former astronaut Mark Kelly, and it could help stem the sudden slide in GOP strongholds — Steve Daines in Montana, Kelly Loeffler in Georgia or in Kansas where Sen. Pat Roberts is retiring, strategists said.

On the flip side, the court battle is less helpful for Sens. Susan Collins in Maine and Cory Gardner in Colorado and and Joni Ernst in Iowa, where Trump was already less popular and now a drag on the GOP ticket.

Even far-flung races like Mike Espy’s challenge to Sen. Cindy Hyde-Smith in Mississippi are commanding attention and suddenly costing Republicans money to defend.

The televised hearings are likely to rake in cash for Democrats, with Vice Presidential candidate Kamala Harris taking her own center stage role as a member of the Judiciary Committee.

McConnell’s strategy is the opposite of the one Republicans used to boost turnout in 2016 when they blocked Barack Obama’s nominee nine months before the election, saying it should be up to the new president to decide. No high court confirmation in history is as close to a presidential election as this one.

This time, it's much about securing his own legacy reshaping the judiciary into what allies call the “McConnell Court” as giving his majority a landing pad after a tumultuous four years with Trump.

Republican senators linked themselves indelibly to Trump’s political movement, so much so that historian Douglas Brinkley has called it the “shrinkage” of the Senate — without that big name senators Americans may recall from history.

Many of the senators expected to run alongside Trump to another term. Then COVID-19 hit, the economy crumbled and Americans’ way of life ground to a halt.

The pressure was on McConnell, who is running for a seventh term in Kentucky without serious risk of defeat, not to wait until after the Nov. 3 election.

“More important to finish out the job,” McIntosh said.

Having already bent Senate rules to allow 51-vote threshold to advance Supreme Court nominees, rather than 60 as was tradition, McConnell is now poised to usher a third Trump justice to confirmation.

Critics have another view.

“It’s not going to be remembered as the McConnell Court,” said Stevens. “His legacy is going to be Donald Trump's enabler.”