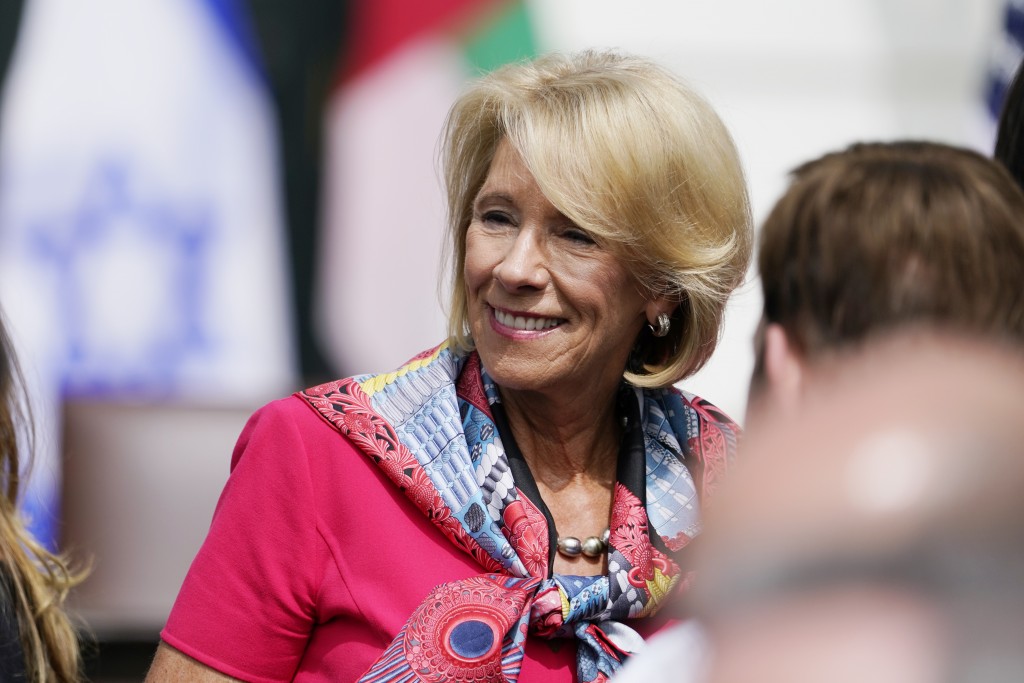 The Trump administration on Friday encouraged U.S. schools and colleges to rethink their ties to the Confucius Institute, a program that brings Chinese language classes to America but, according to federal officials, also invites a “malign influence” from China.

In letters to universities and state education officials, the State Department and Education Department said the program gives China a foothold on U.S. soil and poses a threat to free speech. Schools are being advised to examine the program's activities and “take action to safeguard your educational environments.”

“The presence of this authoritarian influence on our campuses has never been more concerning, nor more consequential,” officials wrote in the letters, which were signed by Secretary of State Mike Pompeo and Education Secretary Betsy DeVos.

More than 60 U.S. universities host Confucius Institute through partnerships with an affiliate of China's Ministry of Education. China provides teachers and textbooks and typically splits the cost with the university. The program also brings Chinese language classes to about 500 elementary and secondary classrooms.

The program has drawn mounting scrutiny from U.S. officials amid ratcheted tensions with China. In August, the State Department labeled the program's national office as a foreign mission of the Chinese Communist Party, which requires the program to submit reports about its operations and spending in the United States.

In Friday's letters, U.S. officials drew attention to China's new national security law in Hong Kong, which critics say curtails free expression and other liberties. The letters cite recent reports that some U.S. college professors are allowing students to opt out of discussions on Chinese politics amid fears that students from Hong Kong or China could be prosecuted at home.

Such fears are “well justified,” officials said, adding that at least one student from China was recently jailed by Chinese authorities over tweets he posted while studying at a U.S. university.

The Confucius Institute U.S. Center did not immediately respond to an emailed request for comment.

DeVos and Pompeo echoed longstanding complaints from academic groups that say schools give China too much control over what's taught in Confucius Institute classes. Teachers who are vetted and paid by the Chinese government “can be expected to avoid discussing China’s treatment of dissidents and religious and ethnic minorities,” the officials wrote.

“Confucius Institutes are branded as Chinese language and cultural learning centers, but there is increasing evidence that they are also tools of malign PRC influence and dissemination of CCP propaganda on U.S. campuses,” officials said, referring to the People's Republic of China and the Chinese Communist Party.

The letters do not explicitly urge schools to cut ties with the Confucius Institute but say the measure could avoid problems. Officials said many schools have built “excellent Chinese language and culture programs” without the Chinese government.

The move marks the Trump administration's latest attempt to curb China's presence in the U.S. amid a battle over trade, the coronavirus and human rights issues. Authorities have also asked universities to help stop the theft of trade secrets by scholars tapped by the Chinese government.

Once hosted at more than 100 universities, Confucius Institute has been closed on many campuses amid a drumbeat of criticism. At least 39 universities have announced plans to shutter programs since the start of 2019, according to a log published by the National Association of Scholars, a conservative nonprofit group.

Some of the closures were prompted by a 2018 defense bill that barred universities from using Defense Department money to support Chinese language programs if they also hosted a Confucius Institute. At the University of Maryland, which founded the nation’s first Confucius Institute in 2004, officials cited the bill in their decision to end the program this year.

Last year, a bipartisan Senate report encouraged all universities to cut ties with the Confucius Institute unless Chinese officials provided more transparency around the program and offered the U.S. equal opportunities for cultural outreach in China. Soon after, DeVos launched a crackdown on foreign gifts and contracts to U.S. universities, often focusing on financial ties to China.

Other nations have also sought to curb China's influence in their schools. In August, Australia’s most populous state, New South Wales, cut ties with the Confucius Institute and replaced the program with one funded by the state government. Canada's New Brunswick province has also announced it will end the program in its public schools.