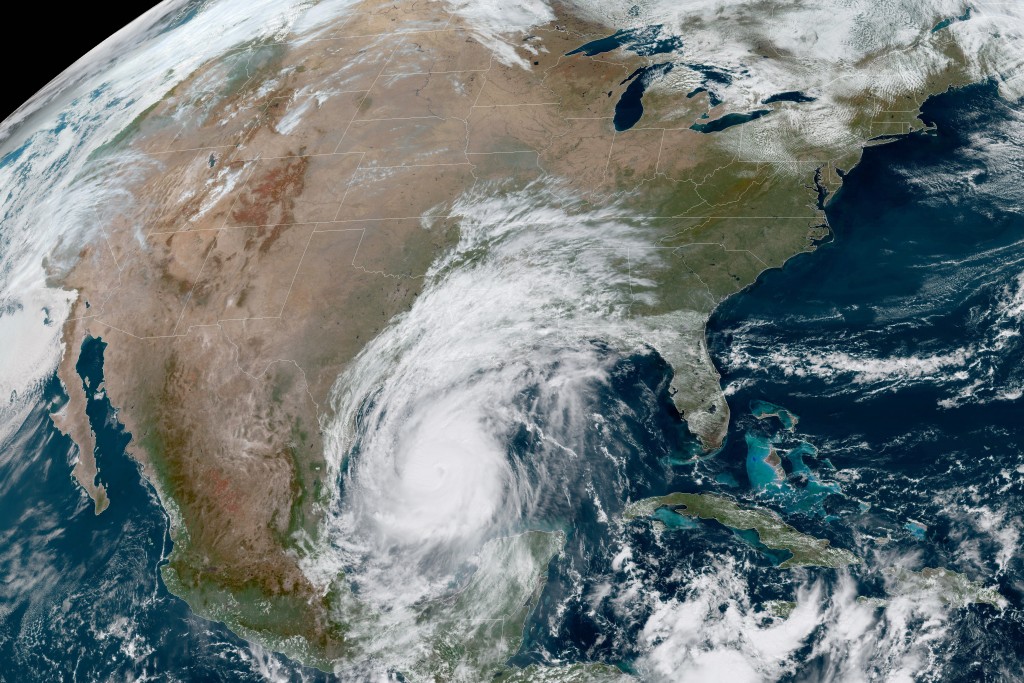 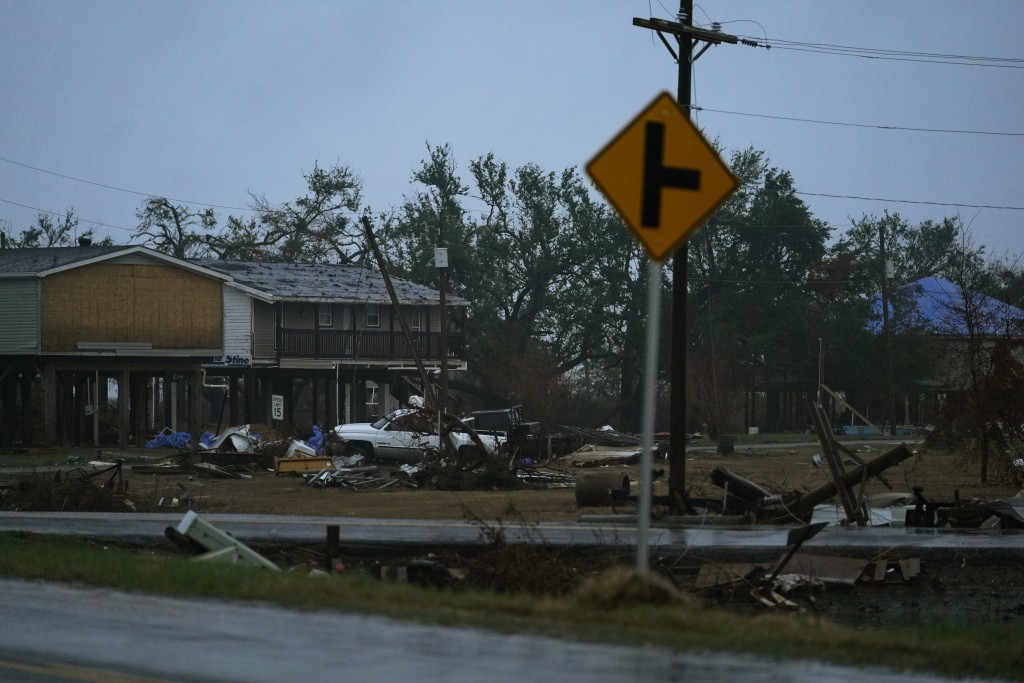 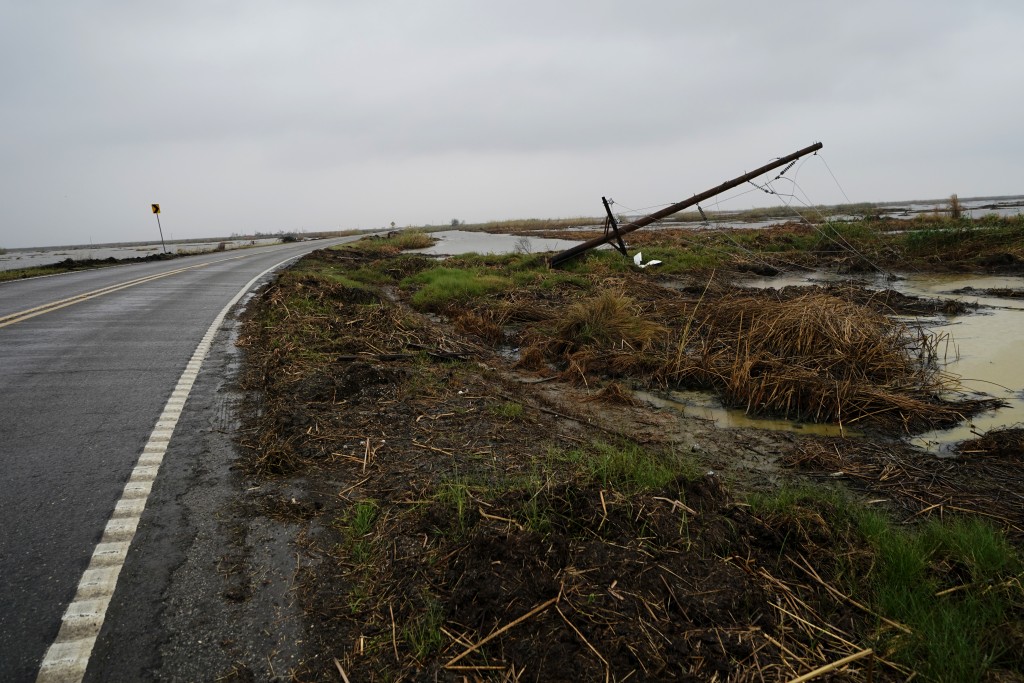 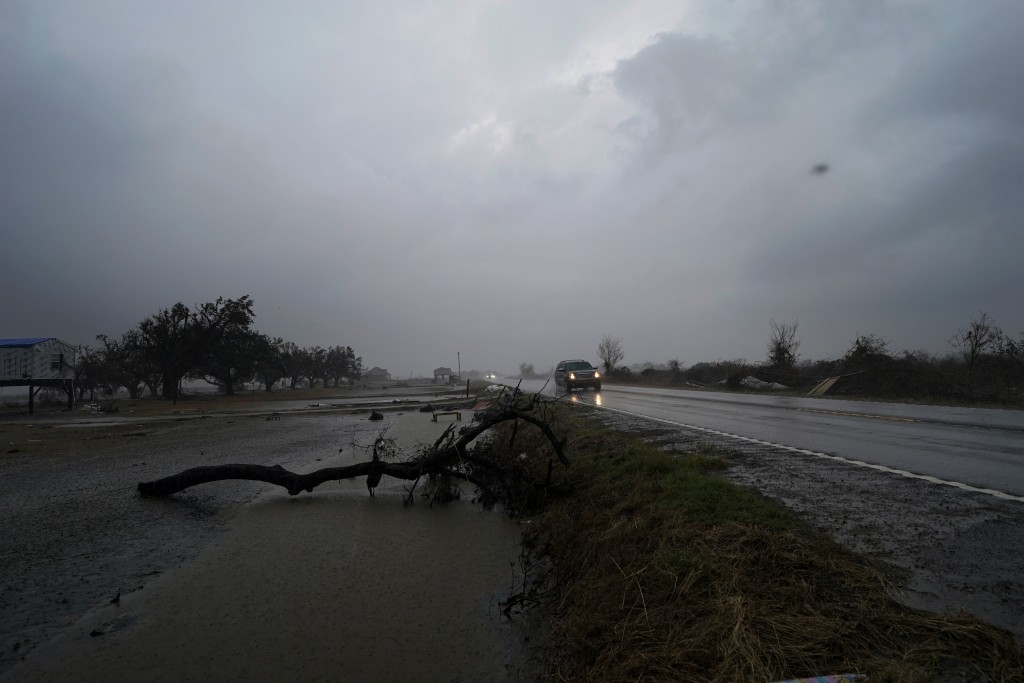 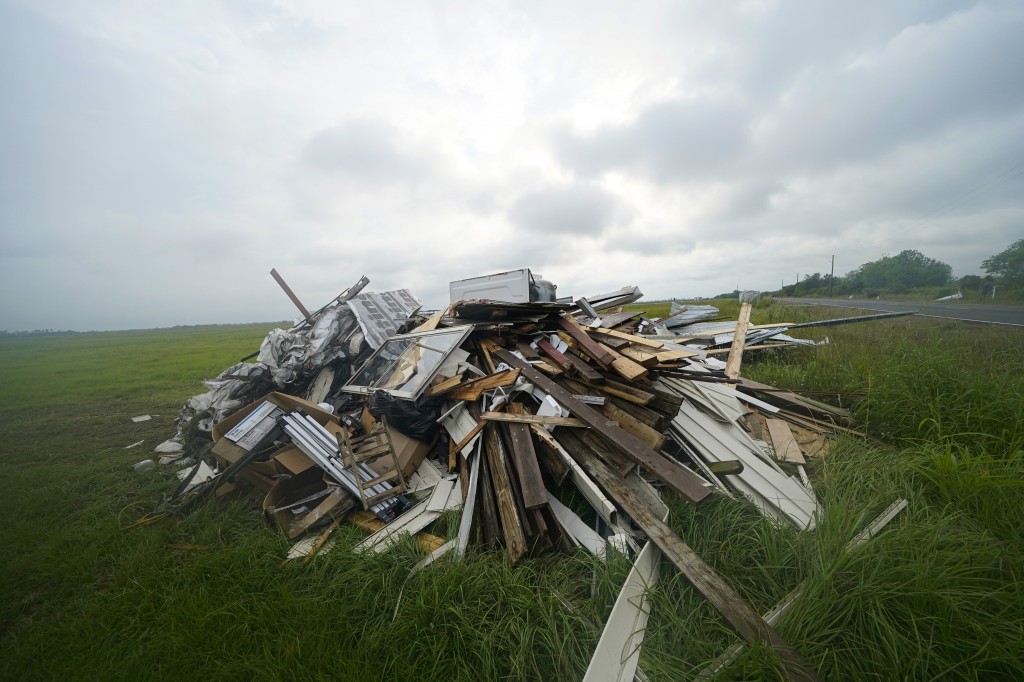 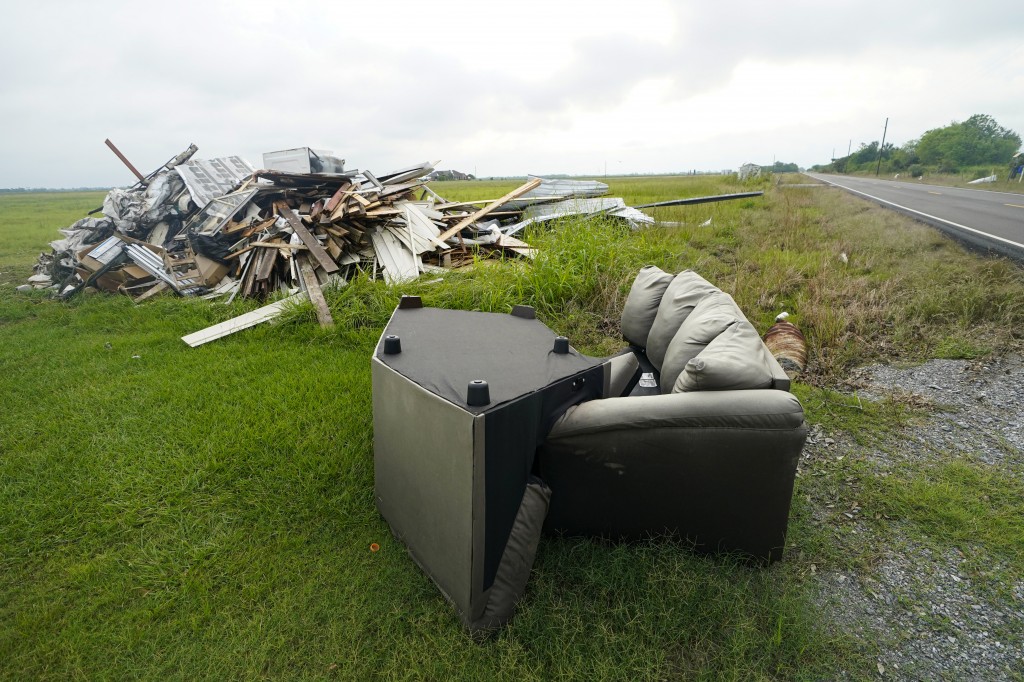 A hurricane warning, storm surge warning and tropical storm warnings are in effect for Hurricane Delta, a major hurricane spinning toward the U.S. Gulf Coast.

The National Hurricane Center says in a 1 a.m. advisory that Delta is centered 250 miles (400 kilometers) south of Cameron, Louisiana, with maximum sustained winds at 120 mph (195 kph).

The hurricane warning stretches from High Island, Texas, to Morgan City, Louisiana. The Category 3 system could strengthen slightly overnight before weakening as it approaches the coast, forecaster say.

Storm surge up to 11 feet (3.4 meters) is forecast for some areas. Delta is forecast to make landfall later Friday.

The National Hurricane Center in Miami said Delta could strengthen some more during the night hours but is expected to weaken as it nears the northern Gulf coast on Friday.

The above item has been corrected to update the latest wind speeds and position of Delta with information from the National Hurricane Center's 10 p.m. advisory.

MIAMI — Major Hurricane Delta is trekking ever closer to the northern U.S. Gulf coast, and forecasters say the storm could strengthen further during the nighttime hours.

At 7 p.m. CDT Thursday, Delta was centered about 310 miles (500 kilometers) south of Cameron, Louisiana. Its maximum sustained winds have increased recently to 115 mph (185 kph) and the storm is heading to the north-northwest at 12 mph (19 kph).

The National Hurricane Center in Miami said Delta should turn toward the north during the night and then more to the north-northeast on Friday. Forecasters say Delta will approach the coast Friday and howl ashore sometime in the afternoon or Friday night, most likely somewhere in southwest Louisiana.

Some weakening is expected as Delta nears the coast, forecasters added.

BELL CITY, La. — Huge piles of debris caused by Hurricane Laura in August stretched along roadways in Bell City, southeast of Lake Charles. Now the region is fearful of another hurricane strike, this time by Delta, in coming hours.

Some of the debris piles were more than 6 feet (2 meters) high and as long as 75 feet (22 meter) . Concerns mounted that Delta’s arrival would cause the uncollected debris to become airborne and turn into deadly projectiles.

Though homes and farmhouses in the area still stood as functioning structures, many rooftops with lingering damage from Laura were covered in blue tarps.

In Cameron Parish, power poles along Highway 27 in a desolate stretch of marsh were all either broken or leaning — none appeared to have been repaired since the August storm.

Further south, a church and a convenience store had been reduced by Laura to debris in the community of Creole. Exposed slabs were all that remained of many buildings, while some sheet metal buildings that still stood had gaping holes.

JACKSON, Miss. — Even though Louisiana is expected to take the brunt of Hurricane Delta's wrath, Mississippi Gov. Tate Reeves urged residents to stay vigilant and prepare for the worst-case scenario.

“There is a very good likelihood that while this is going to be a challenging event, it’s not going to be the kind of event that is talked about for the next 50 years, but that can change and when individual Mississippians, if they were to make bad decisions, then bad things could happen,” Reeves said during a Thursday press briefing.

Hurricane Delta is expected to make landfall Friday evening in southwestern Louisiana. The storm is then expected to enter Mississippi in the late morning on Saturday, bringing heavy wind, a few feet of storm surge, moderate rainfall and possibly tornadoes.

Reeves signed a state of emergency declaration Wednesday, prompting the Mississippi Emergency Management Agency to prepare 11 shelters to be open on standby.

Reeves said those living in the coastal, southwestern parts of the state and the Mississippi Delta can expect winds between 45 to 65 mph (72 to 105 kph) after the storm enters the state. West, central and northern counties could also see around 2 to 4 inches (5 to 10 centimeters) of rain, with the rest of the state seeing 1 to 2 inches (2.5 to 5 centimeters). Coastal areas could see between 1 and 4 feet (0.3 to 1.2 meters) of storm surge.

BATON ROUGE, La. — Gov. John Bel Edwards called on southwest Louisiana residents still reeling from the late August destruction of Hurricane Laura to ready for Hurricane Delta, which has strengthened back into a Category 3 storm and is expected to hit the state Friday.

“It is very clear that southwest Louisiana’s going to take more of a punch from this than we would like to see for sure,” the governor said at a Thursday afternoon briefing.

“We’re highly confident of this track at this point,” Schott said.

Edwards says local shelters and the state’s mega-shelter in central Louisiana have been set up with families distanced from one another, in response to the coronavirus pandemic.

The governor said in a radio interview Thursday that southwestern Louisiana could be helped by the fast pace of Delta, which is expected to move in and out of the area more quickly than Laura.

But he also acknowledged the fragility of the region due to Laura, which damaged or destroyed thousands of homes. Many salvageable houses still are covered in blue tarps awaiting roof repairs or rebuilding.

“Those structures have not yet been repaired. The electrical infrastructure there is in the process of being repaired. And we’ve got people who are very tired. We’re still sheltering over 6,000 people from southwest Louisiana in 12 hotels, primarily in New Orleans,” Edwards said. “It’s going to be a very challenging situation.”

NEW ORLEANS — New Orleans is well to the east of the projected landfall area and was expected to escape the worst of Hurricane Delta. But tropical storm force winds were still likely in the city Friday. And city officials said they were preparing for the possibility of tornadoes being spawned by the storm.

“Tornadoes are going to be a threat here,” Lauren Nash of the National Weather Service said Thursday during a news conference with Mayor LaToya Cantrell and other city officials. Nash said tornadoes are a danger northeast of the storm’s center. “Tornadoes in hurricanes can form very quickly and usually will stay on the ground for only a few minutes.”

Tyrell Morris, the administrator for the city’s emergency call system, said that’s one reason staffing would be increased Friday. “Just a single instance of a tornado, even for just a few seconds, could overwhelm the 911 system,” Morris said.

LAKE CHARLES, La. — The mayor of one of the largest cities in southwestern Louisiana is urging people to consider leaving the area ahead of Hurricane Delta.

Lake Charles Mayor Nic Hunter posted strong warnings in a Facebook video Thursday morning to his city, which was already ravaged by Hurricane Laura in August.

“This is not a bad dream. It’s not a test run. These are the cards that we have been dealt,” Hunter said in the video.

Thousands of homes were damaged or destroyed by Laura in the region. Many salvageable houses still are covered in blue tarps awaiting roof repairs or rebuilding.

Hunter says people without transportation should go to a city bus stop and head to the local convention center, where state-administered buses will take them away from the area to a shelter site elsewhere in the state.

He told residents that even if their home survived Laura, they shouldn’t assume that home will make it through Delta.

“I know that we’ve been through a lot and I know that we’re tired. But we have a job to do right now, and that job is to keep ourselves safe,” Hunter said.

CAMERON, La. — Hurricane Delta is continuing to churn toward the Louisiana coast, where it is expected to make landfall Friday evening.

The National Hurricane Center said Thursday morning that the Category 2 storm is about 400 miles south of Cameron, Louisiana. It has maximum sustained winds of 105 mph (165 kph) and is moving northwest at 14 mph (22 kph).

Most of Louisiana is within Delta’s path, including the southwest area of the state around Lake Charles, where Category 4 Hurricane Laura caused considerable damage in late August.

A hurricane warning is in effect from High Island, Texas, to Morgan City, Louisiana.

A storm surge warning is in effect from High Island, Texas, to Ocean Springs, Mississippi. Forecasters say the storm surge could be as high as 7 to 11 feet (2.1 to 3.3 meters) in places between Rockefeller Wildlife Refuge and Port Fourchon, Louisiana.

Edwards spokeswoman Christina Stephens said a 30-second robocall being sent to most landlines was warning residents that Thursday is the last day they have to get ready.

Officials are also sending text messages to people who have signed up to receive information from the governor’s office. The messages note that much of Louisiana is under tropical storm or hurricane watches because of Delta, and that residents should “prepare now and have your emergency plans in place.”

MONTGOMERY, Ala. — Gov. Kay Ivey has lifted a mandatory evacuation order for tourists along Alabama’s coast as Hurricane Delta steams through the Gulf of Mexico toward a likely landfall in Louisiana.

The National Hurricane Center has said the storm is likely to have a minimal impact on coastal Mobile and Baldwin counties.

Ivey said Thursday that local officials had agreed to rescind the evacuation order, but urged residents to still monitor the storm for potential storm surge and heavy rain.

Coastal areas are still recovering from Hurricane Sally, which made landfall last month at Gulf Shores. Officials worried that debris along roadsides and erosion on beaches and dunes could worsen problems should Delta hit Alabama.