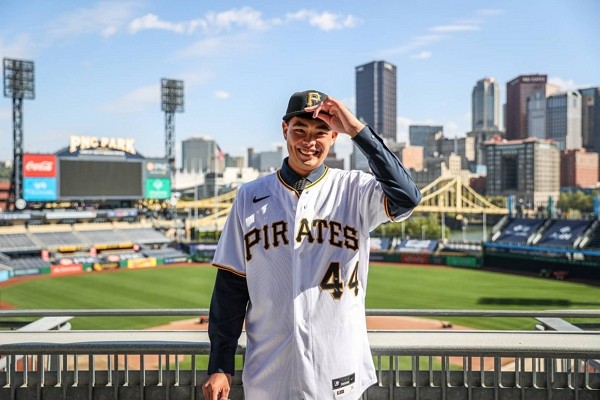 TAIPEI (Taiwan News) — Taiwanese pitcher Chen Po-yu (陳柏毓) has signed a contract with the Pittsburgh Pirates to become the country's latest athlete to appear on the international stage.

On Wednesday (Oct. 7), the Pirates announced they have signed the 19-year-old Taiwanese right-hander for a NT$1.25 million bonus, making him the highest-paid international amateur signee in the team history. Listed at 188 centimeters and 85 kilograms, Chen was a member of the 2019 U-18 world champion Taiwanese national team and pitched the final two innings in the gold-medal game against the U.S.

In a statement posted on the MLB website, Pirates General Manager Ben Cherington praised Chen as an exciting young pitcher with good size and flexibility around the mound. He said the Pirates had scouted Chen extensively and view him as the equivalent to a second-round-type talent in the MLB Draft.

Pirates scout Max Kwan noted that Chen came from a family of athletes, with his father Chen Ping-nan (陳炳男) being a former player in Taiwan's Chinese Professional Baseball League (CPBL). He said Chen has demonstrated dominance in international matches and has the potential to become an excellent starting pitcher in the MLB, reported CNA.

When asked about the signing, Chen credited his success to his family and their constant encouragement. He said his father was the person who introduced him to baseball and has given him support on and off the field.

Chen said he understands the signing was merely an "entrance ticket" to the MLB and that there will still be countless challenges for him to overcome. He said he is willing to give his best effort to become a better player, reported UDN.

Some videos I took of Taiwanese RHP Po-Yu Chen from his game vs. Panama today. Chen is considered a top Taiwanese pitching prospect eligible to be signed in 2020. Lots of ML scouts in the stands to watch him.