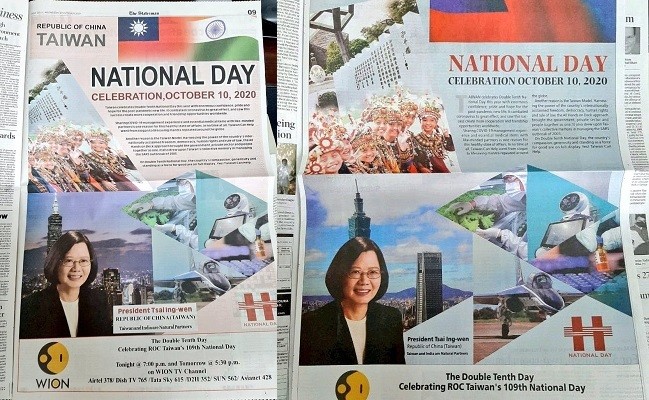 On Wednesday, full-page advertisements appeared on India's newspapers announcing that India's WION will broadcast a 25-minute special report on Taiwan's National Day event at 7 p.m. that evening and at 5:30 p.m. the next day. The broadcast is a collaboration between WION and the New Delhi Taiwan representative office as a way to promote the holiday in lieu of traditional face-to-face festivities due to the Wuhan coronavirus (COVID-19) pandemic.

That same day, the Chinese embassy in Delhi sent a threatening letter to Indian media outlets admonishing them that there is "only one China in the world," and that the autocracy in Beijing is the "sole legitimate government representing the whole of China."

It then repeated the Chinese Communist Party's (CCP) mantra that "Taiwan is an inalienable part of China's territory." The letter ordered Indian media to "stick to" the Indian's government's position on the "Taiwan question" and not violate the "one China" principle.

The document then demanded that Indian news outlets not refer to Taiwan as a "country (nation)" or refer to "the leader of China's region" as "President." The embassy reasoned that these conventions are necessary in order to avoid sending "the wrong signals to the general public."

WION’s diplomatic and national defense correspondent Sidhant Sibal, independent journalist and show host Aditya Raj Kaul, and many other Indian media professionals have tweeted the warnings from the Chinese embassy, sparking outrage in India. With tensions still at a fever pitch over the border dispute in Ladakh, many Indians are angered at China's demand that Indian journalists honor its territorial integrity and "one China" policy while China fails to recognize India's borders and eschews India's "one India" policy.

On Wednesday evening, Wu posted a tweet on the official Twitter page for the Ministry of Foreign Affairs (MOFA) pointing out that India is the largest democracy in the world with freedom of the press, yet China is trying to impose censorship on its media. He then predicted that "Taiwan's Indian friends" will react to such bullying by saying "GET LOST!" He then ended his tweet with his initials to make it clear that the head of MOFA had made the statement.

Breaking: Ahead of the National day of Taiwan, Chinese embassy in Delhi sends a letter to Indian Media. Says,"would like to remind our media friends that there is only one China in the world". pic.twitter.com/MHj4fz4xYK

#India is the largest democracy on Earth with a vibrant press & freedom-loving people. But it looks like communist #China is hoping to march into the subcontinent by imposing censorship. #Taiwan's Indian friends will have one reply: GET LOST! JW https://t.co/XxkSSxj5ms 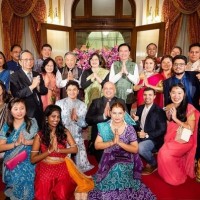