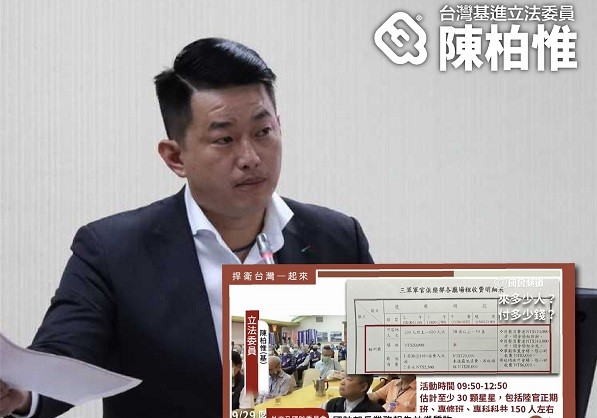 TAIPEI (Taiwan News) — Taiwan Statebuilding Party (TSP) Legislator Chen Po-wei (陳柏惟) on Tuesday (Oct. 6) blasted a retired general's claims that Taiwan's defense capabilities were "zero" as a "dereliction of duty" and called for his pension to be terminated.

While speaking at the 70th-anniversary celebration of the nation's military academy on Sept. 29, retired Taiwanese general Chen Ting-chung (陳廷寵) said that Taiwan's combat strength is "zero" and that its military has "no chance in a war with the PLA." He then claimed that he is "proud to be Chinese" and that it was a "symbol of pride."

During a press conference held by the Taiwan Association of University Professors on Tuesday, Chen slammed the retired general's comments as "dementia and a dereliction of duty," and called for an end to his monthly pension of NT$190,000 (US$6,600), reported SET News. Chen said, "If someone commits dereliction of duty, the person must be arrested. If someone has dementia, they must be put in a nursing home. This person must be dealt with. The Republic of China should not continue to support him."

Chen said that during the annual meeting the general claimed, "Taiwan's combat power is zero, and Taiwan's president is ignorant and incompetent. We are all scum of the Chinese nation." Chen said that as an individual he has freedom of speech, but from the point of view of a member of the Foreign and National Defense Committee, he takes issue with the comment that Taiwan has "zero" defense capabilities.

Chen acknowledged the general's service in the 823 Artillery Bombardment, also known as the Second Taiwan Strait Crisis, but he found his comments unacceptable. He pointed out that since 2008, the former general has often made remarks about making peace with China, "one China" being an inevitable development in the future, and that Taiwan must unify with China.

The legislator said that as a retired general and soldier who should be focused on protecting the country, he should not make such comments that undermine the sovereignty and autonomy of the country. He said that he has expressed his concerns to the Veterans Affairs Council, Ministry of National Defense, and Republic of China Military Academy, but their response was "don't listen to him, don't watch him, and just ignore him."

He then stated, "I want to remind everyone that he has already received NT$60 million in pensions without anyone listening to him, watching him, or paying attention and he wants to continue to receive his pension." Chen asserted that relevant defense departments should not be so passive about such matters.

"If the retired admiral can do this, can the lieutenant general also do the same? What would the active-duty non-commissioned officers think about the tense cross-strait relations?" asked Chen. He added, "Taiwan should be like the rest of the world, that is, to define the Chinese Communist Party as a criminal organization and an evil organization."

"Starting in 2020, the whole world has realized that the Chinese Communist Party is an organization that endangers human survival, endangers world peace, and even endangers the earth. Taiwan should keep up with the pace," concluded Chen.