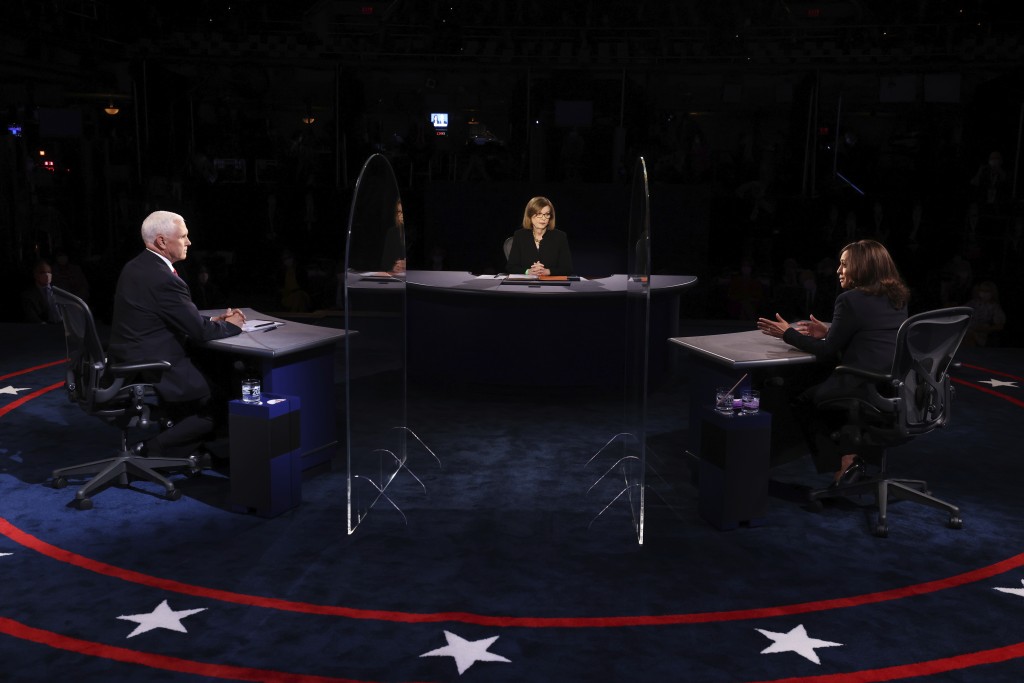 WASHINGTON (AP) — In normal times, vice presidential debates don't matter much. But in an election year as wild as 2020, everything is magnified.

California Sen. Kamala Harris stepped on stage having to balance her role as Joe Biden's validator with her own historic presence as the first Black woman on a major party national ticket.

The candidates were separated by plexiglass out of concern for spread of the coronavirus from cases emanating from the White House.

Here are key early takeaways from the only vice presidential debate ahead of the Nov. 3 Election Day.

Millions of Americans were aghast when Trump derailed the first presidential debate with incessant interruptions and a cascade of falsehoods, while Biden answered by calling the Republican incumbent a “clown” who needed to “shut up.”

The opening of Wednesday’s undercard matchup made clear that Pence and Harris were set for a much different encounter – an actual debate.

To be sure, there were sharp moments, some modest interruptions and violations of the debate clock. But the dynamics represented a rare 2020 return to some semblance of normal presidential politics.

Pence's even temperament has been a signature of his political career and he has often served as a kind of translator for Trump's bombast. Harris had a long career as a prosecutor, comfortable arguing her case under pressure. Both played to type.

In tone and content, their debate was like an alternate universe from the one Americans saw little more than a week ago.

The Trump campaign has wanted voters to focus on anything but the pandemic that has killed more than 210,000 people across the country and infected at least 7.5 million more. But that subject dominated from the outset, with Trump and a growing list of White House aides, campaign staff and allies now sidelined with COVID-19.

Harris immediately put Pence on the defensive, calling Trump’s pandemic response “the greatest failure of any presidential administration in the history of our country.” Trump and Pence “still don’t have a plan,” she said.

Pence shot back that much of Biden’s proposed coronavirus response is action the federal government already is taking. More clearly than Trump perhaps ever has done, Pence expressed sympathy for all those affected by the pandemic, and he accused Harris of “playing politics with people’s lives.”

In fact, Biden’s plan does have elements that Trump’s doesn’t. Biden has called for the president to issue a mask mandate on federal property and has urged governors and mayors to do the same. He has called for using other federal spending and regulatory power. But Harris skipped those details.

Harris was cautious about approaching the historic nature of her candidacy. She referenced thinking about her mother, an immigrant from India, on the day Biden invited her to join the Democratic ticket. But she stuck mostly to the talking points that any potential Democratic candidate could have offered.

Pence, on the other hand, embraced the opportunity to be magnanimous. “I also want to congratulate you … on the historic nature of your nomination,” Pence told Harris. “I never expected to be on that stage four years ago so I know the feeling.”

It was a grace note from Pence, something not heard from his boss the week before.

The fundamental cultural divide between the major U.S. political parties was on plain display, far more than when Trump and Biden stood onstage together.

Pence is a 61-year-old white man from small-town Indiana, and he embraces conservative cultural values, often citing his evangelical Christian faith. A former congressman and governor, he remains the most stabilizing link between the president and the pre-Trump Republican Party.

Harris, a 55-year-old Black and Asian American woman, hails from the same generation as Pence. But she’s the daughter of Jamaican and Indian immigrants. She attended newly integrated Oakland public schools and then an historically black college before ascending the California political ladder to the U.S. Senate and now a national ticket. For a party that gets most of its votes from women and much of its energy from non-whites and younger voters, she’s a more personal link than the 77-year-old Biden.

To be sure, the race is about the men at the top of the tickets. But when it comes to understanding the two parties’ core identities, the running mate picks offered a clear picture.

Both Pence and Harris used audience guests to make statements. Whether that resonates with most voters is another question.

Pence hammered the president’s “law and order” message with two guests. Flora Westbrooks’ Minneapolis hair salon was burned down in May during protests over George Floyd’s death at the hands of police. And Ann Marie Dorn is the widow of a retired St. Louis police captain who was shot to death on June 2 after a violent night of protests there.

Also joining Pence were the parents of Kayla Mueller, a humanitarian aid worker who was captured and killed by Islamic State militants in Syria. Their presence was meant to highlight Trump’s efforts to stamp out the group and bring captives home.

Harris picked two Utah women the campaign says represent the hard-working Americans a Biden-Harris administration would fight for: state representative Angela Romero, who has been working to support families and businesses affected by pandemic, and Deborah Gatrell, a veteran and teacher running for a seat on the Salt Lake County Council.

But in this debate, unlike the first presidential one, all the guests wore masks as required by the Commission on Presidential Debates. The penalty, after the Trump family flouted the guidelines by removing their masks a week ago, was being removed from the debate hall.