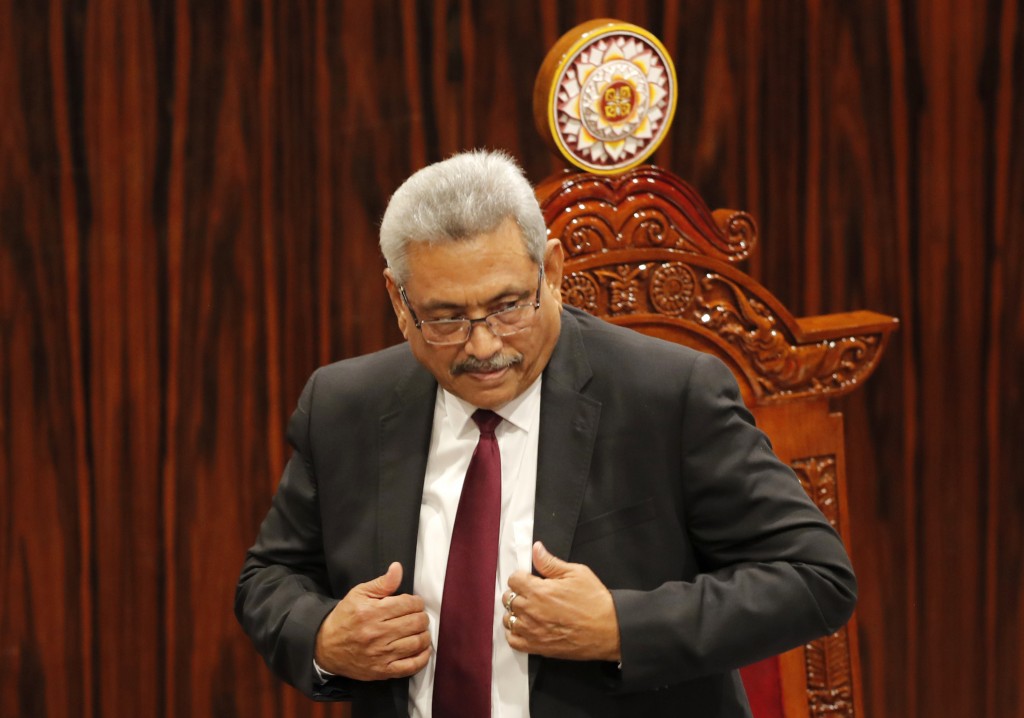 COLOMBO, Sri Lanka (AP) — A proposed amendment to Sri Lanka’s Constitution that would consolidate power in the president’s hands has raised concerns about the independence of the country’s institutions and the impact on ethnic minorities who fear their rights could be undermined by a nationalistic Sinhala Buddhist parliamentary majority.

If passed, the amendment will bring Parliament under the control of President Gotabaya Rajapaksa, who will have the power to dissolve the legislature, appoint top judges, have full immunity against any prosecution and make decisions critical for minorities, without checks.

Rajapaksa renounced his dual U.S citizenship when he ran for president last year. The proposal allowing dual citizens to hold political office would further strengthen the Rajapaksa family's grip on political power by enabling another sibling who is a dual U.S. citizen to be appointed to Parliament.

Rajapaksa was elected last November promising to be the guardian of the majority Buddhist-Sinhalese. His mandate was endorsed in August elections in which his party gained control of nearly two-thirds of the country’s 225-member Parliament.

His government is most likely to obtain the needed two-thirds support to pass the proposed amendment. However, several petitions have been filed in the Supreme Court seeking an order that the amendment also be subject to a public referendum.

The constitution says certain provisions must be approved by a referendum.

“The government is heading toward dictatorial governance by weakening checks and balances in the system,” said lawyer and independent political columnist Subramanium Jothilingam.

The amendment would allow Rajapaksa to head any number of ministries, appoint and fire ministers and select the police chief and members of the elections, public service, bribery and human rights commissions at his discretion.

Jehan Perera from the independent National Peace Council think tank said public institutions may become politicized and serve the interests of the majority Buddhist-Sinhalese community if they come under the authority of one person.

Rajapaksa’s election slogan of “one country, one law” is widely seen as a policy of centralized governance that rejects power sharing with the provinces, a long-standing demand of minority Tamils. Rajapaksa has rejected a Tamil demand for autonomy.

Government forces crushed the rebels in 2009, ending a war that claimed at least 100,000 lives.

Earlier this year, Rajapaksa withdrew Sri Lanka from a U.N. Human Rights Council resolution in which it had agreed to investigate allegations of wartime abuses by both government forces and Tamil rebels.

M.A. Sumanthiran, an ethnic Tamil lawmaker, said the weakening of Parliament would result in minority communities losing their voices.

“There will be power changing hands from the legislature to the executive. In the legislature all sections of the polity have a say, however small they may be,” he said. “Even if presidents win election with votes from minority groups, past experience has shown that they will only look after the interests of the majority community, from whom they received most of their votes.”

Many minority Tamils and Muslims say they are worried about the government’s proposed actions.

On Sept. 29, the government announced it will ban cattle slaughter, a decision analysts say was politically motivated to please the majority Sinhala Buddhist constituency. Buddhists as well as minority Hindus avoid beef for religious and cultural reasons.

Many believe the decision was a direct affront to the Muslim community, which owns most of the slaughterhouses and beef stalls.

Fazal Samsudeen, an Islamic preacher, said he fears government interference in religious laws, such as Islamic courts and banking, in the name of establishing a unified national law.

Jothilingam warned that a rise in nationalism could lead to conflicts with other countries, such as the United States and India, which have long called for power sharing with Tamil-majority provinces.

“The government is becoming a prisoner of ultra-nationalists. When you try to satisfy them, they will keeping increasing their demands and someday the government won’t be able to fulfill them without making enemies of powerful countries,” he said.

“A small country can’t survive if it is isolated by the world community.”