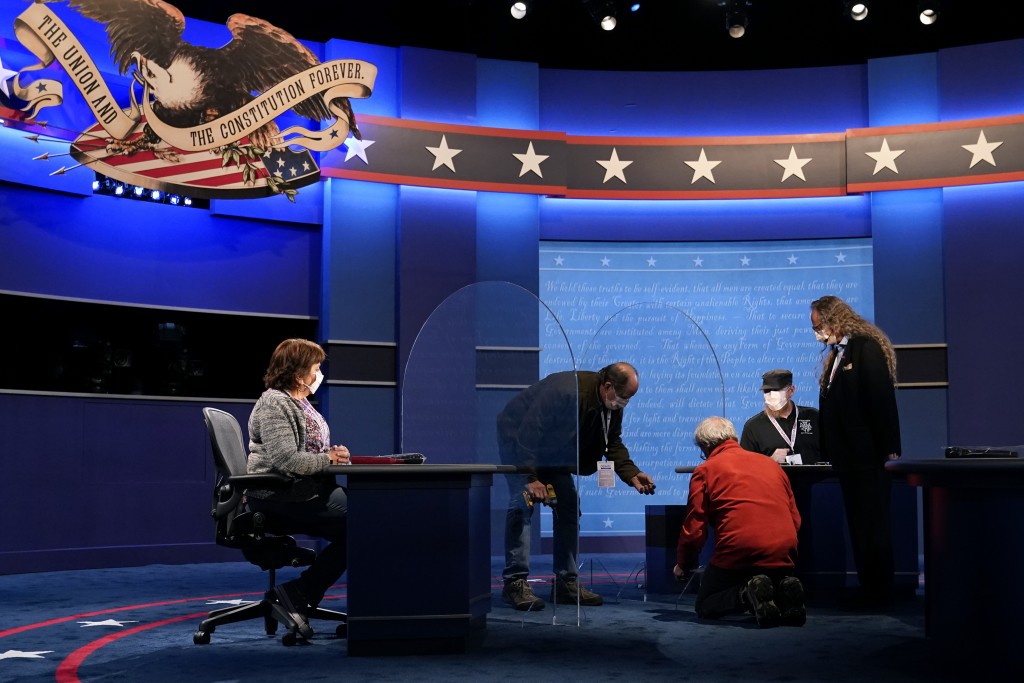 Mike Pence and Kamala Harris do not have a tough act to follow.

As vice president Pence has worked to level Trump’s roughshod style and steer his response to the coronavirus pandemic. He will face a U.S. senator known for sharp questioning who has made it clear she wants to invoke her prosecutorial chops on the debate stage.

The handling of the pandemic and the president’s contraction of COVID-19, along with several others in the White House, will almost literally be center stage. Pence and Harris are expected to be separated by a plexiglass shield to reduce the risk of virus transmission.

The debate starting at 9 p.m. EDT at the University of Utah is the only matchup scheduled between Pence and Harris.

Expect Pence and Harris to have starkly different assessments of the way the Trump administration has responded to the virus that’s killed more than 210,000 Americans. Pence has led the White House’s coronavirus task force, taking a high-profile spot at White House briefings, projecting an aura of calm and empathy rarely made by his boss. Harris, the former California attorney general, is likely to cross-examine Pence on the early response to the virus, the Trump campaign’s decision to resume holding large rallies and the president’s frequently cavalier attitude toward the disease.

Before Harris became the first Black woman to appear on a major party’s presidential ticket, she had one of her most striking moments in the Democratic presidential primary when she questioned Biden for once opposing the federally mandated busing of students to desegregated schools. As she faces off with Pence, who is white, expect her to address Trump’s comments at the last debate where he demurred when was asked to condemn white supremacy, along with his remark that there were “very fine people” on both sides of a 2017 protest by white supremacists in Charlottesville, Virginia, in which a counter protester was killed.

The GOP’s push to quickly fill a Supreme Court seat once held by the late Ruth Bader Ginsberg could energize voters who see abortion, health care and other major issues on the line. Pence has emphasized his conservative Christian beliefs and anti-abortion stance on the campaign trail and portrayed Democrats as a threat to religious freedom. Harris, a member of the powerful Senate Judiciary Committee set to hold a hearing on Trump’s nominee, has been a staunch defender of abortion rights. A statement this week from two conservative justices raised new criticism of the court’s 2015 ruling legalizing same-sex marriage and suggested the court needs to revisit the decision. The move underlines liberals’ fears and conservatives’ excitement about the potential reshaping of the court. Harris has been a staunch defender of same-sex marriage. Pence, as Indiana governor in 2015, drew national attention for signing a law that allowed business owners to deny service to gay people for religious reasons.

Pence is considered a potential successor to Trump and a likely 2024 presidential candidate. He brings executive experience as Indiana governor and vice president and would instantly be a leading contender if he jumps into the GOP race. Harris has only elevated her profile since joining the Biden ticket and is expected to mount another run for the presidency in the future. That could come as soon as 2024 as Biden hasn’t committed to running for a second term if he wins this year. Look for whether Pence and Harris set the stage for their own political ambitions.

Unlike the last debate, with two men and a male moderator, Wednesday’s debate features Harris, the fourth woman to ever appear on a major party’s presidential ticket, and a female moderator in Susan Page, the Washington bureau chief of USA Today. The Trump-Pence campaign is working to make inroads with female voters and suburban women in particular. Harris has made her own appeal on the campaign trail, telling voters that a Supreme Court challenge to the national health care law could end insurance coverage for birth control and enable insurers to treat pregnancy as a preexisting condition.

Though Pence has not tested positive for COVID-19, his recent exposure to people who have led the Biden-Harris campaign to request a see-through barrier separating the candidate as a precaution against possible transmission. They will also be stationed more than 12 feet apart. Don’t expect them to wear masks or shake hands. Like the previous debate, they’re expected to have a limited in-person audience.

Though the president won’t be on the debate stage, he’s resumed his frequent Twitter habit since returning to the White House on Monday after spending three days in a military hospital for COVID-19 treatment. The president, an avid cable TV news viewer, may chime in via Tweet as the debate unfolds.

The 90-minute debate will be divided into nine 10-minute segments without commercial breaks. It will be aired on major networks and cable news channels including ABC, CBS, CNN, Fox, Fox News Channel, Fox Business Network, PBS, NBC, MSNBC and C-SPAN. Most of the networks will offer a way to watch the debate live online, through their apps and accounts on YouTube and other social media channels.