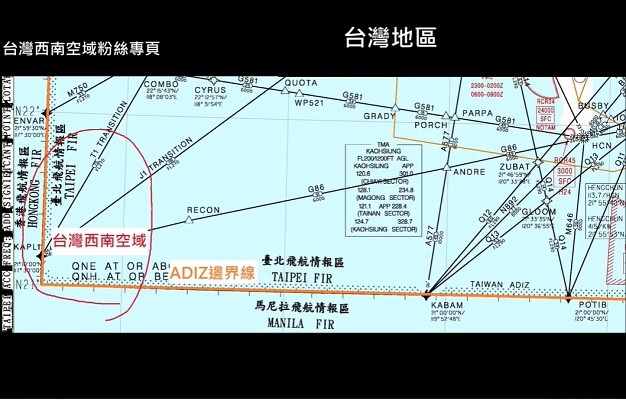 TAIPEI (Taiwan News) — In audio released from an encounter between a Chinese warplane and a Taiwanese Air Force fighter jet on Wednesday (Oct. 7), the People's Liberation Army Air Force (PLAAF) aircraft can be heard admonishing the "Taiwan Area" not to "interfere."

Chinese PLAAF warplanes have been aggressively breaching Taiwan's air defense identification zone (ADIZ) on nearly a daily basis since mid-September. However, on Wednesday morning, while intruding on Taiwan's ADIZ, a PLAAF aircraft broadcasted the first response this year.

On Wednesday morning at 9:31 a.m., the Facebook page of Taiwanese aircraft spotter Southwest Airspace of TW posted audio of an exchange between a PLAAF aircraft and a Taiwanese Air Force fighter jet. According to the aircraft spotter, the encounter occurred at 5:20 a.m. that day as the Chinese warplane hovered at an altitude of 7,000 meters in the southwest corner of Taiwan's ADIZ.

In the recording, a Taiwanese fighter pilot can be heard broadcasting the standard warning "Republic of China Air Force broadcast. Attention communist Chinese aircraft located in the southwest airspace of Taiwan at an altitude of 7000 meters! You have entered our ADIZ, which affects our flight safety, turn around and leave immediately!” Simultaneously, three U.S. Air Force Boeing KC-135 Stratotankers were returning from a mission in the South China Sea and were passing through the Bashi Channel and were returning to Kadena Air Base in Okinawa.

Unlike previous encounters in which the Chinese aircraft would usually stay mute, the PLAAF plane responded with its own radio broadcast: "Taiwan Area, I am the Chinese People's Liberation Army. I am undergoing routine training. Please do not interfere with my normal operations!" In the background, the roar of propellers can be heard indicating that the aircraft was likely a PLAAF Shaanxi Y-8 anti-submarine warfare aircraft, the same type that has been entering Taiwan's ADIZ regularly since mid-September.

The administrator of the Facebook page surnamed Hsu (許) told Taiwan News that the standard reply issued by by PLAAF aircraft had been the more simplistic "I am the Chinese Air Force. I am performing a mission. Do not interfere with my actions!" Hsu believes that the use of "Taiwan Area" indicates that China "obviously regards the southwest airspace as its own and considers the intercept by our Air Force to be interference, we should pay close attention to this trend."

Conversely, he said that the use of the word "training" was to show that it was not a hostile act. In addition, he asserted that the usage of "please" was meant to demonstrate that "Our China is now very civilized!"