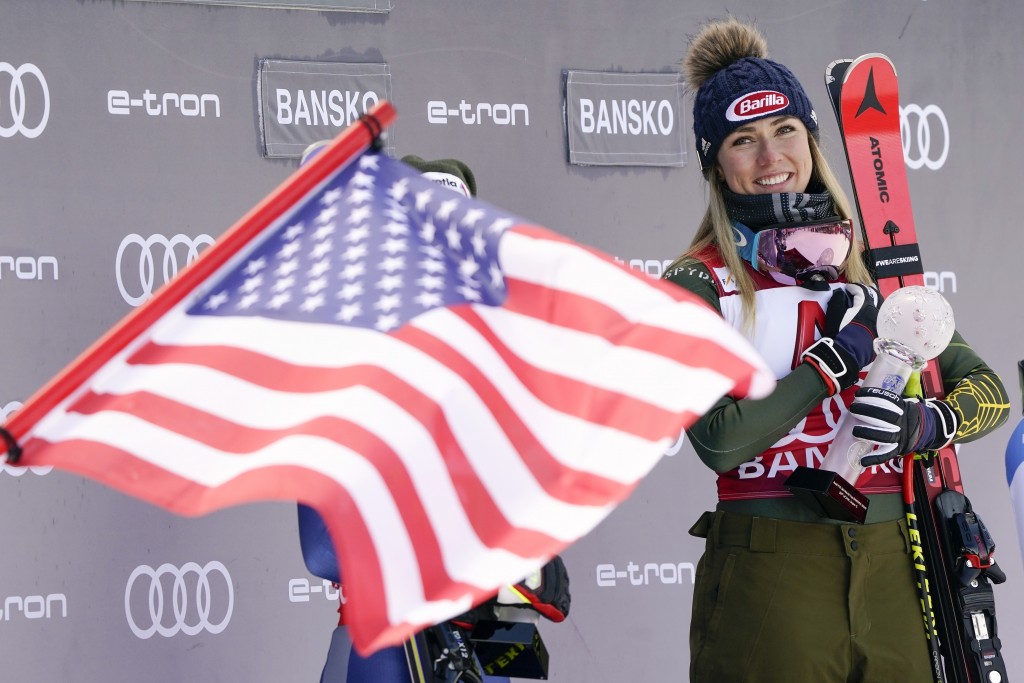 VIENNA (AP) — A year that turned Mikaela Shiffrin’s world upside down has left the American standout wondering how much time she has left in ski racing, with the start of the new season fast approaching.

The double Olympic and three-time overall World Cup champion hasn’t truly considered quitting the sport yet but is questioning how long all the traveling will still be worth it.

Being home, close to family, has become even more important to the 25-year-old since the death of her father, Jeff Shiffrin, in early February.

She has asked herself, “Is it worth it?”

“I have so much passion and I want to do this, and here I am, and I’m doing it, but it also takes me away from the people that I love," she said. "At some point that is going to be too much. My brother is back home, I am not going to see him for a pretty long time, but my mom is traveling with me. If she was not able to come, I would not be here, 100 percent.”

Also, she started thinking about what her dad would have wanted her to do.

“I don’t think my dad would want me to stop for him. But it is also hard to know that because he can’t be here to tell me. Those are the things that I struggle with: How long will it be worth the travel, being away from home, all of those things,” she said. “In a way it was a consideration, but I wasn’t thinking: OK, I am going to quit now.”

When Shiffrin pushes out of the start gate for the World Cup season opener on Oct. 17 in Soelden, Austria, it will have been nearly nine months since her last race — when she picked up her 66th career win at a super-G in Bulgaria.

She was sitting out speed races in Sochi the following week at the time of her father’s accident at the family’s home in Colorado. She and her mother, Eileen, rushed back to the United States.

Having lost her lead in the overall ranking to Federica Brignone and in the slalom standings to Petra Vlhova five weeks later, Shiffrin returned to Europe in mid-March for races in Sweden but was denied a chance to compete as the remainder of the season was canceled amid the COVID-19 outbreak, which prompted them to return to the United States.

Forced to stay at home, the pandemic helped Shiffrin in trying to come to terms with the loss of her father.

She took to social media several times, sharing how she was trying to cope.

“I actually find it easier to talk about that publicly, more than privately. People would expect that I might feel this way, so it’s almost easier to say it then,” Shiffrin said. “Sometimes it’s easier to say something to the public on Instagram, something that maybe would help other people and that’s a little bit motivation to speak about it. When I’m talking privately to basically anybody, it’s a lot more difficult to talk about it.”

In September, the Shiffrin family teamed up with a group of six donors in creating the Jeff Shiffrin Athlete Resiliency Fund, aiming to sustain coaching, training camps, and competition expenses for American athletes in the current, challenging times, with the 2022 Beijing Olympics only 16 months away.

Earlier, Shiffrin had gone back on skis after 16 weeks without training, almost twice as much as the usual nine-week off-season break.

The team got 10 days at Copper Mountain and 14 more at Mount Hood. And after arriving in Europe last week, Shiffrin trained twice with the Austrian team.

“One day I was pretty far behind, one day I was OK,” she said. “It’s like having an injury but you can’t really see it. It takes some time to come back in the right way, to be mentally ready to focus that hard and put in so much effort to be that fast again.”

Off the slopes she is not totally at ease, either, in the Austrian Alps. Walking through the village, memories pop up.

“My dad came to Soelden a couple of times,” she said. “We go into the grocery store and I think about the time he was here and maybe I can feel him, but otherwise it is pretty hard to feel him close here, so that is really uncomfortable.”

It is a feeling, Shiffrin is aware, that will not disappear.

“That is something for my mom and me, we have to get used to the feeling of being uncomfortable, because we can’t stay inside the house forever. It’s part of the process, I guess.”