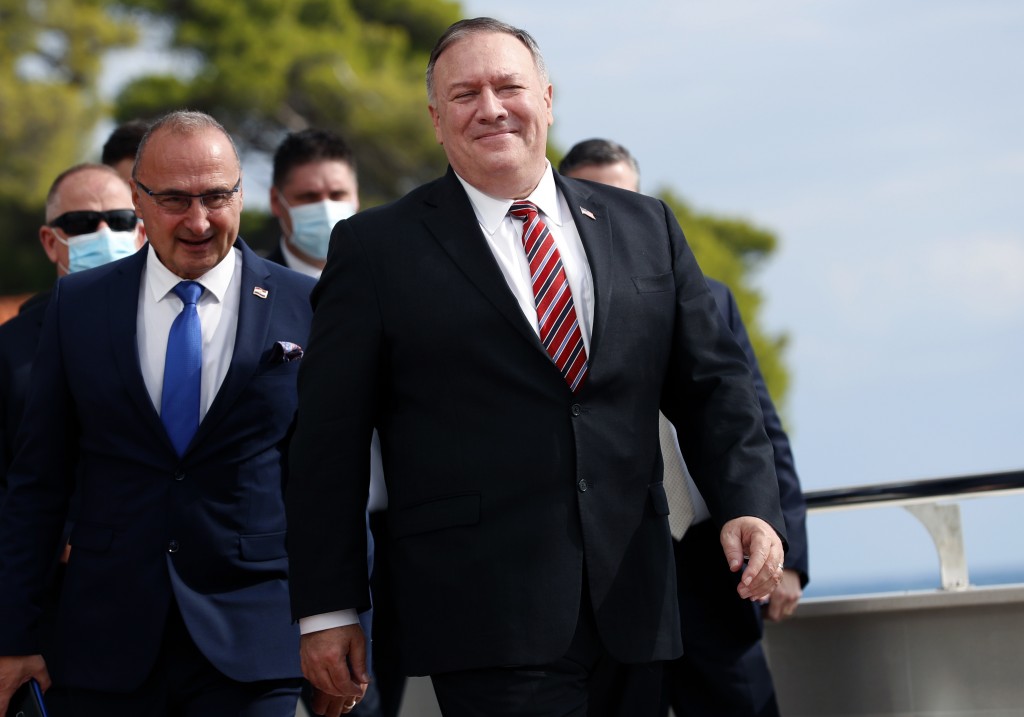 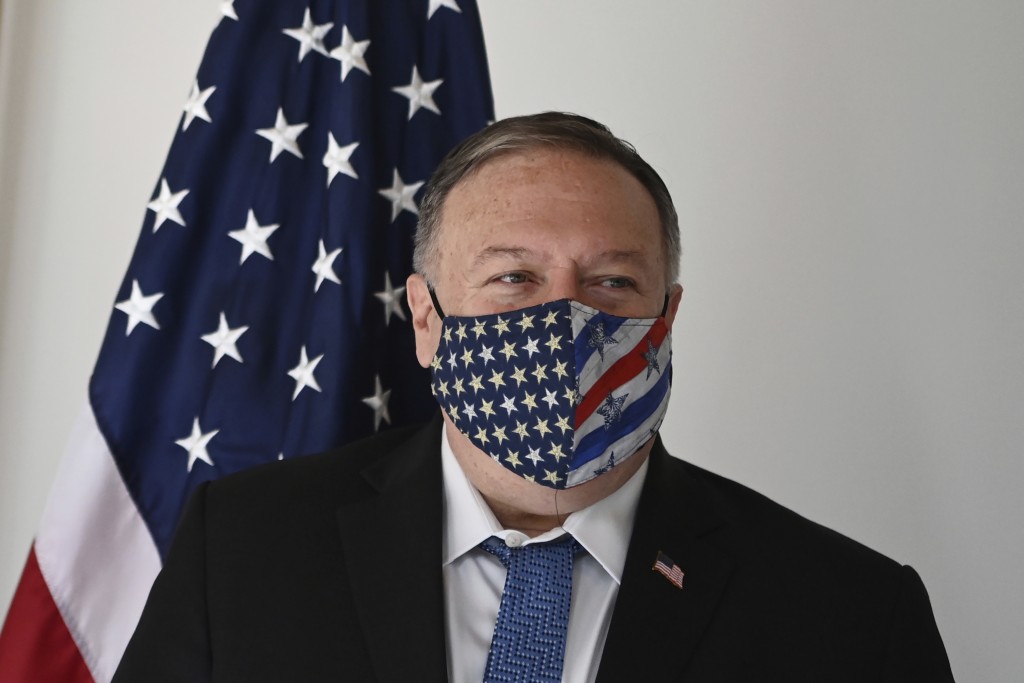 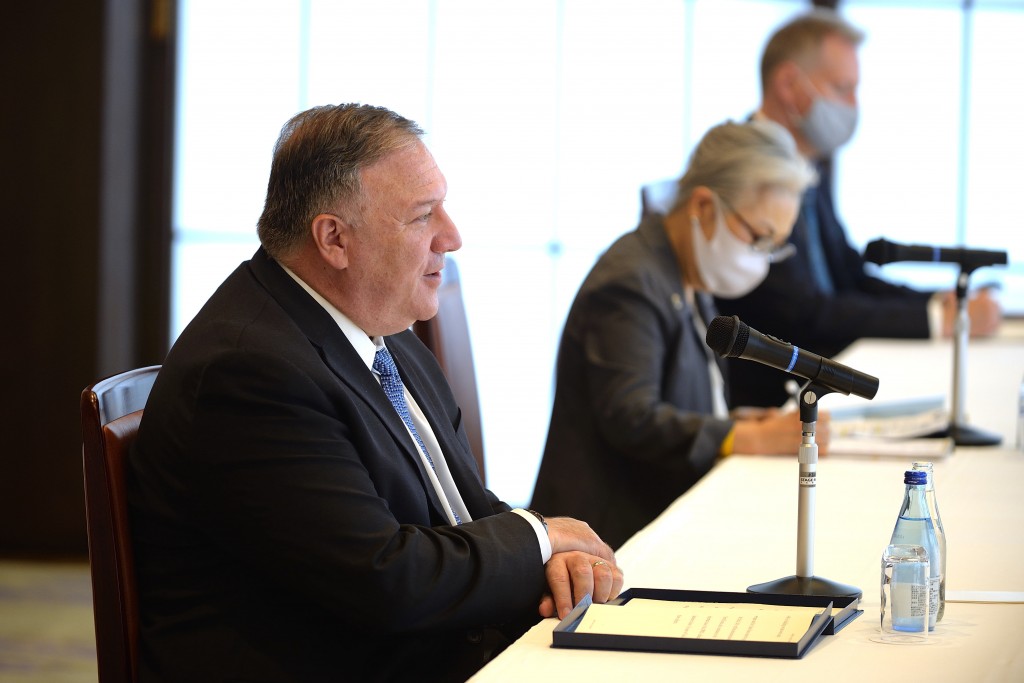 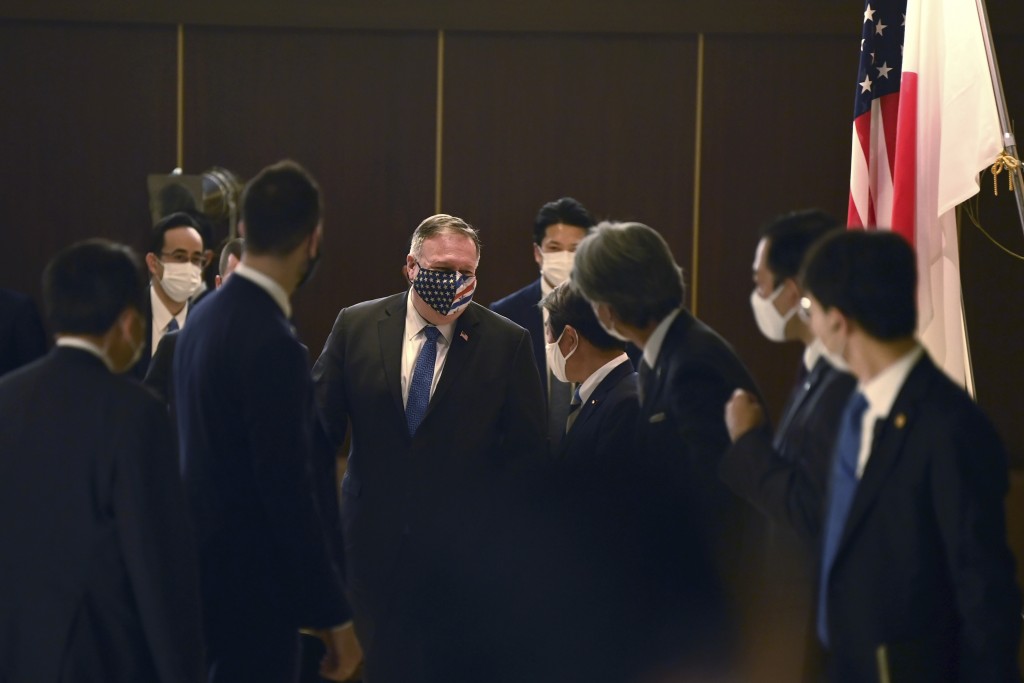 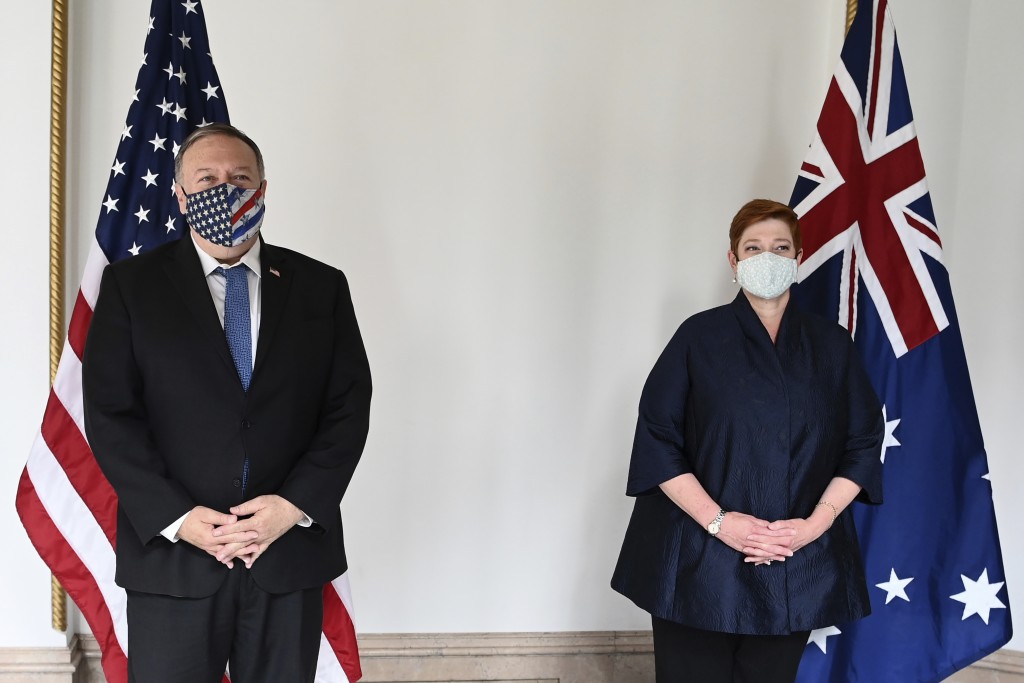 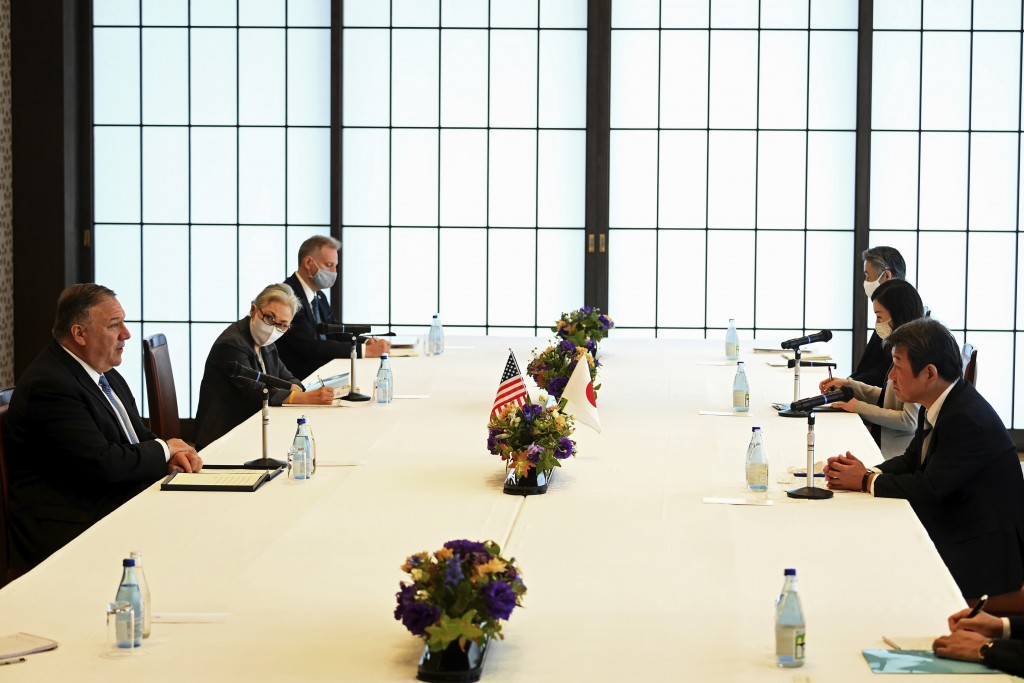 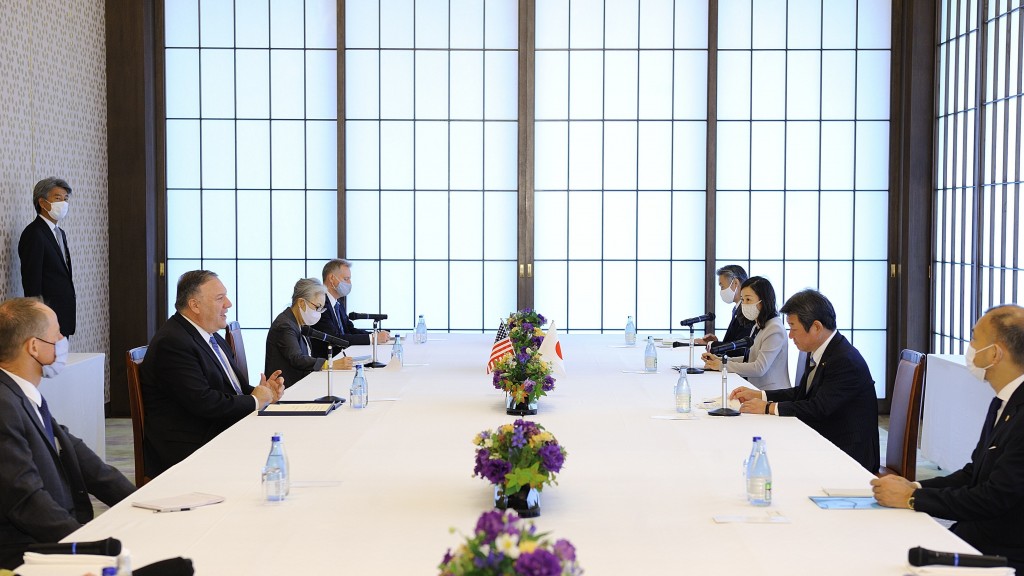 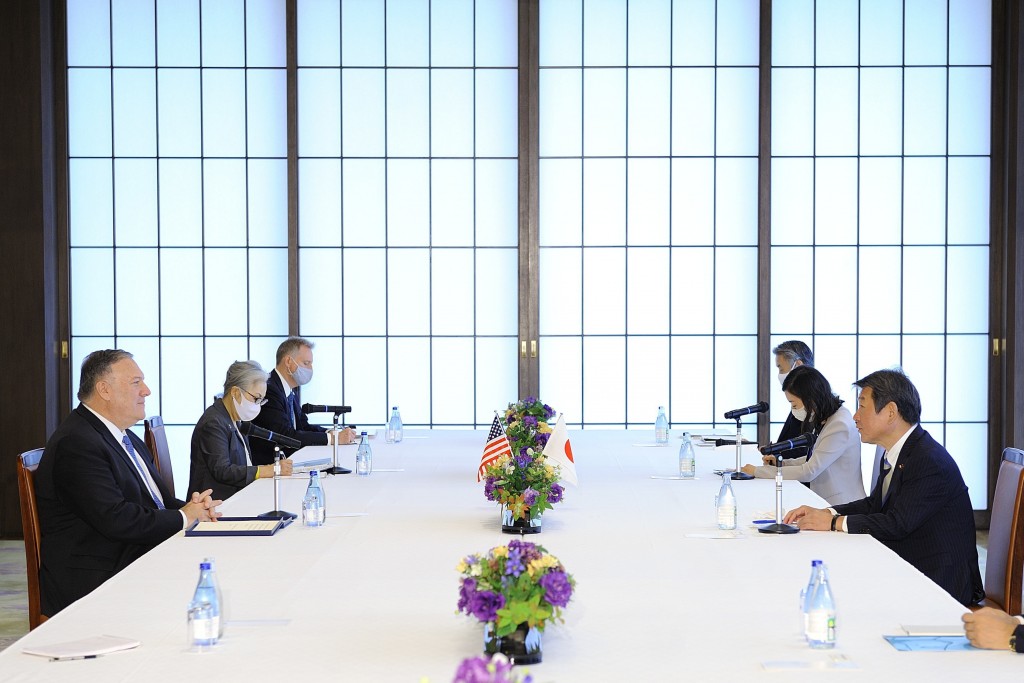 TOKYO (AP) — U.S. Secretary of State Mike Pompeo and his Japanese counterpart, Toshimitsu Motegi, said they will lead a regional initiative called “Free and Open Indo-Pacific" aimed at countering China's growing assertiveness, a main issue they will discuss Tuesday with the top envoys from Australia and India.

Motegi, opening his working lunch with Pompeo ahead of the so-called Quad talks, said “I hope Japan and the U.S. will lead the international society to achieve the Free and Open Indo-Pacific."

He also said the Japan-U.S. alliance continues to be “the cornerstone of peace and stability in the region” under new Prime Minister Yoshihide Suga who took office on Sept. 16, vowing to carry on his predecessor Shinzo Abe's hawkish security and diplomatic stance.

Pompeo welcomed Suga's recent description of the Free and Open Indo-Pacific as the foundation of regional peace and stability and that “I could not agree him more.”

On his way to Tokyo, Pompeo told reporters that the four countries hope to have some “significant achievements” at the meeting, but did not elaborate.

Japanese officials say they will discuss the impact of the coronavirus pandemic, as well as the Free and Open Indo-Pacific (FOIP) initiative for greater security and economic cooperation that Japan and the U.S. have been pushing to bring together “like-minded” countries that share concerns about China’s growing assertiveness and influence.

The talks come weeks ahead of the U.S. presidential election and amid tensions between the U.S. and China over the virus, trade, technology, Hong Kong, Taiwan and human rights. Pompeo is attending the Quad meeting, though he canceled subsequent planned visits to South Korea and Mongolia after President Donald Trump was hospitalized with COVID-19. The president was released Monday and returned to the White House.

The talks follow a recent flareup in tensions between China and India over their disputed Himalayan border. Relations between Australia and China have also deteriorated in recent months.

Japan, meanwhile, is concerned about China’s claim to the Japanese-controlled Senkaku Islands, called Diaoyu in China, in the East China Sea. Japan also considers China’s growing military activity to be a security threat. Japan’s annual defense policy paper in July accused China of unilaterally changing the status quo in the South China Sea, where it has built and militarized manmade islands and is assertively pressing its claim to virtually all of the sea’s key fisheries and waterways.

Suga, who had been chief Cabinet secretary under Abe, will make his in-person diplomatic debut as prime minister when he meets the Quad ministers. He will also hold separate talks with Pompeo on deepening the Japan-U.S. alliance and the FOIP.

“The world is possibly becoming even more unpredictable and uncontrollable due to heightening selfish nationalism and growing tension between the U.S. and China,” Suga told Japanese media on Monday. He said he will pursue diplomacy that is based on the Japan-U.S. alliance as a cornerstone and “strategically promote the FOIP,” while establishing stable relations with neighbors including China and Russia.

He said he also plans to promote the FOIP during a planned visit to Southeast Asia later this month.

Japan sees the FOIP as crucial to have access to sea lanes all the way to Middle East, a key source of oil for the resource-poor island nation.

Suga has little experience in diplomacy. Balancing between the U.S., Japan’s main security ally, and China, its top trading partner, will be tough, analysts say.

Japan hopes to regularize the Quad foreign ministers’ talks and broaden their cooperation with other countries. But each Quad member has its own political stance toward China and it would be difficult to agree on concrete steps even though they share perception of China as a common threat, analysts say.