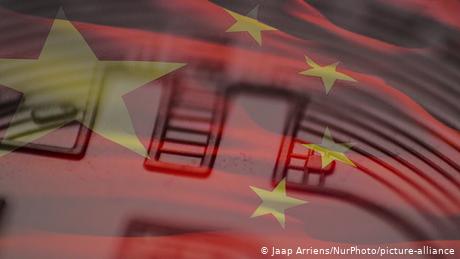 Imagine going to the bank to take out cash, except without going to the bank and without the cash. If the Chinese central bank's plan for a digital yuan succeeds, the future could look something like that for everyone.

Since early this year, China has gradually ratcheted up testing of its first central bank-backed digital currency, known there as DCEP, or "digital currency electronic payment."

While other countries have made similar attempts to launch a digital sovereign currency, moves by the world's second-largest economy hold a higher level of significance.

"In the future, everyone will be using DCEP," Chinese bitcoin pioneer and millionaire Chandler Guo told the BBC in August.

While rumors have swirled that DCEP could be rolled out to the public as early as this year, the People's Bank of China (PBOC) aims to have the currency in use in time for the next Winter Olympics, planned for February 2022 in Beijing.

If the project succeeds, a digital yuan could eliminate the need for both physical cash and online payment services like PayPal, and be another way for China to challenge the US for global dominance.

DCEP is a digital currency backed by the yuan. Unlike bitcoin and other cryptocurrencies, whose values can vary wildly based on speculation — making them, in the eyes of most governments, unsuitable for widespread use — DCEP will be as stable as the physical yuan.

Like cash, each digital yuan is created, signed and issued by PBOC, China's central bank. Unlike cash, however, the bank retains the ability to track the movement of every piece of digital currency it issues.

Commercial banks distribute DCEP to their customers, who can download the currency from their bank accounts into digital wallets or apps, akin to taking cash out at an ATM.

With a digital wallet flush with DCEPs, consumers can make contactless, instant payments to anyone else who uses the service, whether at the grocery store or paying back a friend. This could theoretically eliminate the need for third-party digital payment services like WeChat or Alipay, currently very widely used in China.

Taking on the US dollar's dominance

The well-established Chinese habit of paying with a mobile phone should make the transition to a digital yuan an easy sell for consumers there while offering big benefits to the Communist regime.

Issuing a digital sovereign currency could be one way for the government to regain control of domestic financial transactions, says Konrad Adenauer Stiftung Senior Project Manager Alexander Badenheim, speaking with DW from Beijing about a foundation report on digital currency developments in China.

Doing so might also give China an edge over other countries in this domain, potentially becoming a technological pathbreaker in the transition to a digital currency as more and more adopt similar technology.

China may "hope to create its own international payment architecture, something comparable to SWIFT," Badenheim said, referring to the code that helps financial institutions process transactions, "but which would be more centered on digital currencies and dominated not by the US dollar, but by the Chinese digital yuan."

"I think that's especially important in current times where we talk about the decoupling between the US and China," he added.

Currently over 60% of known central bank foreign exchange reserves are in US dollars, according to the International Monetary Fund, making it the de facto global currency. Rather than attempt to settle transactions in different currencies, countries and companies use the dollar to streamline international payments. For comparison, the No. 2 global currency is the euro, which accounts for 20% of international reserves.

A widespread uptake of a digital yuan could lead to central banks similarly holding reserves of DCEP. As the sole issuer of DCEP, this would give the Chinese central bank greater influence over global financial markets.

Read more: Opinion: China is looking to challenge the US

By becoming the first world power to dominate the digital sphere, China could potentially carve out a stronger position for itself in the global economy and make it less vulnerable to sanctions from Washington, another step in Beijing challenging the US for global dominance.

That's part of the idea. However, whether other countries will be so eager to use a Chinese-issued digital currency is another story.

The potential to track payments could deter other countries and international players from jumping on board, Badenheim says.

The Chinese state could theoretically abuse its digital yuan to track transactions of its own citizens, but also any companies or countries that would use the digital yuan.

"Let's say China buys products from a country and they are paid in the Chinese digital yuan," Badenheim said. "And this country then goes to another country and buys something over there with the Chinese yuan. It basically could be possible for the Chinese central bank to really have an overview of where those countries spend their money and what they purchase. That's just a possible scenario, but it's not unlikely."

This information could then be integrated into the social credit system currently being rolled out in China, he adds.

"The question is whether other actors are willing to accept the risk that China could potentially track their financial transactions," he said. "I wouldn't say it's a given fact that China will do it, but it's a possibility of course."

For this reason, China's frontrunner status might not be enough to guarantee its success in the race to becoming a global digital currency leader.

The European Central Bank on October 2 said it planned to prepare for the launch of a digital euro in the European Union, where data protection has long been top of mind in policy making.

And of course there is Libra from Facebook. With Libra, the social media platform has sought to offer a privately run, global currency to its over 2.7 billion users, much to the dismay of financial regulators around the globe.

Who the victor will be in the race to the digital currency frontier remains to be seen. And for the time being, even in China, physical cash will remain in circulation.

But what is clear is that how we pay in the future, and in what digital currency, is liable to have a big impact on everything from the international economic pecking order down to who knows how much you really spend on takeout.