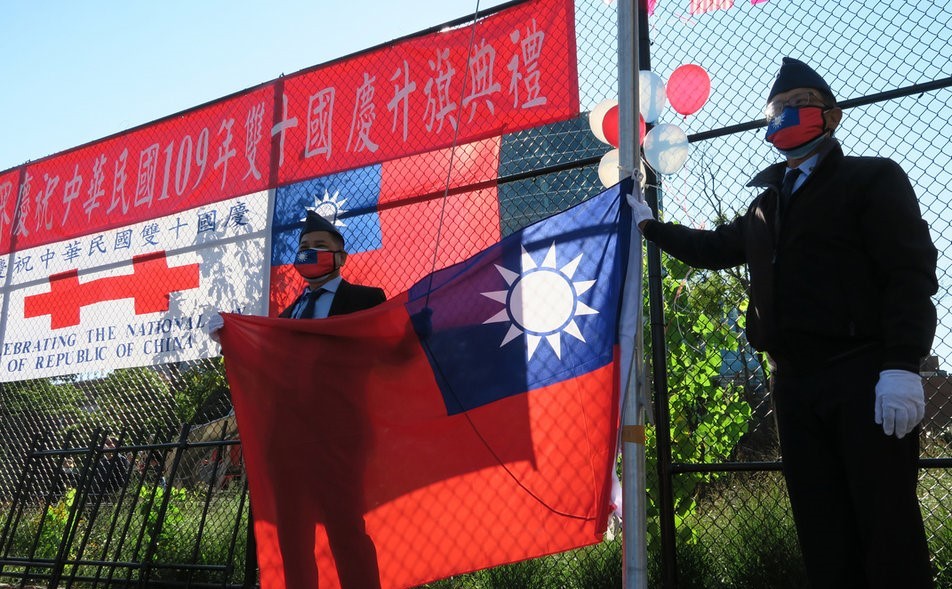 Although the number of participants was limited, people were still enthusiastic, with lots of slogan chanting. The ceremony was held near the P.S. 20Q John Browne Elementary School in Flushing, Queens, New York.

In order to prevent the spread of coronavirus, participants wore masks throughout the event and maintained social distancing.

Li Kuang-chang (李光章), head of the New York Taipei Economic and Cultural Representative Office, oversaw the celebratory event for the first time since taking office in July. He said that with the combined efforts of the government and the people Taiwan has successfully fought the pandemic at home while actively helping more than 80 countries around the world.

He added that the international affirmation of Taiwan's free and democratic system, as well as global support for Taiwan's international participation, are things he has not seen in his 30 years of being a diplomat. Li said that the relationship between Taiwan and the U.S. has reached an all-time high for the last 40 years.

This is the result of the joint effort of all Taiwanese compatriots at home and abroad, Li noted, and it proves that Taiwan "is not alone in its virtue; there are neighbors."

Yu Chin-shan (于金山), the chairman of the New York Chinese Consolidated Benevolent Community Center, said that the “Chinese in New York will stand with the Republic of China” and fully support the nation against foreign countries or aggressive regimes.

Overseas Community Affairs Council (OCAC) Chairman Tung Chen-yuan (童振源) said in a pre-recorded video that overseas Taiwanese are pearls scattered around the world and an extension of the nation’s power. Although the pandemic is still severe, overseas delegations have been able to overcome obstacles and plan to hold about 160 in-person and online activities to celebrate Double Ten Day and gather global support for the nation, Tung stated.