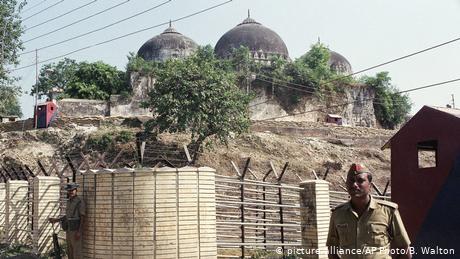 A special court in the northern Indian city of Lucknow on Wednesday acquitted all 32 people who had been accused of crimes in the 1992 demolition of the Babri mosque in the city of Ayodhya.

Four senior leaders of India's ruling Hindu nationalist Bharatiya Janata Party (BJP) had been among the defendants at the trial that languished for almost 28 years.

Seventeen of the 49 accused died of natural causes during the proceedings.

The judge said there was no way to verify that the audio and video evidence provided by India's Central Bureau of Investigation (CBI) were authentic, NDTV news channel reported.

The Babri mosque dispute remains as polarizing and politically divisive as it was in 1992 when the 16th century structure was demolished by Hindu activists in the northern state of Uttar Pradesh.

Hindu fundamentalists, as well as some historians, claim the mosque was built on the site of a temple for the Hindu deity Ram on the orders of Moghul emperor Babur.

The mosque's demolition in December 1992 by Hindu extremists led to riots across India, killing about 2,000 people.

In November 2019, India's Supreme Court allowed the construction of a temple on the site. In February this year, Prime Minister Narendra Modi announced that the government had finalized an authority to build the temple.

The temple was one of the BJP's election promises and Modi laid its foundation stone in August.