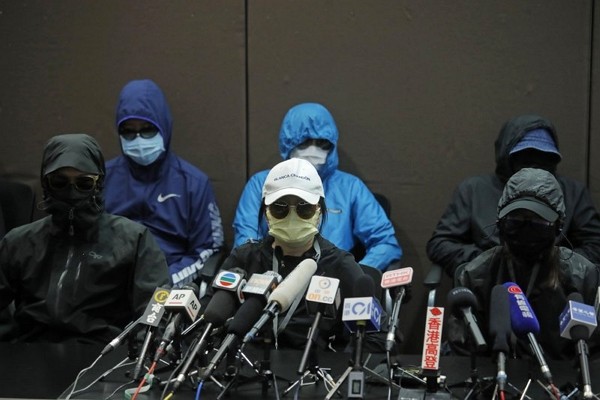 The relatives of 12 Hong Kong people arrested by China at sea last month called for access to their detained family members in a petition to the mainland's representative office in the semi-autonomous city on Wednesday (Sept. 30).

The 12, of whom 10 were facing charges related to anti-government protests last year, were arrested on Aug. 23 for suspected illegal entry into mainland Chinese waters as they attempted to flee by boat to self-ruled Taiwan.

They are being held in Shenzen, where their families say they have been denied access to independent lawyers.

The arrest of the 12, whom China’s foreign ministry has called “separatists”, has compounded the fears of many in Hong Kong about what they see as China’s determination to end any push for greater democracy in the financial hub.

The father of detainee Cheng Tsz-ho broke into tears: “I just want to see if my son is ok.”

Hong Kong authorities have said the 12 will be represented by mainland lawyers chosen by the detainees from a list provided by Chinese authorities, and that they have offered “needed and feasible” assistance to the families and will continue to do so.

In a statement on Tuesday, the liaison office said the facts related to their crimes were clear and that people with “ulterior motives” were “spreading rumours” about the 12 to instigate illegal demonstrations.

“Our family members are disappeared. We couldn’t see them or give them medicine. We want our own lawyers, not government-appointed lawyers,” said the mother of detainee Li Tsz-yin.

In a jointly-issued statement, read by activist Owen Chow, the relatives said the lawyers they had chosen were denied access and pressured by Chinese authorities to drop the case. The families said the Hong Kong government had not provided any “concrete assistance” and requested meetings with senior officials.

The family members left mooncakes, a traditional gift for the approaching mid-Autumn festival, near the tall barricades surrounding the Liaison Office.

“I hope we can reunite for next year’s festival,” the wife of Wong Wai-yin, another detainee, said.

“I just want to see my husband. We are not here to make a mess. Why has Hong Kong become like this?”