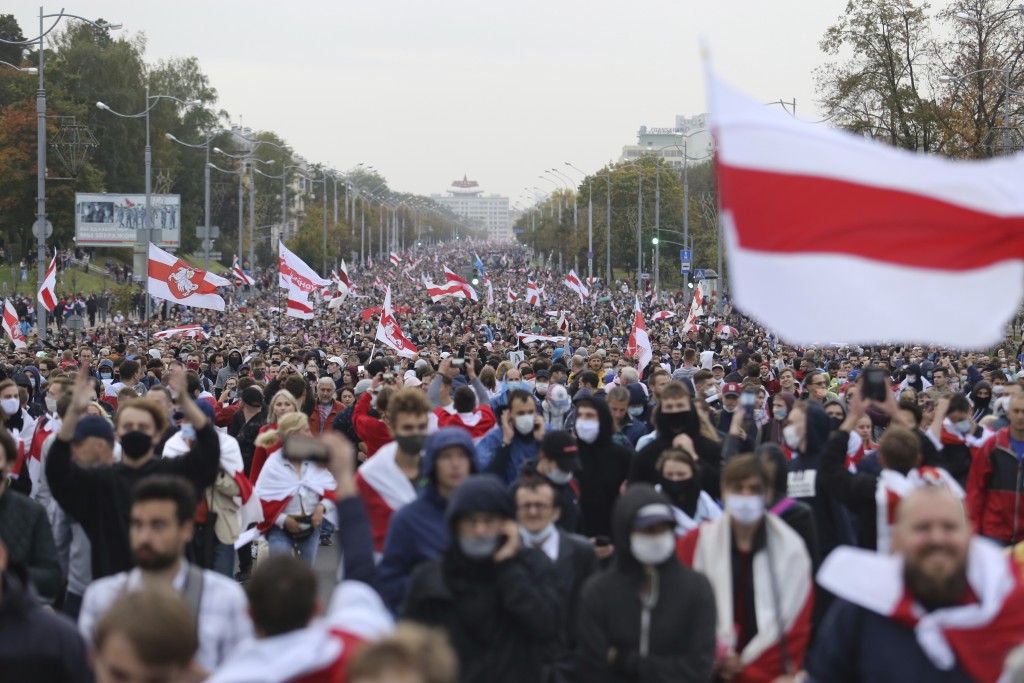 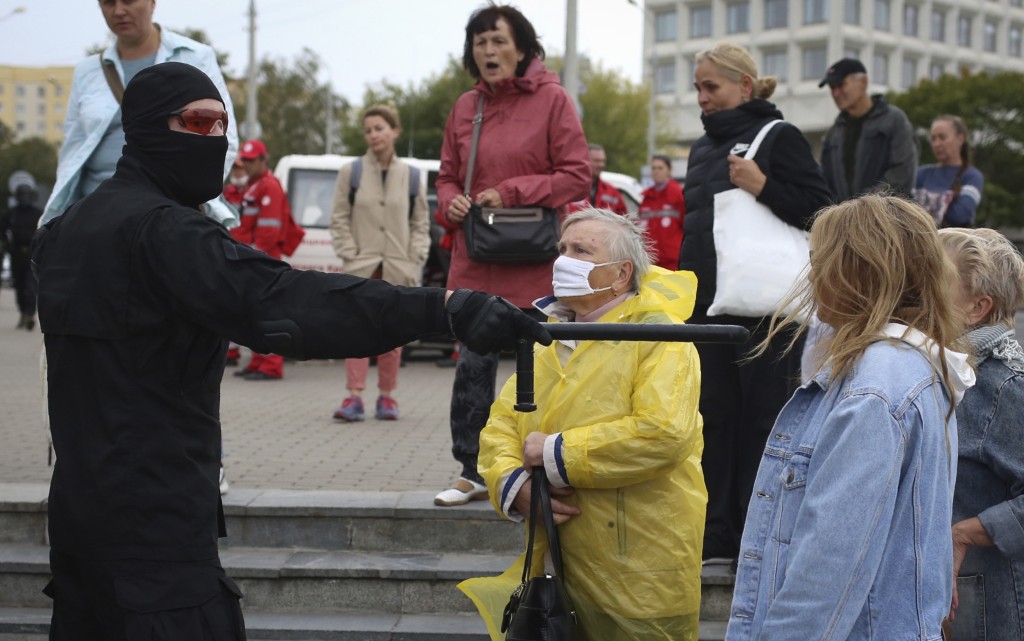 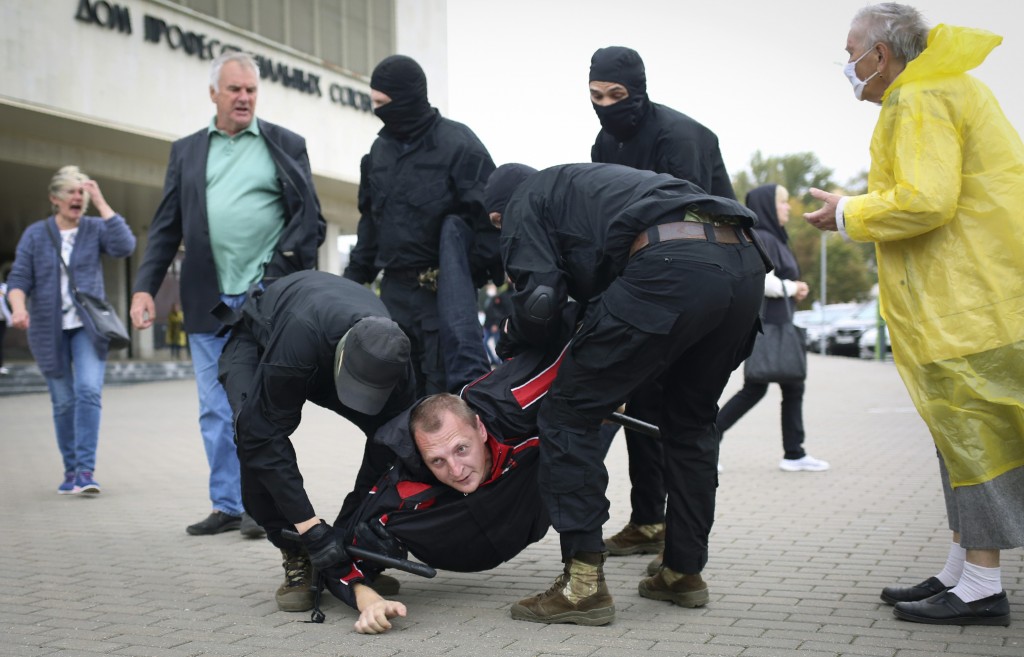 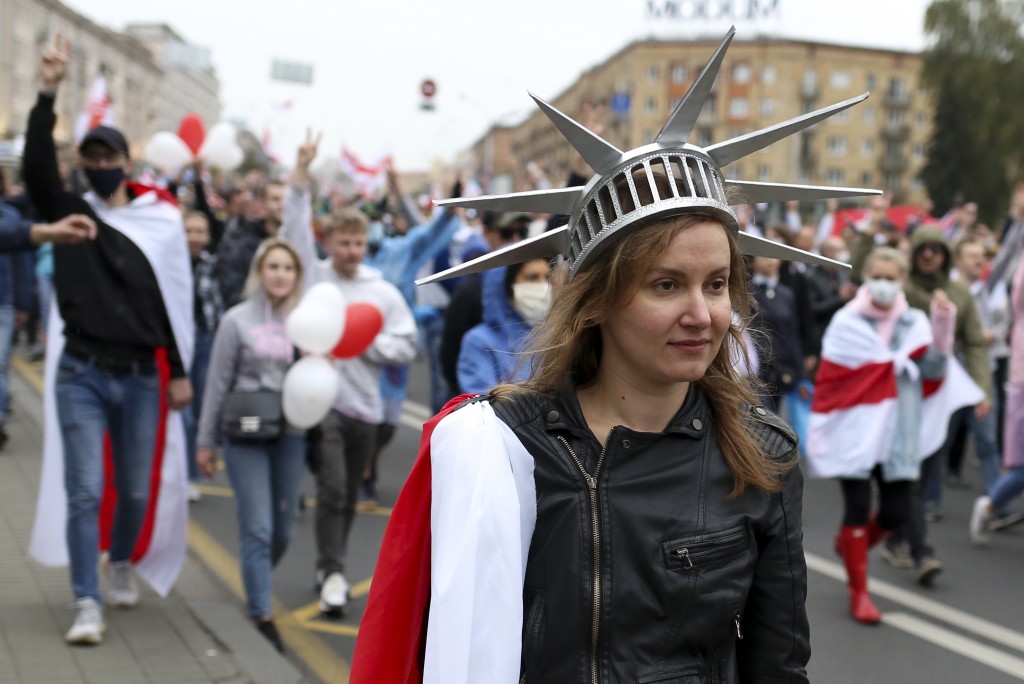 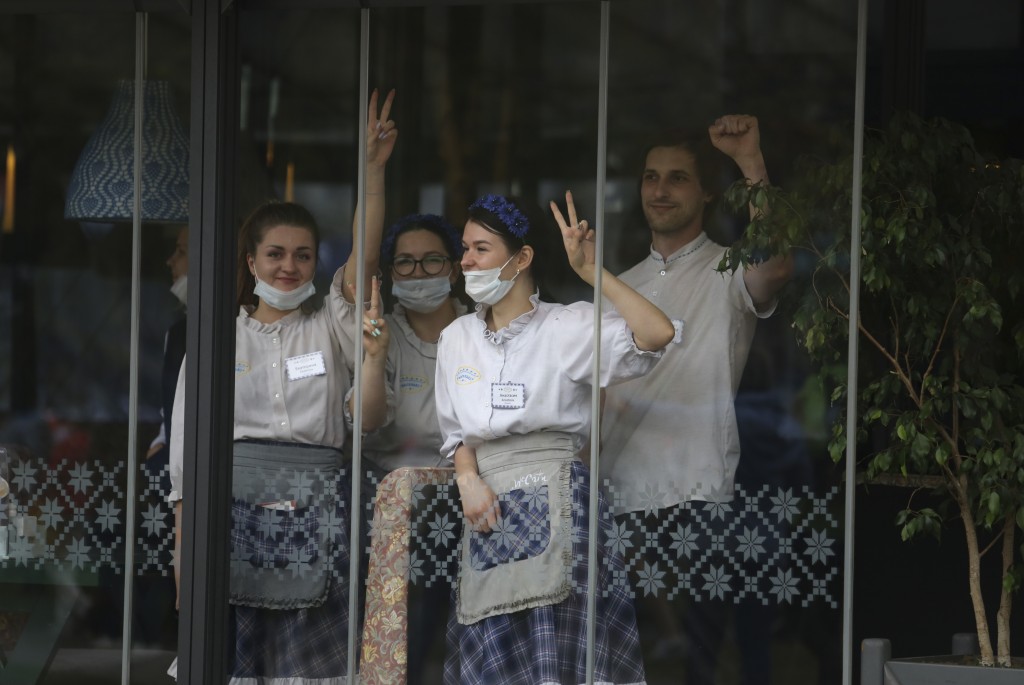 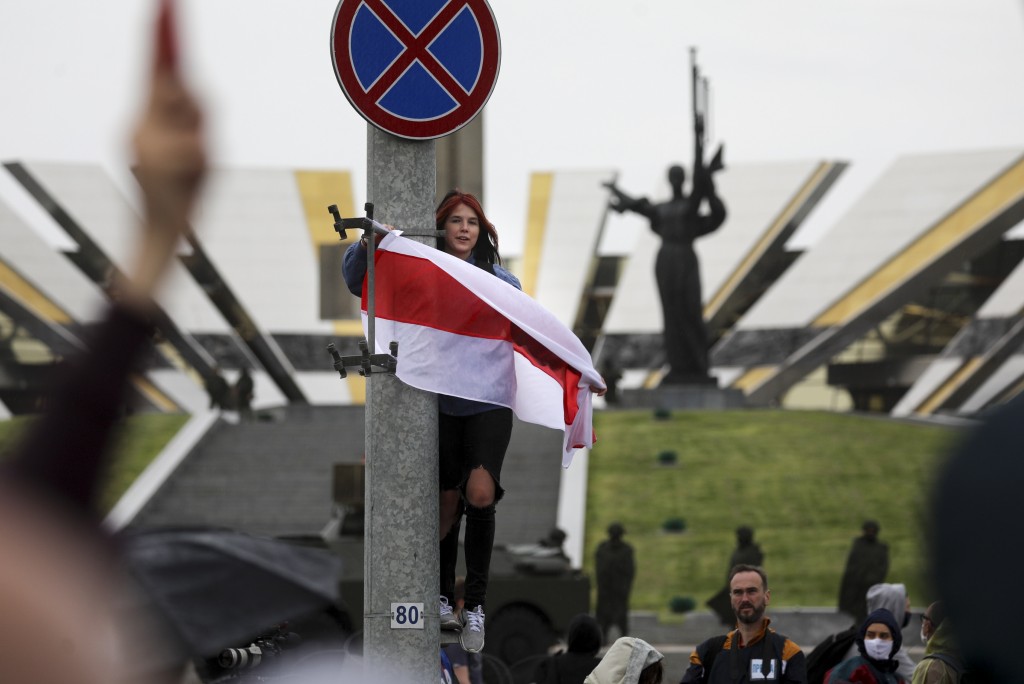 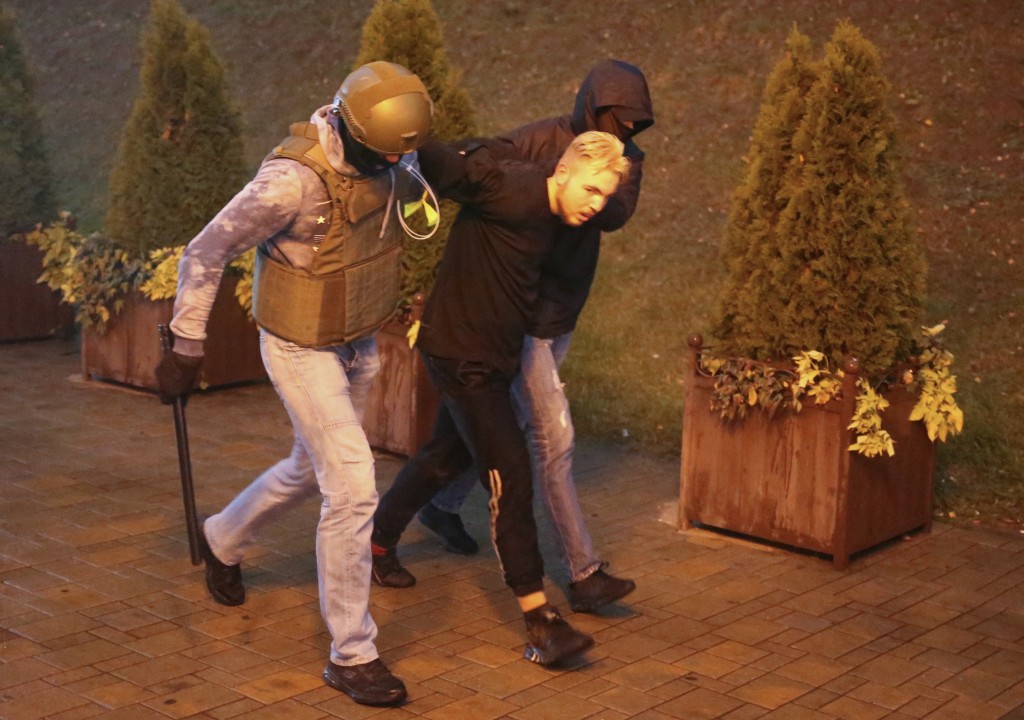 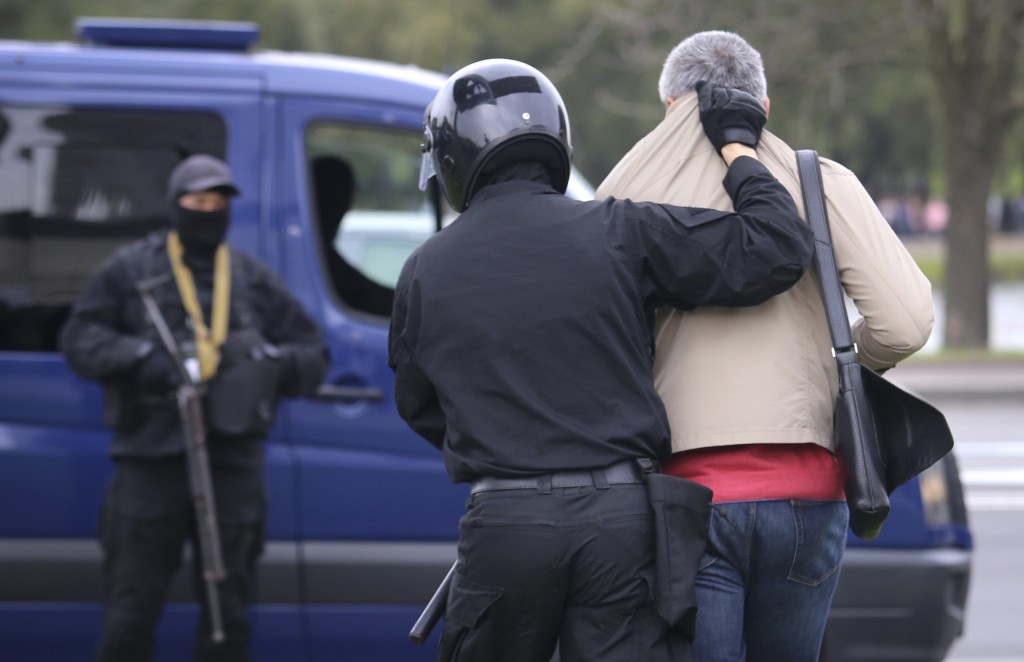 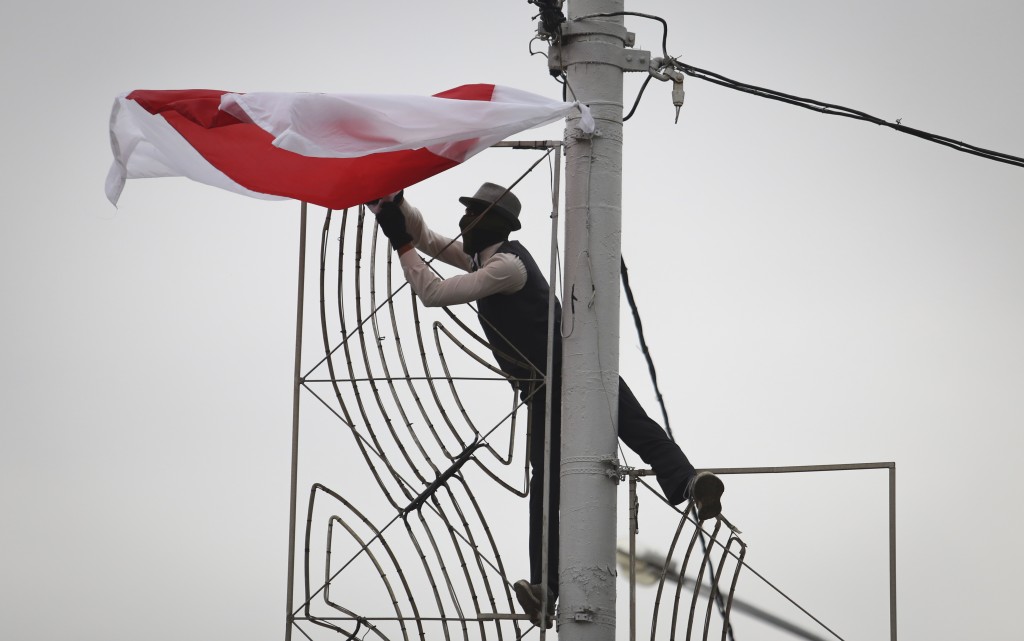 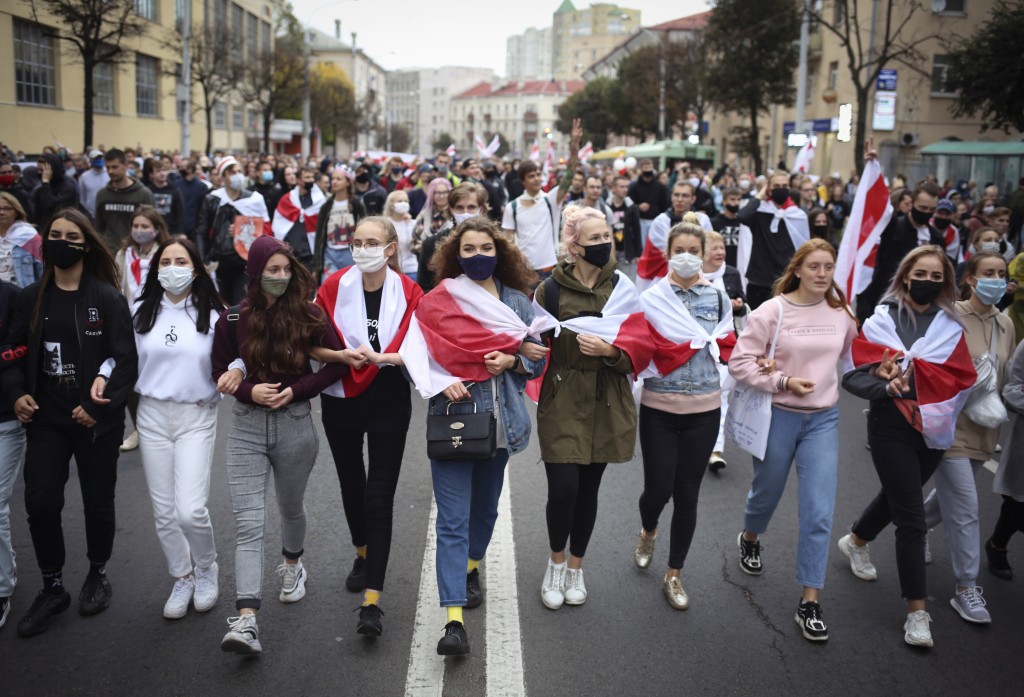 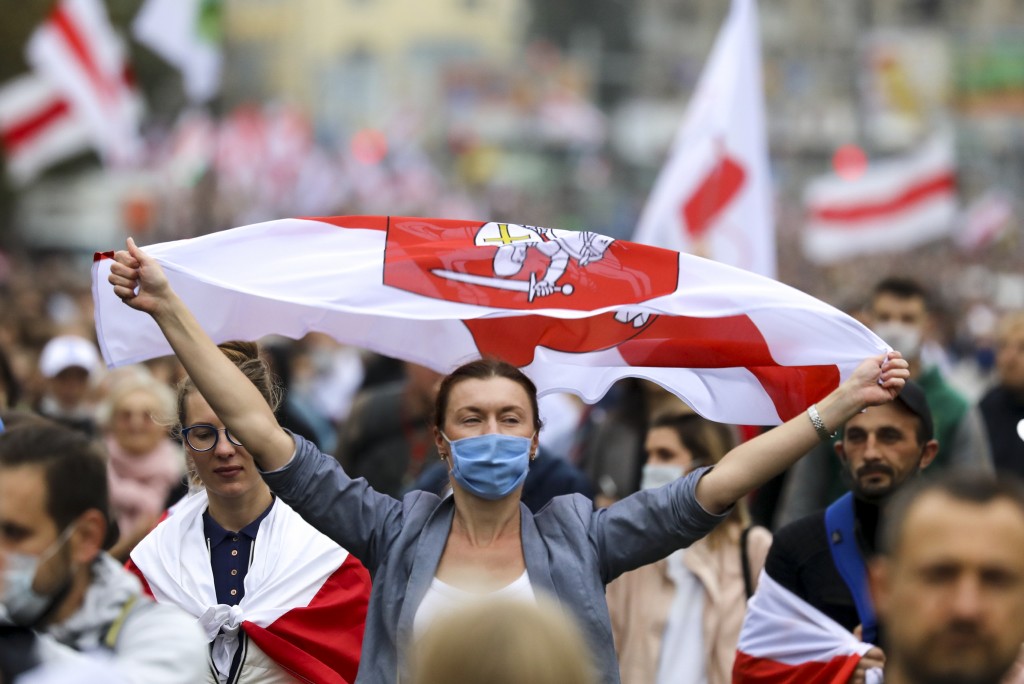 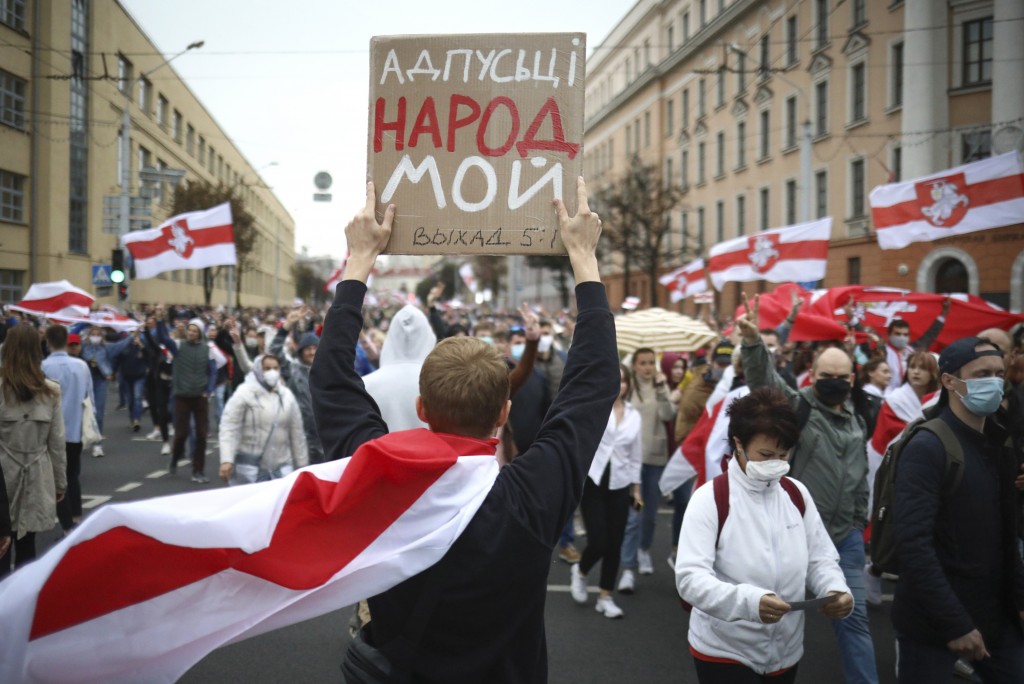 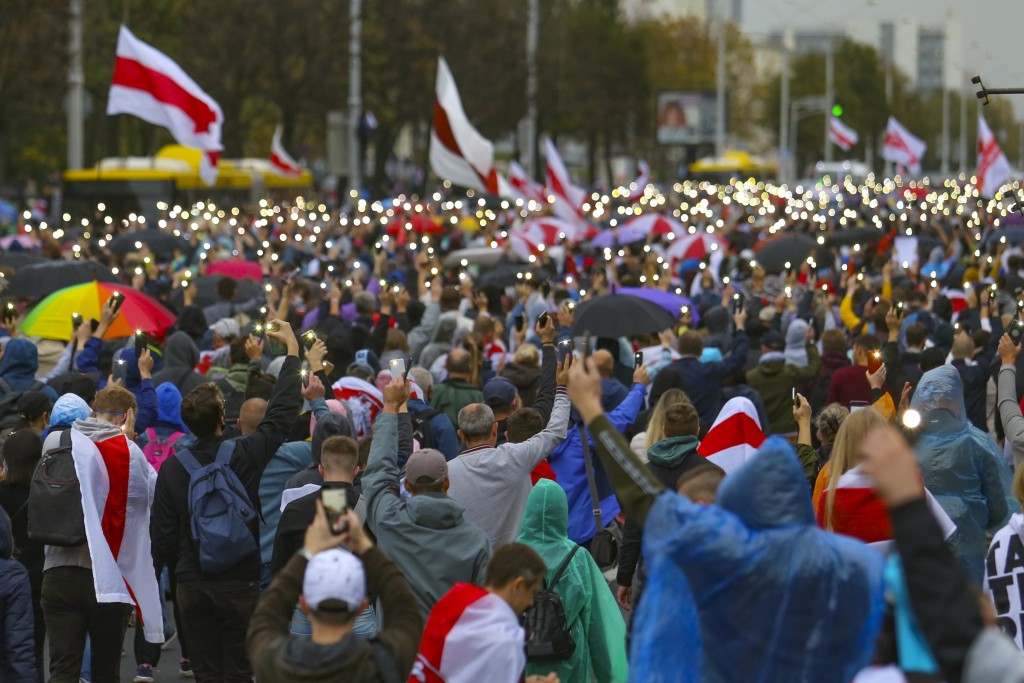 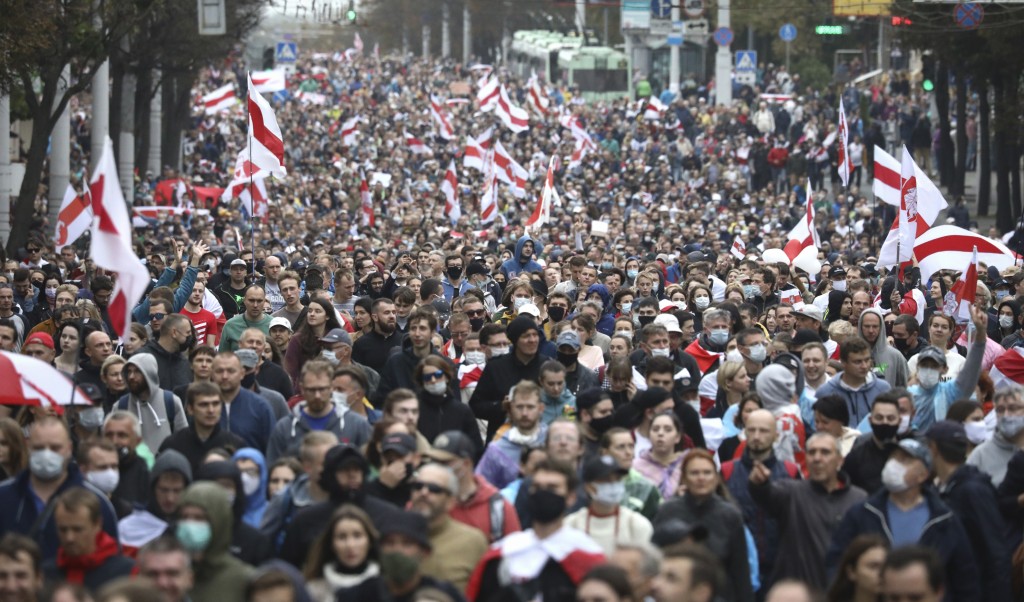 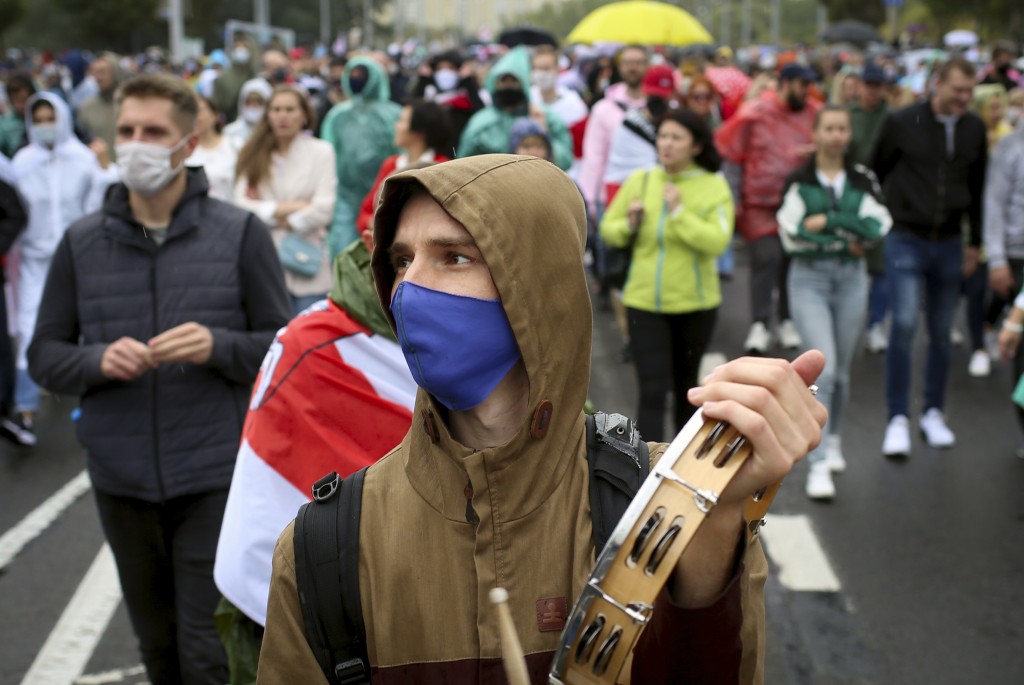 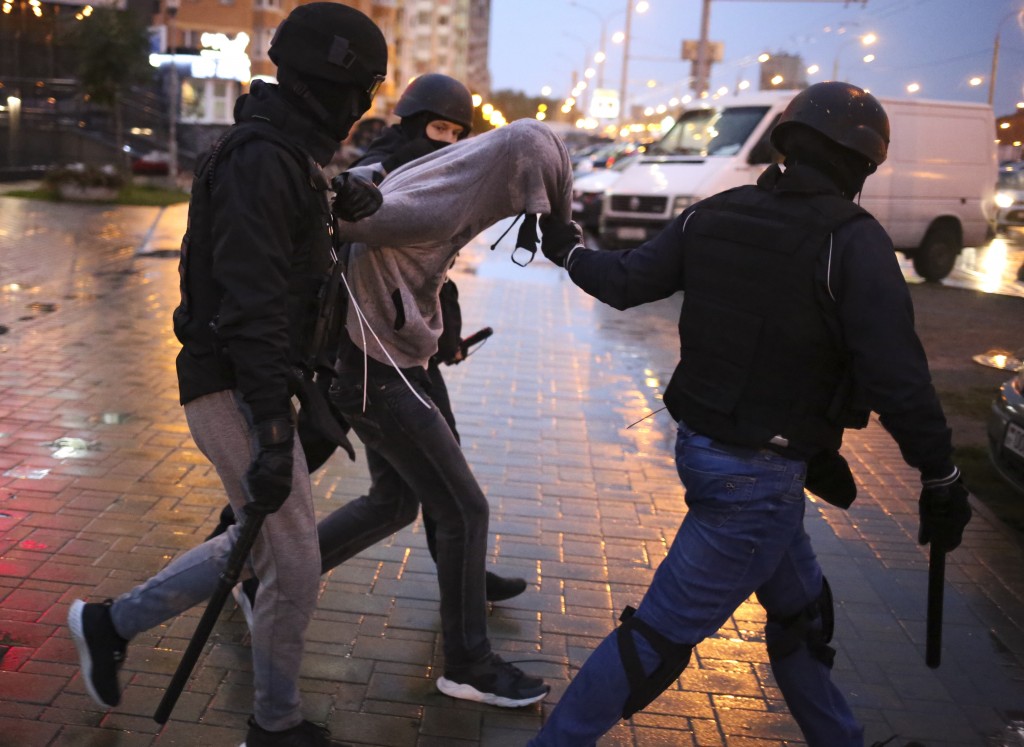 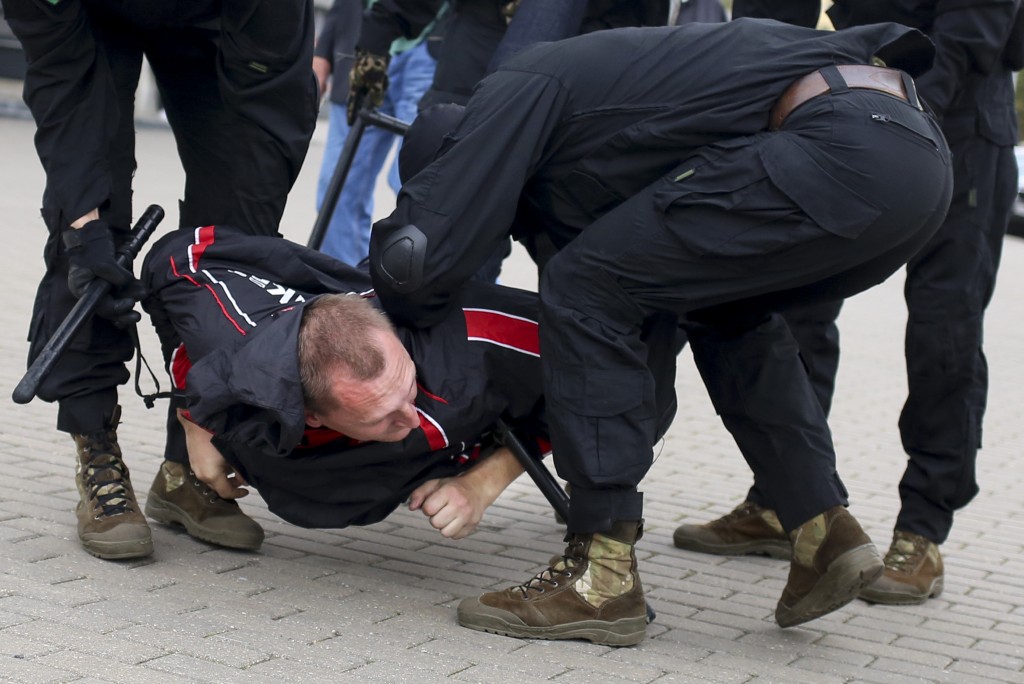 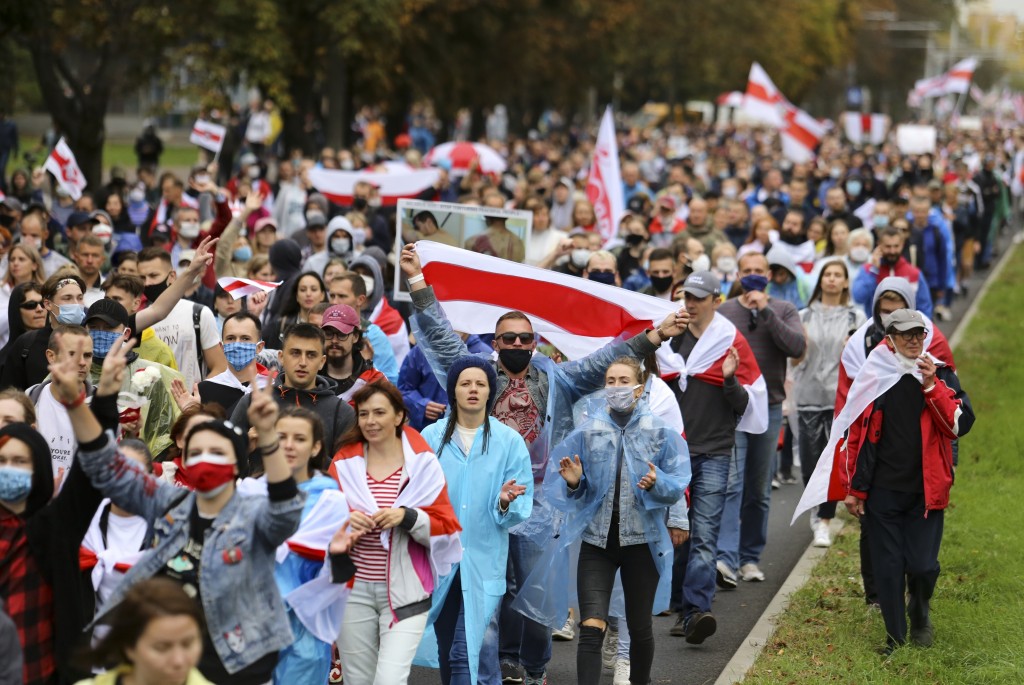 KYIV, Ukraine (AP) — Authorities in Belarus have detained about 500 people during weekend protests against the country's authoritarian president, who has claimed a sixth term in office in an election widely seen as rigged.

Belarus' Interior Ministry said Monday that 150 protesters were detained on Saturday and over 350 more on Sunday, when anti-government protests spanned 22 cities in the biggest challenge yet to President Alexander Lukashenko's long reign.

About 100,000 demonstrators marched in the Belarusian capital of Minsk on Sunday, demanding the resignation of Lukashenko, who has cracked down hard on opposition and independent news media during 26 years in power.

According to the Viasna human rights group, the clampdown on the protesters this weekend wasn't as violent as before.

Hundreds of thousands of Belarusians have been protesting daily since the Aug. 9 presidential election, which officials claim handed Lukashenko, a 66-year-old former state farm director, a victory with 80% of the vote.

Both opposition members and some poll workers say the vote was rigged, and the United States and the European Union have condemned the election as neither free nor fair. Many European countries have refused to recognize Lukashenko as the legitimate leader after his unexpected inauguration earlier this week.

During the first days after the election, police used tear gas, truncheons and rubber bullets to disperse crowds. Some protesters died, many were injured and nearly 7,000 were detained. Amid international outrage over the violent suppression of the protests, Belarusian authorities switched to prosecuting top activists.

Belarusian authorities have opened a criminal probe into members of the Coordination Council, created by the opposition to push for a peaceful transition of power, on the charges of undermining national security. Many members have been arrested or forced to leave the country.

On Monday, Svetlana Alexievich, the winner of the 2015 Nobel Prize in literature and the only member of the council’s executive presidium still free in Belarus, left for Germany. The council told The Associated Press that Alexievich will spend a month in Germany and receive medical treatment, then she plans to travel to Italy and come back to Belarus.

The council also reported Monday that the health of Maxim Znak, another top council member who was jailed earlier this month and has been on hunger strike since Sept. 18, took a sharp turn for the worse.

It urged authorities to release Znak and make “quality medical treatment” available to him and urged Znak himself to stop the strike.