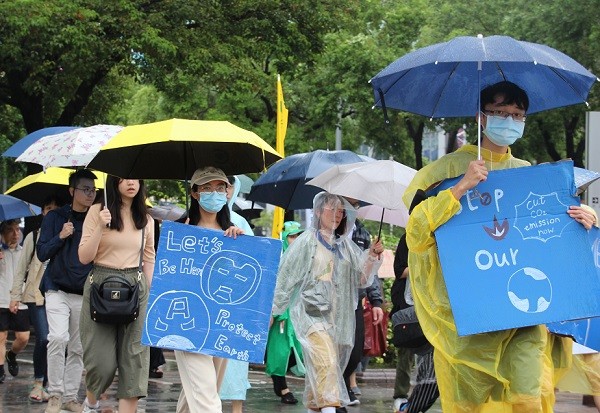 The demonstration, which had an "under the sea" theme, was hosted by the Taiwan Youth Climate Coalition (TWYCC) and participated in by a large assortment of clubs and NGOs, ranging from the National Taiwan University Sustainable City Club to the Hsinchu Wild Bird Society. At the pre-parade rally, representatives of several groups gave "soapbox" speeches starting at 2 p.m. as participants coalesced by Zhongshan South Road in front of the Legislative Yuan.

By around 3 p.m., the gathering had swelled to several hundred strong, and the demonstrators set off on a march that took them on a southwesterly route to the steps of the Environmental Protection Administration.

The marchers took to the streets with a clear set of aims: six demands and 165 proposed actions for the Taiwanese government to take, according to the TWYCC.

The organizers called on the government to start on an action plan to reduce carbon emissions to net-zero by 2050. The demands also included the declaration of climate change as a national crisis, implementation of a "Green Deal" to serve as a blueprint for a fossil fuel-free future, greater efforts to raise climate change awareness through education, more funding for climate change-related research, and an inclusive policy that reflects the diversity of society.

John Liu, a local sociology professor who studies climate change in Taiwan said the country "has been doing too little, too slow. We should be more ambitious." Noting the proposed amendment of the Greenhouse Gas Reduction and Management Act in the legislature, he told Taiwan News that the march was a good opportunity for civil society to "speak up and demand some action."

As for awareness among the general public, he said most people understand the threat of climate change but that it is "low on the policy agenda." This is a problem, he said, as Taiwan is expected to be among the hardest-hit countries.

Liu also pointed out that due to Taiwan's central position in global supply chains, changes in international regulations will have a major impact on its industries, meaning it has its work cut out for it to adapt in time.

Nuclear Myth Busters founder Shih-Hsiu He stated that in order to be realistic, discussions about transitioning to green energy should include not only ideal targets but also means, one of which remains nuclear energy. He noted that while the Taiwanese public voted to keep nuclear power in a 2018 referendum, the government is "phasing out" its nuclear power plants [by not building new plants or extending the life of current ones].

"The United Nations cares about clean energy, and [clean energy] includes nuclear and renewable," he said. When asked about concerns of safety post-Fukushima, he said that the U.S., Ukraine, and Japan have all continued to use nuclear power after their respective reactor meltdowns over the past few decades, arguing that the answer lies in sound engineering.

Kathleen, a graduate student in music who took part in the parade, told Taiwan News that climate change is not a major concern for most of her friends. She added that those familiar with the issue view it as something to be left to countries like the U.S. and China, which as larger emitters have more of an impact.

Rebekah, a freshman currently taking courses online at an American university, said she had joined the march "to support renewable energy," expressing a sense of immediacy given that Taiwan recorded its highest temperatures in over a century this summer. She said that reducing Taiwan's carbon footprint requires a multi-disciplinary, grassroots effort, adding that effective policy will not be established until the public is engaged. 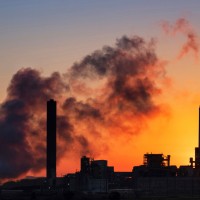 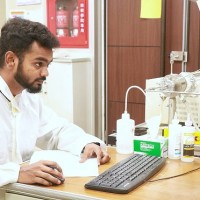