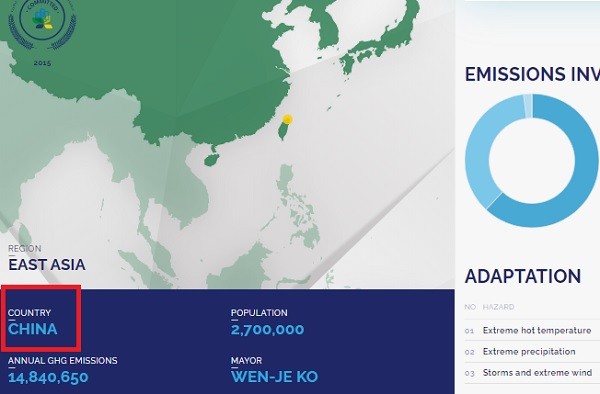 TAIPEI (Taiwan News) — The Ministry of Foreign Affairs stated on Sunday (Sept. 27) that it has lodged a protest against an international organization for listing its cities as part of China.

Six special municipalities in Taiwan, including Taipei, New Taipei, and Kaohsiung, have become a part of GCoM through their memberships with ICLEI. With the aim of promoting sustainability, ICLEI operates several regional offices around the world, including one in Kaohsiung.

However, it has been discovered that these Taiwanese cities have been labeled as part of China on the GCoM's website. In a statement, MOFA said on Sunday it has filed a protest against GCoM, demanding that corrections be made. Taiwan’s representative office in Belgium has also been instructed to express Taiwan’s position over the case with the ICLEI.

“The government will make every effort to defend the name of the country and the rights for local governments to take part in international affairs,” stressed MOFA. The Kaohsiung authorities have also protested with ICLEI Secretary-General Gino Van Begin at being labeled as a Chinese city.

"We do not accept any attempt by the international community or organizations to undermine Taiwan," stressed the Kaohsiung City Government via a statement.