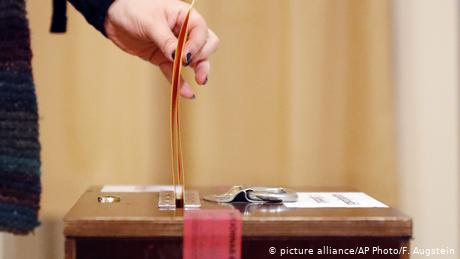 Swiss voters cast ballots on Sunday to vote on an initiative to limit the free movement of people and immigration from the European Union, a move which could heavily strain relations with the bloc.

The referendum was initiated by the populist Swiss People's Party (SVP), which says that the current regulations allow for an average of 75,000 EU citizens per year to enter, leading to overpopulation, rising housing costs and a strained welfare system.

Read more: Half of Germans abroad in Europe stay in Austria, Switzerland

The SVP, which has built its platform on condemning EU influence within Switzerland, has warned that the country is facing "uncontrolled and excessive immigration."

Roughly 1.4 million EU citizens live in the country of about 8.2 million, while around 500,000 Swiss live in EU countries.

The initiative, voted on as part of the country's system of direct democracy, calls for Switzerland to revise its constitution to ensure it can autonomously decide on immigration policy.

The move, however, has seen declining support in recent polls. The most recent survey showed 65% of those questioned opposed the move to scrap an agreement that permits the free movement of people between Switzerland and EU countries.

Critics of the initiative argue that the move would exacerbate a shortage of skilled workers and would endanger Switzerland's wealth.

It is unlikely that the measure will create the double majority needed to pass, winning both the popular vote and most of Switzerland's 26 cantons. However, the SVP has seen surprise victories in the past.

A rejection of the plan could also push forward talks between the EU and Switzerland on a framework agreement to regulate this and other bilateral issues.

Conservatives fear that a deal would gradually subject the country to EU legislation.

Switzerland is not a member of the EU but is part of the bloc's Single Market, which allows for the free movement of people between the country and the 27 member states.

If the initiative passes, authorities would have one year to negotiate an end to the 1999 free movement agreement. The proposal goes even further than a similar SVP-backed measure, passed in 2014, which stipulated quotas on the number of work permits issued to EU citizens.

The vote had been scheduled to take place in May but was postponed since the coronavirus lockdown measures prevented campaigning.

Several other issues are due to be determined in Sunday's vote, including introducing two weeks' paternity leave, the acquisition of fighter jets and easing restrictions on shooting wolves.