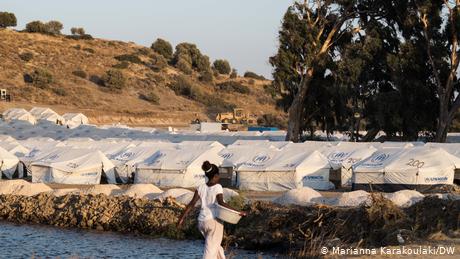 Since September 8, the Moria refugee camp — once Europe's largest — is no more. The camp, where thousands of people lived in catastrophic conditions, was engulfed by flames and burned to the ground.

Six of its former residents, four adults and two unaccompanied minors from Afghanistan, are in pre-trial detention, facing prosecution for arson.

At the time of its destruction, Moria had nearly 13,000 residents, who found themselves suddenly in limbo on the coastal road between Moria and Mytilene, the capital city of Lesbos. They were neither allowed to go back to Moria when the fire died down, nor were they allowed to reach Mytilene.

While the Greek government quickly moved to set up another camp, EU leaders expressed their solidarity and showed signs of willingness to find a viable solution.

On Wednesday, the European Commission announced plans to set up a migrant reception center in Lesbos to be run together with Greece.

"Moria is a stark reminder," said EU Commission President Ursula von der Leyen. "We need to find sustainable solutions on migration and we all have to step up."

Built in what initially looks like an idyllic setting and surrounded by the Aegean Sea, the new camp, referred to as RIC Lesvos by the Greek authorities, has hidden dangers.

"I think that because the new camp is near the sea, it will be dangerous for children," said Firuzeh*, who moved in a week ago.

Doctors Without Borders has described the place, set up on a former shooting range, as worse than Moria.

"In the sun it looks like a nice place where kids can go for a swim. But it is extremely exposed to [inclement] weather and once the weather turns and it starts raining and the wind starts blowing people will have their feet in the water," said Caroline Willemen, field coordinator for Doctors Without Borders' COVID-19 Response team in Lesbos.

The initial hope for change after the destruction of Moria has turned into an endless fear for those living inside the new camp. They fear they've ended up in a new Moria that is far worse, with the global coronavirus pandemic adding to their worries. Many feel they will never be able to get out of what seems like an endless ordeal.

Although RIC Lesvos is seen as the new approach to the EU's hot spots, its residents describe the conditions there as abysmal. From poor hygiene to leftover bullets from the shooting range, refugees have plenty of reasons to be scared of the place.

No 'baths or clean toilets' at new camp

Aliyah*, a 13-year-old girl from Afghanistan, has been sending pictures of the camp through WhatsApp which highlight the poor conditions.

DW saw pictures of babies with skin conditions and children who were hit by tear gas canisters and left with small injuries. All have been left untreated or given minimal provisions, such as topical creams that do nothing. Other photos show children, who have fled war and post-conflict areas, holding bullets they found on the ground.

According to the camp's new residents, the lines for food are endless and food provisions aren't sufficient.

"This camp is worse than Moria," both Firuzeh and Aliyah told DW.

"The environment of the camp is so dirty. Coronavirus is here," she continued, referring to the 240 positive cases inside the camp. "We must be clean, but we don't even have water to wash with, how can we avoid this sickness?" she said, clearly frustrated.

The long-term plans for the camp are not yet clear. While the Greek government has insisted on its commitment to the camp's temporary nature, local Lesbos newspaper Sto Nisi has reported that the rental contract runs until 2025.

At the same time, the government has announced the closure of Kara Tepe, the island's second refugee camp managed by the municipality of Lesbos, and PIKPA, a self-organized camp run by volunteers.

Those who live in either of those facilities will likely be moved to the new camp, although no final decision has been made.

'Not a place where they can live'

In an attempt to convince people to move into the new camp without forcing them, the Migration and Asylum Ministry has said that only those who do so will be able to leave the island.

"When we were out of the camp, they told us that if you come in, we can sort out your papers but now we see that there is no room for our office," Aliyah said.

Most people DW spoke to are worried about their asylum applications not being processed.

"They have started their work about people who have asylum and have their paper but there is a 'bad point' for those who have not had an interview yet, like me," said Firuzeh, who missed her interview due to the destruction of Moria.

Caroline Willemen describes the camp as an inhumane place for people to live in, and she is afraid the new camp will have all the same issues refugees faced in Moria. Tents designed for one family must be shared by several, while single men have been put inside large tents with a capacity of 200.

"My main concern is dignity and mental health," she told DW. "We have a clinic where we treat victims of torture, most of whom are single men, who will end up living inside this enormous tent with 195 strangers. This is not a place where they can live."

Despite the Greek government insisting that the new camp is temporary, Moria 2.0 and its harsh realities are likely here to stay.

*Some names have been changed in order to protect people's identities.

Some quotes have been edited for more clarity.