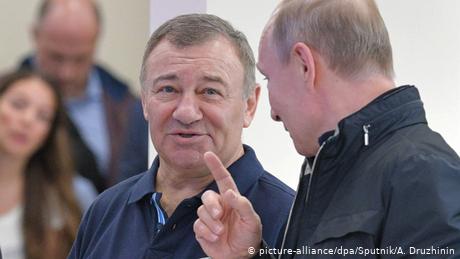 Secret activities of Russian oligarchs, rich businesspeople with connections to the Kremlin, play a role in the so-called Suspicious Activity Reports (SAR) that form the basis of the FinCEN Files. These reports about suspicious financial dealings are submitted to US authorities by banks from various countries.

A large number of them were leaked to the US website BuzzFeed News and evaluated for 16 months by the International Consortium of Investigative Journalists (ICIJ). They provide insights into financial transactions whose legality is in doubt, some connected with money laundering. Here is an overview of some of the oligarchs mentioned in the SARs.

If there is one Russian oligarch who could possibly thumb his nose at the sanctions imposed on Russia by the EU over the annexation of Crimea, it is Arkady Rotenberg. This 68-year-old businessman, a close friend of Vladimir Putin, was one of the first influential Russians to be placed on EU and US sanction lists after the annexation.

A short while afterward, Rotenberg's construction company was given a commission from the state worth billions: to build a bridge from the Russian mainland to the Crimean Peninsula. He carried out the project between 2016 and 2018.

Just at this time, the FinCEN Files suggest, Rotenberg purchased art objects with the help of the British bank Barclays — despite the sanctions. According to the BBC, millions of British pounds were involved; a painting by the Belgian artist Rene Magritte was among the works allegedly bought. A spokesman for the businessman denied the accusations to the Russian media outlet RBC, calling them "baloney."

Arkady Rotenberg was also a client of Deutsche Bank. His business dealings came under internal investigation in 2015, according to reports by the German daily Süddeutsche Zeitung. The bank found no indications of money laundering. But the FinCEN Files are said to show that there is an indirect connection between Arkady Rotenberg, his brother Boris and so-called mirror transactions, controversial operations in which shares are sold and bought simultaneously at different locations. Arkady denied to the Süddeutsche Zeitung that he had owned companies involved in such deals or that he had exfiltrated money from Russia.

Rotenberg has a special status among Russia's oligarchs. Arkady and his brother Boris have known Putin since their youth in Leningrad, today's St. Petersburg. They were in the same judo club. Arkady worked for a long time as a sports trainer before he went into business after the collapse of the USSR and became an entrepreneur. His business interests are wide-ranging, from construction companies and banks to fertilizer manufacturers.

In August 2020, the Russian edition of the finance magazine Forbes declared the Rotenbergs to be the richest family in Russia, with an estimated fortune of some $5.5 billion (€4.73 billion). That sum includes the capital owned by the two brothers and that of Arkady's two children, Igor and Lilia.

Read more: FinCEN files and the actors 'bringing the big banks to justice'

Ever since the revelations brought by the Panama Papers investigation in 2016, it has been known that the cellist and conductor Sergei Roldugin, a previously inconspicuous figure who is also a friend of the president's from St. Petersburg, is behind a network of offshore companies worth millions. The latest revelations show that in October 2010, a company associated with him received some $830,000 from a Cypriot company that, in its turn, is said to have connections with the businessman Alexei Mordashov.

With his steel and mechanical engineering companies, the 54-year-old Mordashov is one of the richest oligarchs, with Forbes placing him in the upper section of its list of the 10 wealthiest Russians. The mainstay of his business empire is Severstal, one of the biggest steel producers in the country. He was financial director of one of Severstal's predecessor companies, and bought up the state-owned business during the big privatization wave in the 1990s. Mordashov, who speaks fluent German, is also active in Germany. The billionaire owns 25% of the tourism giant TUI and sits on its supervisory board.

Alisher Usmanov, 67, is also one of the 10 richest Russians, according to Forbes. Usmanov, who originally comes from Uzbekistan, is involved in almost all lucrative sectors of the Russian business world, including the metal industry, banks and media. In the past few years, he has expanded his influence on social media and bought up the biggest networks, including VK, the Russian counterpart to Facebook.

Usmanov's name appears in the FinCEN Files in connection with Putin's adviser Valentin Yumashev. The latter man was once the powerful head of the Presidential Executive Office under Russia's first president, Boris Yeltsin, is seen as someone who paved the way to the Kremlin for Putin. He told DW in an interview that he had seen Putin, the former head of the FSB intelligence agency, as a "very strong figure" in comparison with other potential candidates to be Yeltsin's successor.

Since Putin was elected president in 2000, Yumashev has been active in the background as a lobbyist and entrepreneur, in the real estate business, among others. He is married to Yeltsin's daughter, Tatyana. According to the FinCEN Files, Yumashev received $6 million from Usmanov between 2006 and 2008 for certain "services" that are not specified.

One of the best-known Russian oligarchs, and one of those hardest-hit by sanctions, is Oleg Deripaska, who is 52 years old. He was once considered the richest Russian, but lost his top position partly because of the US sanctions imposed on his empire of companies, particularly his aluminum factories, in April 2018. He built up his fortune in the 1990s through metal trading and invested in the aluminum industry in Siberia. He is reputed to have good connections to the Kremlin.

He is mentioned in two places in the FinCEN Files. In one case mentioned, Deutsche Bank handled transactions worth $11 billion for companies from his network between 2003 and 2017. In a SAR, Deutsche Bank alludes to an US investigation of Deripaska in connection with a cash transfer of $57.5 million in 2007. The bank mentions allegations made by the US authorities with regard to possible connections with organized crime. Deripaska denies having ever laundered money or committed other financial offenses.

In the other case, it was revealed that at least $3 billion was transferred via a small Latvian bank in connection with Deripaska's businesses between 2002 and 2016. The money is said to have been meant for lobbyists in the US, private jets and property deals.