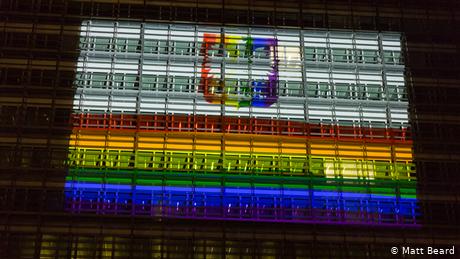 Anyone walking past the headquarters of the European Commission in Brussels earlier this week would have seen a dazzling light display above their heads, in all colors of the rainbow.

The display was organized by LGBT+ rights advocacy group AllOut in collaboration with the Polish Campaign Against Homophobia. The group handed over a petition with over 330,000 signatures to the European Union demanding the bloc take urgent action over homophobic and transphobic policies in Poland.

Commission President Ursula von der Leyen raised the issue in her State of the European Union address earlier in the month, saying that "LGBTI-free-zones are humanity-free zones and have no place in our union."

But for those facing discrimination in Poland, grand statements by lawmakers in Brussels may be ineffective.

"When I first got into (LGBT+ rights) activism in 2018, it was relatively peaceful," says Patryk Cialon, a 19-year-old Pride organizer in the western city of Jastrzebie-Zdroj, near the Czech border. "And then, 2019 came — and everything got a lot more difficult."

Politicians in the ruling national conservative PiS (Law and Justice) party have spoken out actively against LGBT+ people in public life since they took power in 2015. Jaroslaw Kaczynski, leader of the party, has been vocal against the teaching or affirming of homosexuality in schools and gay pride marches have frequently been canceled or banned under his party's leadership.

Then in 2019 a new trend emerged. Municipalities and provinces in Poland began declaring themselves "LGBT-ideology-free zones," under PiS' encouragement. Leaders said they were promoting family values, but the move coincided with widespread bans on LGBT-led events. Over 100 zones have now made the change, mostly in rural areas in the country's south and east.

"At Pride in July 2019 in Bialystok I heard stories of attacks," Cialon says. "And then this year, my friends sent me videos from Pride — it was awful. I heard there were people with bombs." Cialon believes some of the police were forced to protect Pride attendees, although he says they were probably being coerced into doing their duty.

"Basically from that moment on — they showed how far they were willing to go," Cialon says.

Read more: In Poland, an inclusive soccer club stands up to homophobia

The situation for LGBT+ people was made even more dire when President Andrzej Duda, a conservative independent who is supported by PiS, was re-elected for a second term in July 2020. He has repeatedly pledged to never allow gay marriage or gay adoption in the country and has claimed that the existence of LGBT+ people in Poland is a "foreign ideology" that goes against Polish family values. By denying that there are LGBT+ people in Poland, Duda is aiming to strip away their most fundamental human rights.

"PiS has a strategy that they take one group and they antagonize that group; make them scapegoats," Cialon says. "They have done it with immigrants, feminists, climate activists. Now it is LGBT+ people."

Protests heated up following Duda's reelection, when dozens of pro-LGBT+ demonstrators were arrested in early August. Activists like Margot Szutowicz, who was imprisoned for a month, have become proponents of less peaceful methods of protest. But another prominent LGBT+ activist based in Krakow, Bartosz Staszewski, who campaigns for equal marriage, is among those who say this type of protest damages the cause.

'Too late' for the boiling frog

Matt Beard, executive director of advocacy group AllOut, believes that EU action could be a catalyst for change for LGBT+ people in Poland.

"I think you can compare the situation for LGBT+ people in Poland to a frog boiling in water," says Matt Beard, "Maybe it is happening slowly — but by the time the frog tries to jump out, it will be too late."

European Commissioner for Equality, Helena Dalli, has been a consistent critic of recent actions in Poland. In July 2020, she was instrumental in the EU withholding funding under a twinning program from six of the "LGBT-free zones," saying that "EU values and fundamental rights must be respected by member states and public authorities."

But activists including Beard say this does not go far enough. "The EU's words really need to be put into action," he says.

His group is calling for two concrete actions: Firstly, an official infringement procedure under Article 7 of the Treaty of the European Union, which allows the bloc to suspend certain rights from a member state. Beard and fellow activists argue that Poland has been non-compliant in the treaty by their treatment of LGBT+ people.

The second demand is for a further withholding of EU funding from Poland.

Beard thinks these actions are a good start. "We can't keep stumbling blindly into disaster," he says.

On the ground in Poland, Cialon is less optimistic that EU action can make any difference in his country.

"I don't think Brussels can do much — even threatening to kick us out of the EU won't make any difference," Cialon says. "We need more awareness of what is going on here in the media outside of Poland, and we need the activist groups in the country to work more closely together."

But even then, Cialon does not know whether this can make real change. "I'd say it is 50-50 about whether we are at a turning point," Cialon says.

Staszewski thinks that EU actions could be fundamental for Poland. "For me, I expect that the European Union will be not a union of empty words," Staszewski explains. "I think the LGBT rights are now the crucial thing that will tell us the future of Poland in the European Union."

Right-wing groups have enjoyed success in recent months with "pro-family charter" marches and events. At a recent event in Gdansk, hundreds chanted they would "stop the rainbow aggression." And a nationalist, anti-LGBT+ march in Warsaw this week was attended by several prominent PiS lawmakers — including President Duda.

"I've had some doubts about my activism," says Cialon. "It's tiring, I'm exhausted, mentally exhausted. But we have to keep going for young LGBT+ people. It would be so easy to leave Poland and pretend it doesn't exist — but I can't do that."

For Matt Beard, who left Brussels with a verbal promise from the European equality commissioner that the EU was carefully considering action, the rainbow flag together with the Polish flag adorning the headquarters of the European Commission in the light display seemed to symbolize a new beginning.

"History will judge us — if we don't do something now," he says.

Beatrice Christofaro contributed to this report