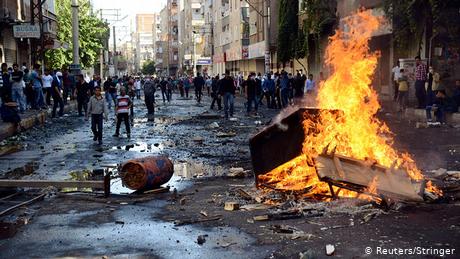 Turkish prosecutors issued warrants Friday for the detention of 82 people over 2014 protests about the siege by Islamic State of the Syrian Kurdish town of Kobani.

At least 18 of the suspects were detained during police raids in seven provinces, Anadolu Agency reported.

The suspects include Ayhan Bilgen, the current mayor of the eastern city of Kars, six former HDP lawmakers, and other former party executives, the agency said.

What were the Kobani protests?

Protesters took to the streets in Turkey's mainly Kurdish southeast in early October 2014, angered at what they perceived to be the government's inaction against Islamic State militants who had besieged Kobani.

Read more: Kurds protest in Germany over 'IS' attacks on Syrian town of Kobani

What is the basis for the arrest warrants?

Ankara accuses the Kurdistan Workers Party (PKK) militant group of inciting the demonstrations. It has also accused the HDP of having links to the PKK and supporting the protests. The HDP, the third largest party in the Turkish Parliament, has denied the accusations.

Prosecutors in Ankara said arrest warrants were issued over "several calls made to invite the public to the streets and carry out terror acts," adding that suspects would be sought in seven provinces.

Read more:Art according to the rules: Self-censorship in Turkey

"The Ankara Prosecutor's Terror Crimes Investigation Bureau has launched an investigation on the PKK terrorist organisation and its so-called executives, as well as certain political party executives and members... and, at the current stage, ordered the detention of 82 suspects," the prosecutor's office said.

It was not immediately clear why the investigation against the 82 people was launched six years after the rioting.