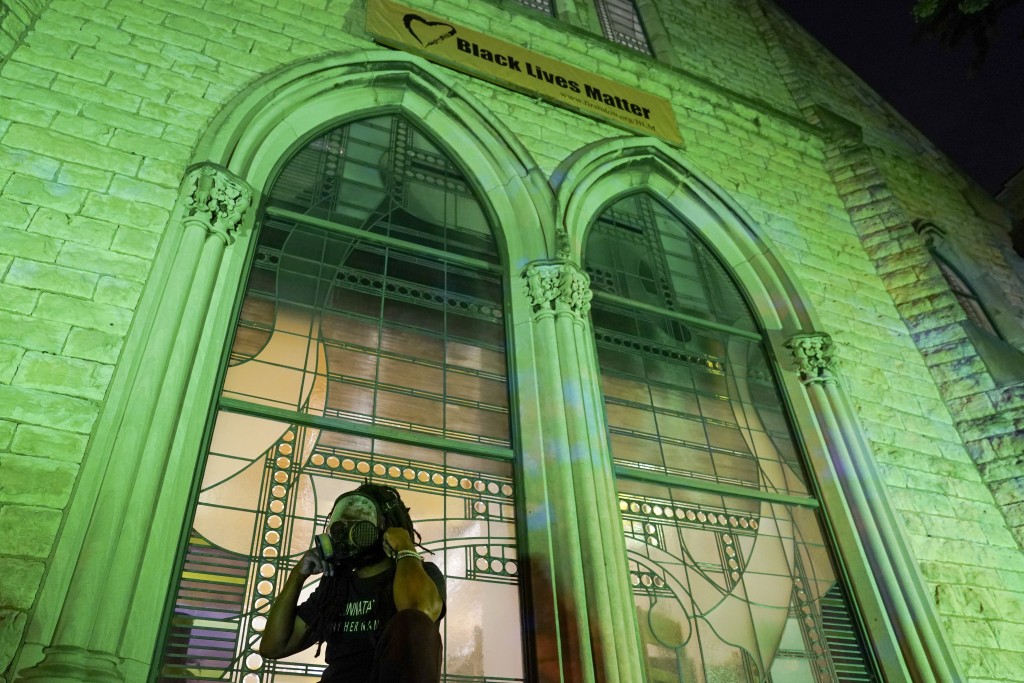 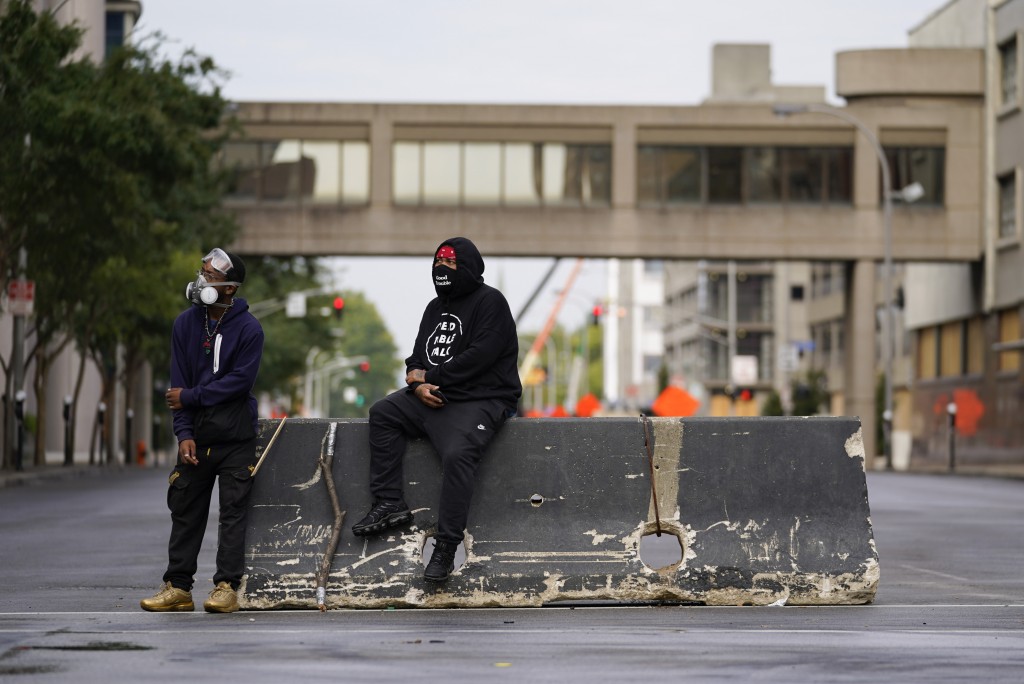 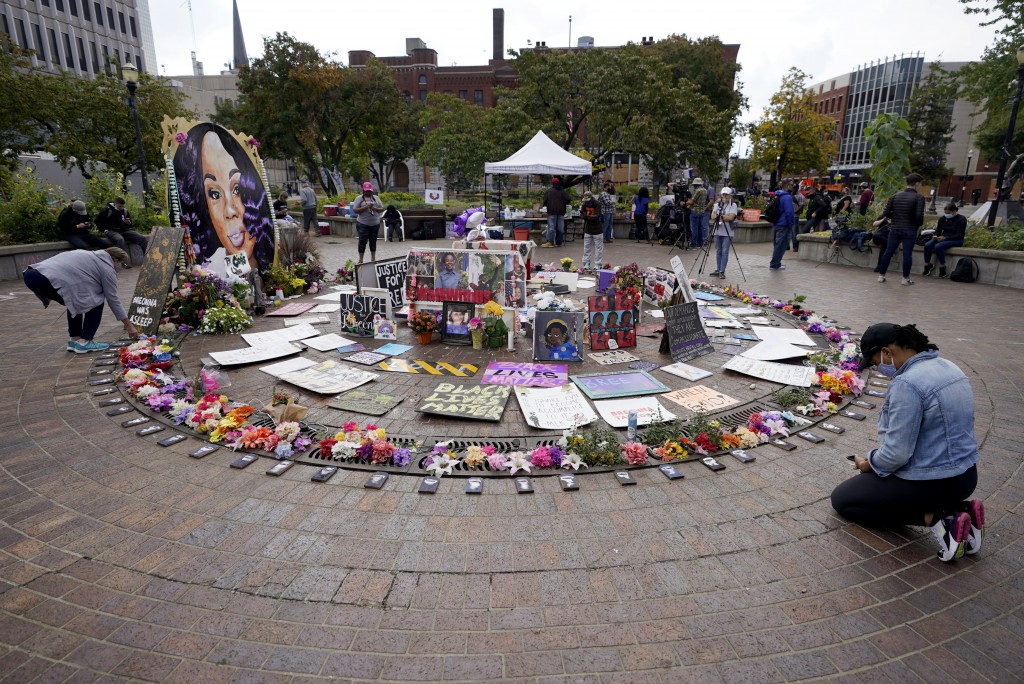 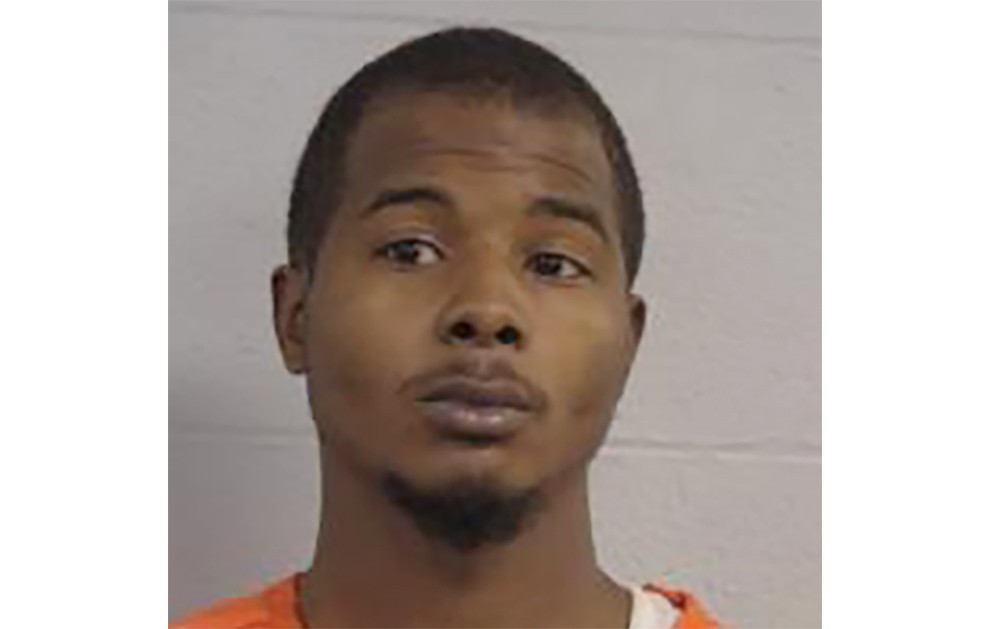 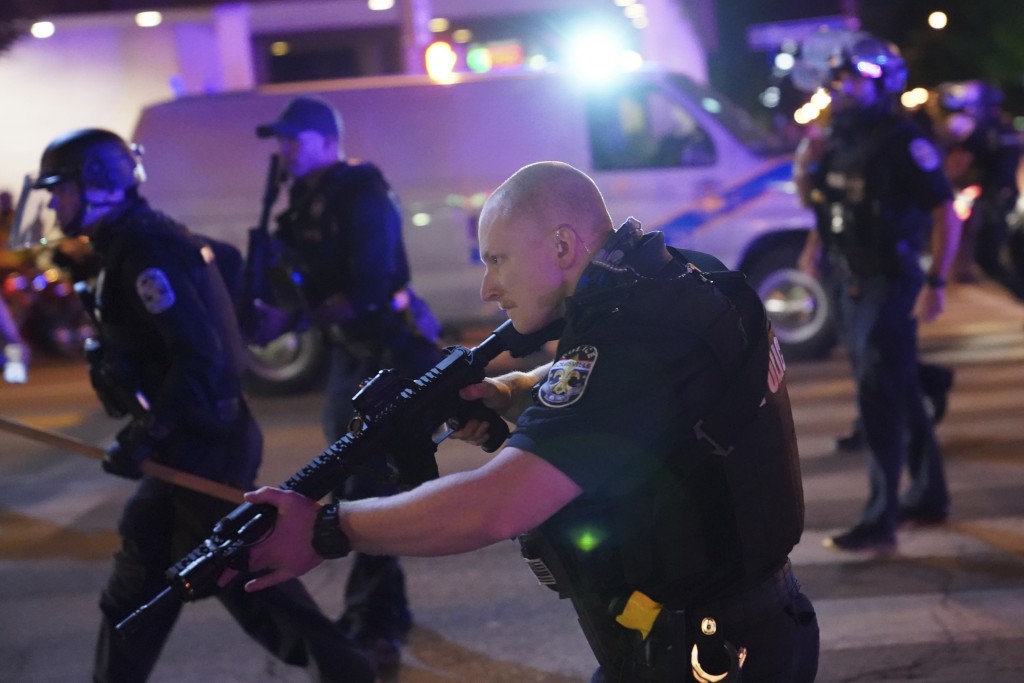 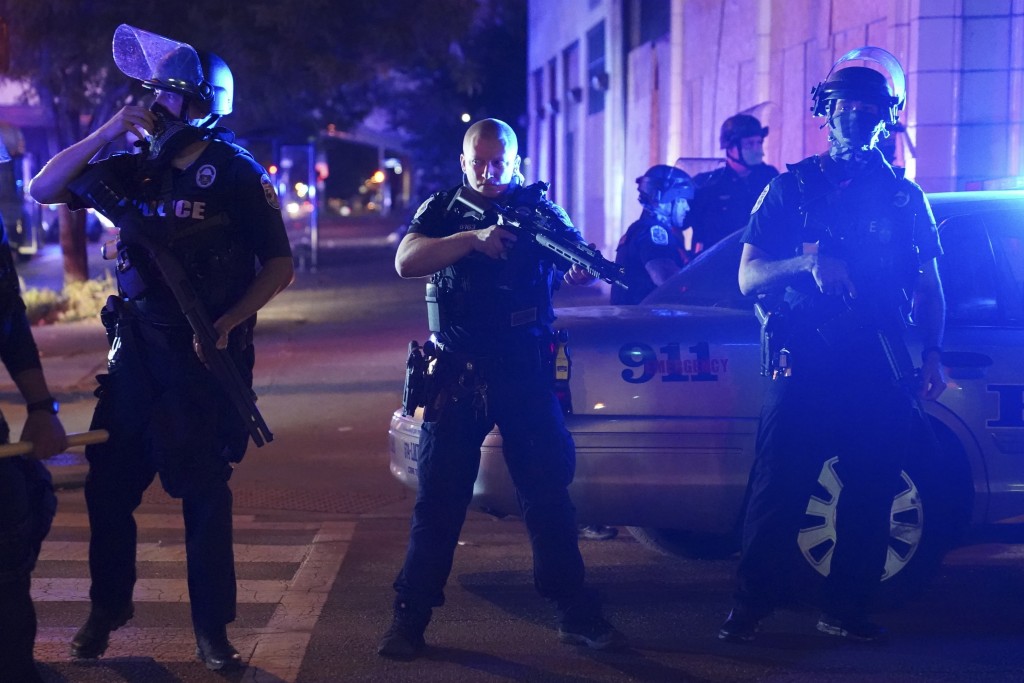 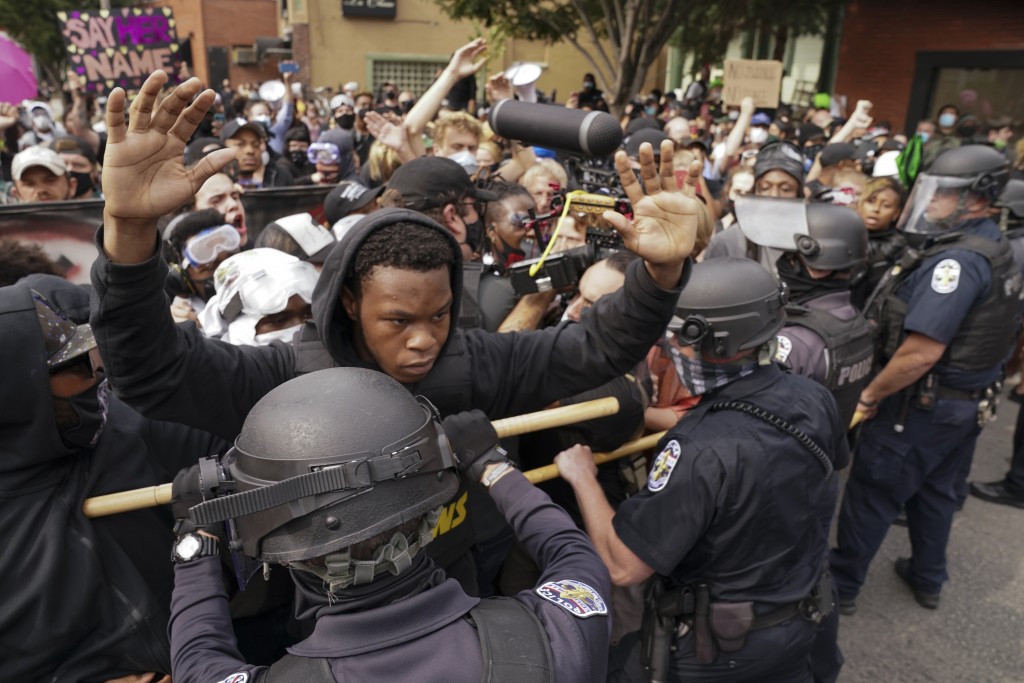 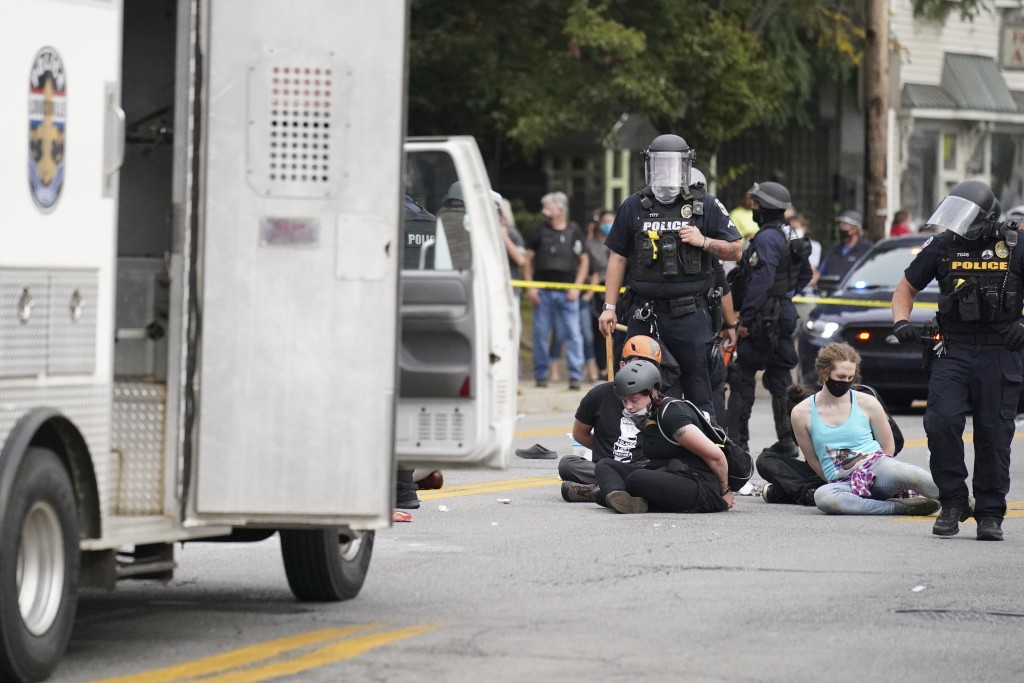 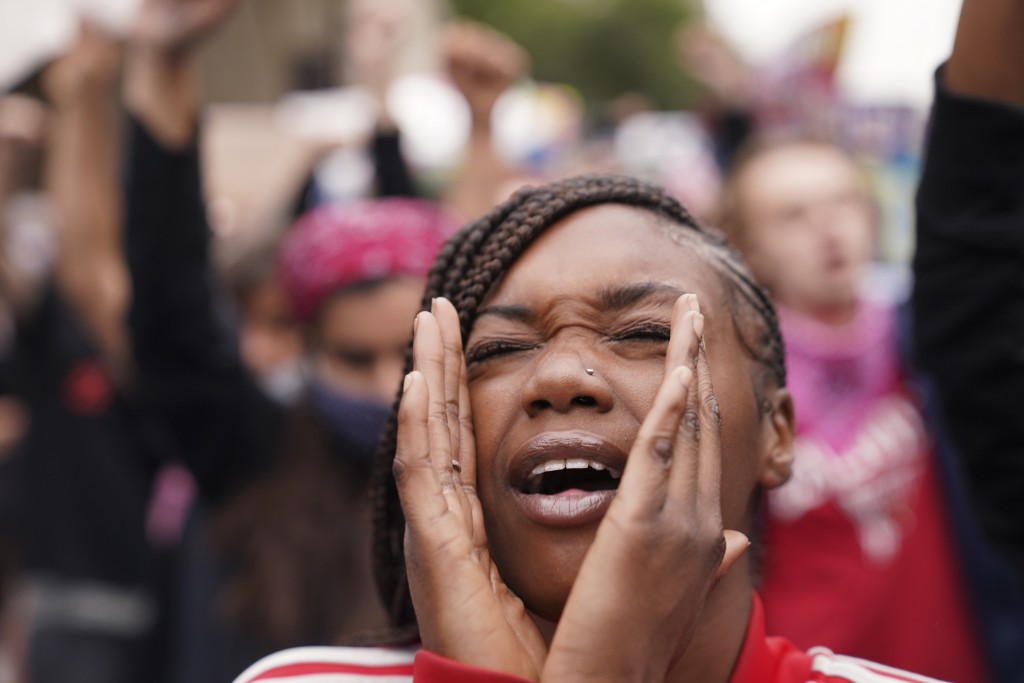 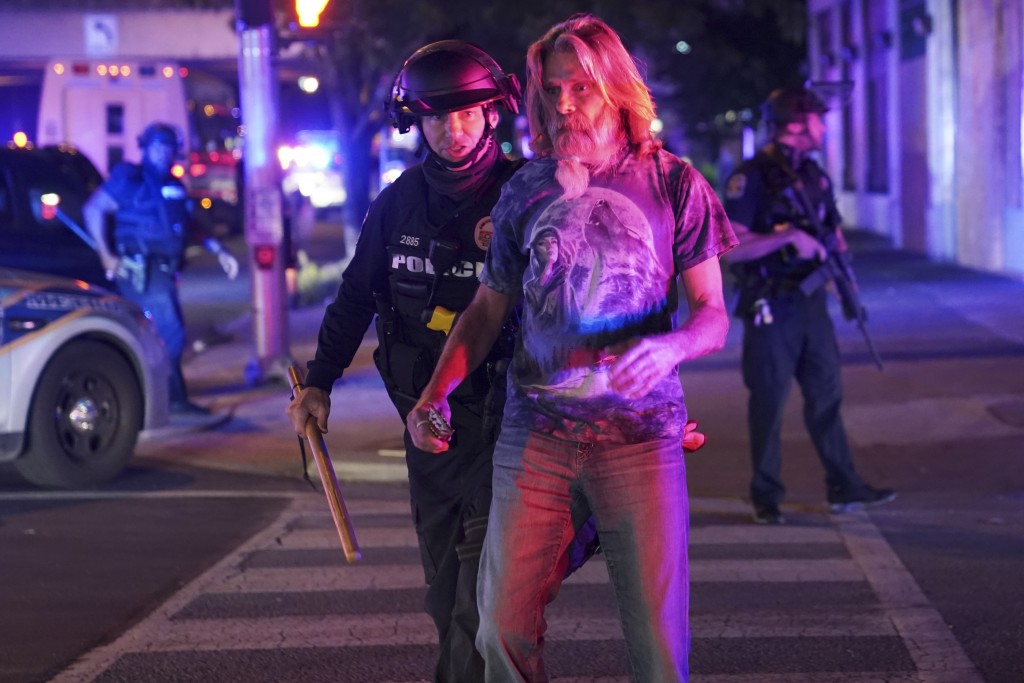 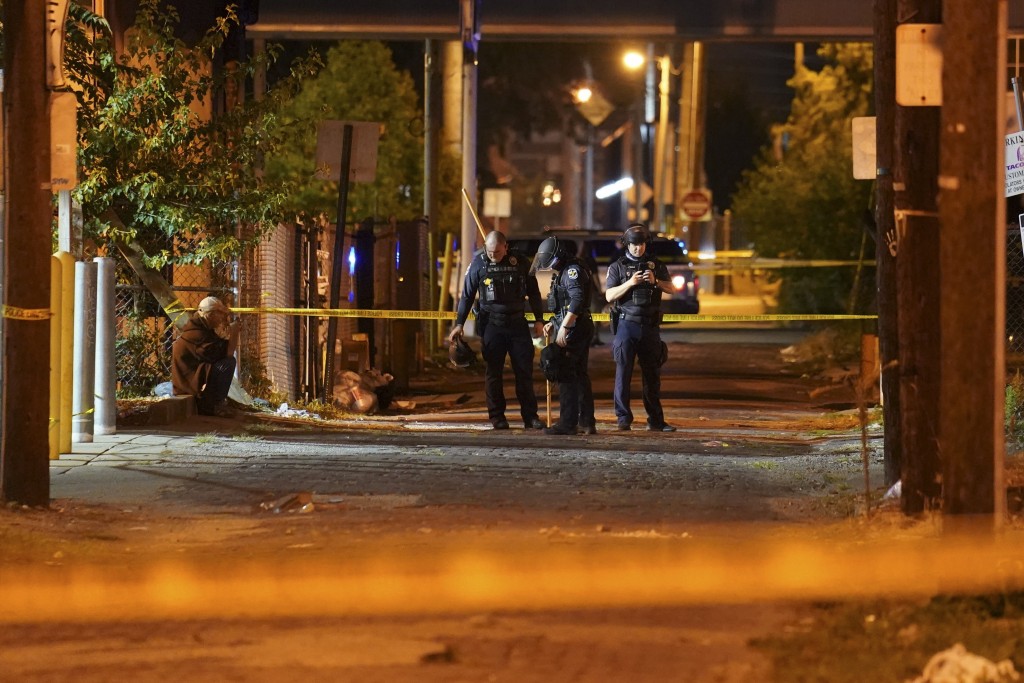 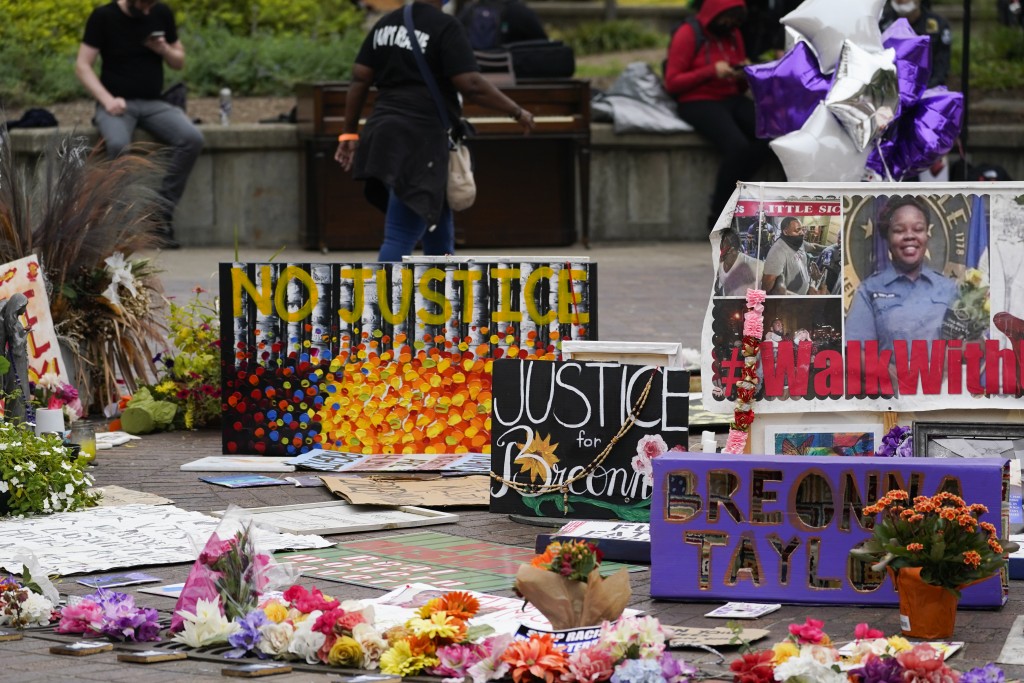 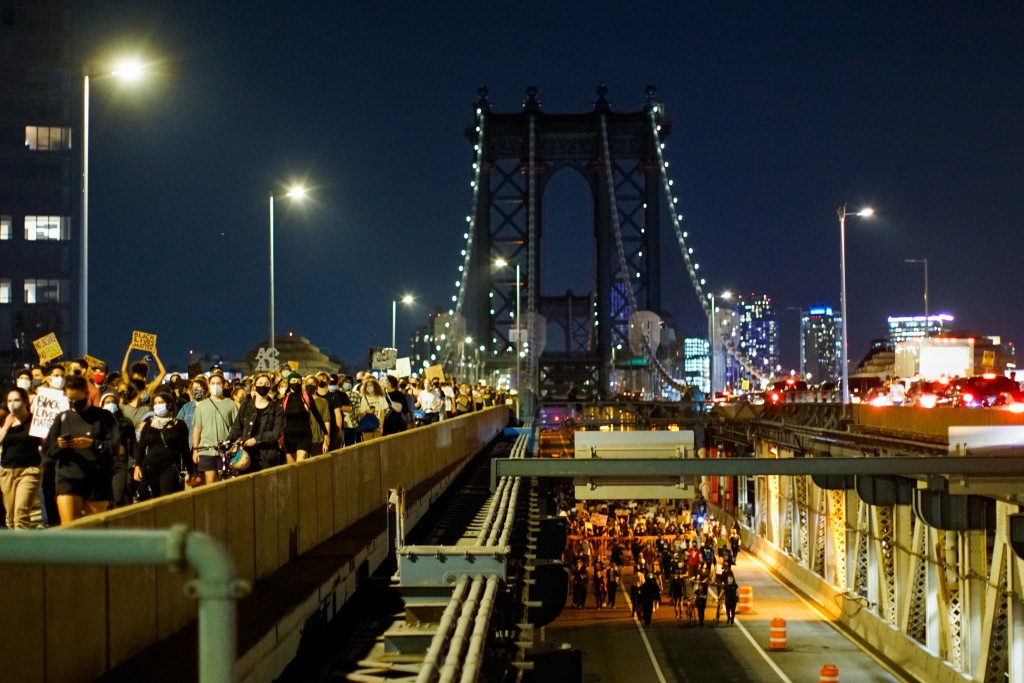 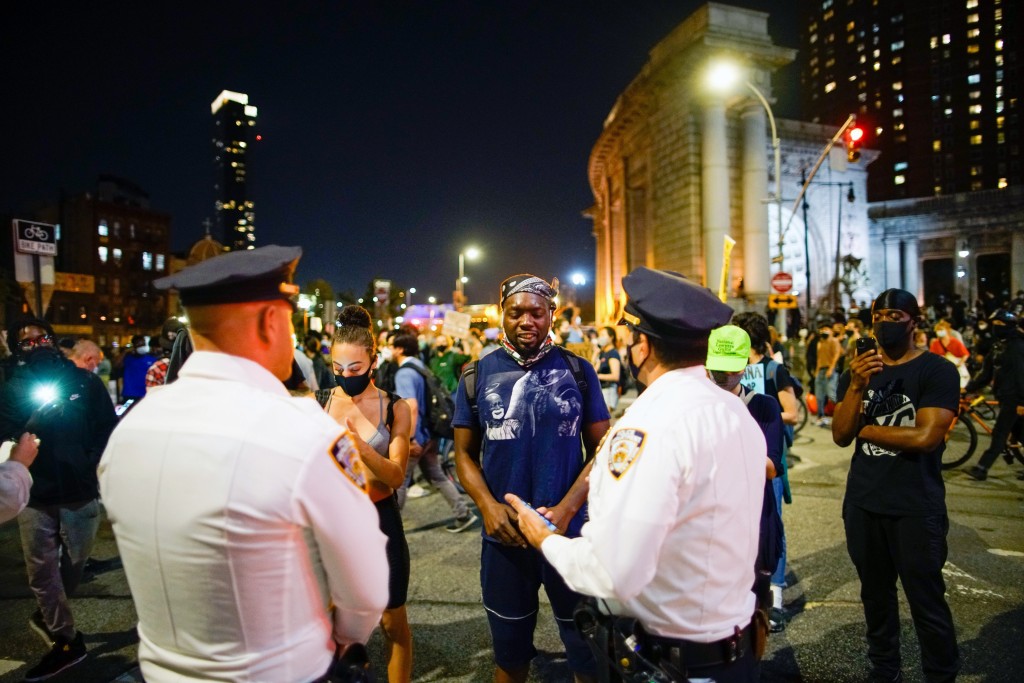 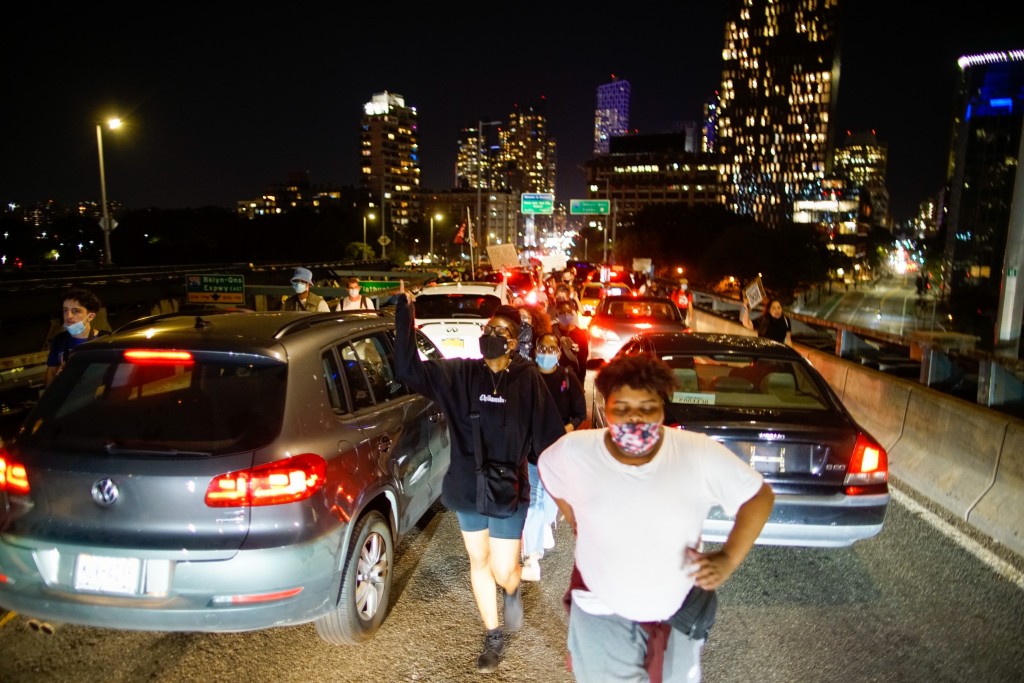 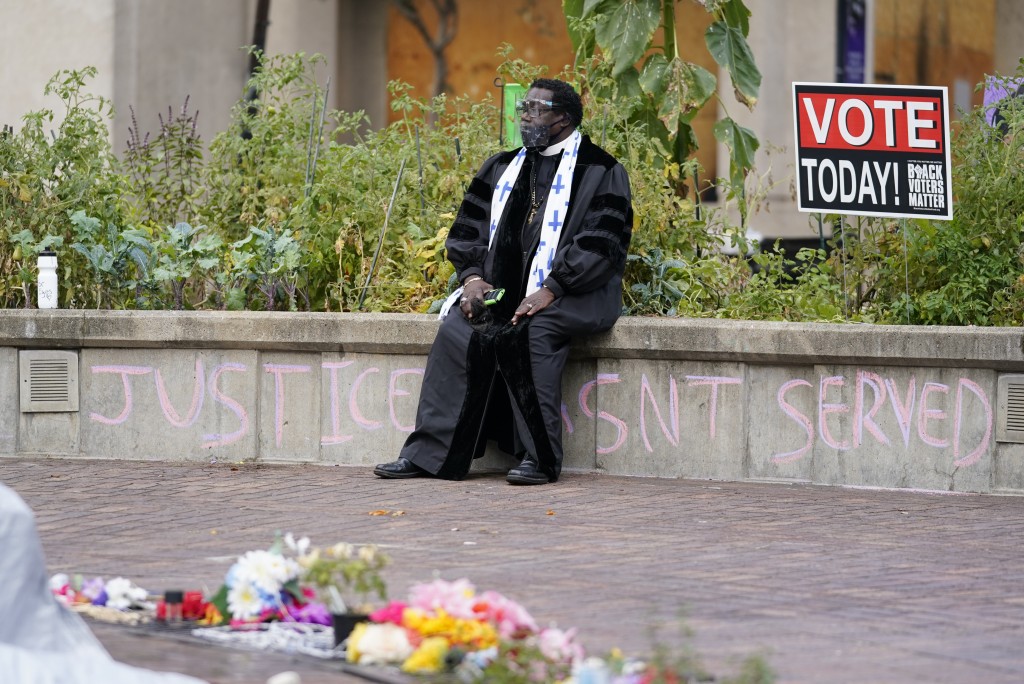 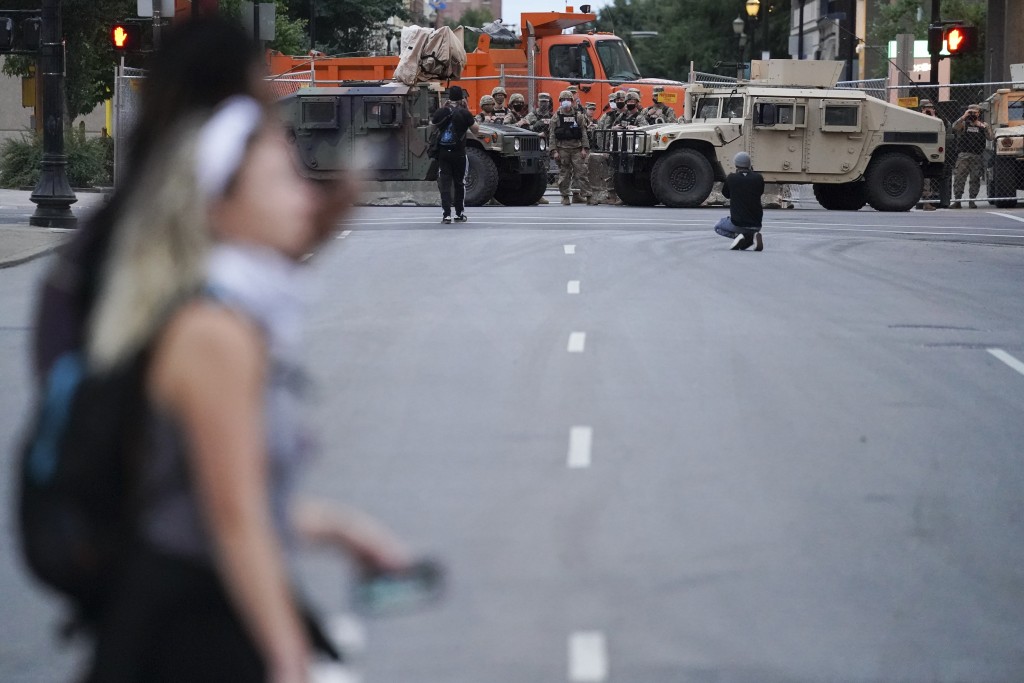 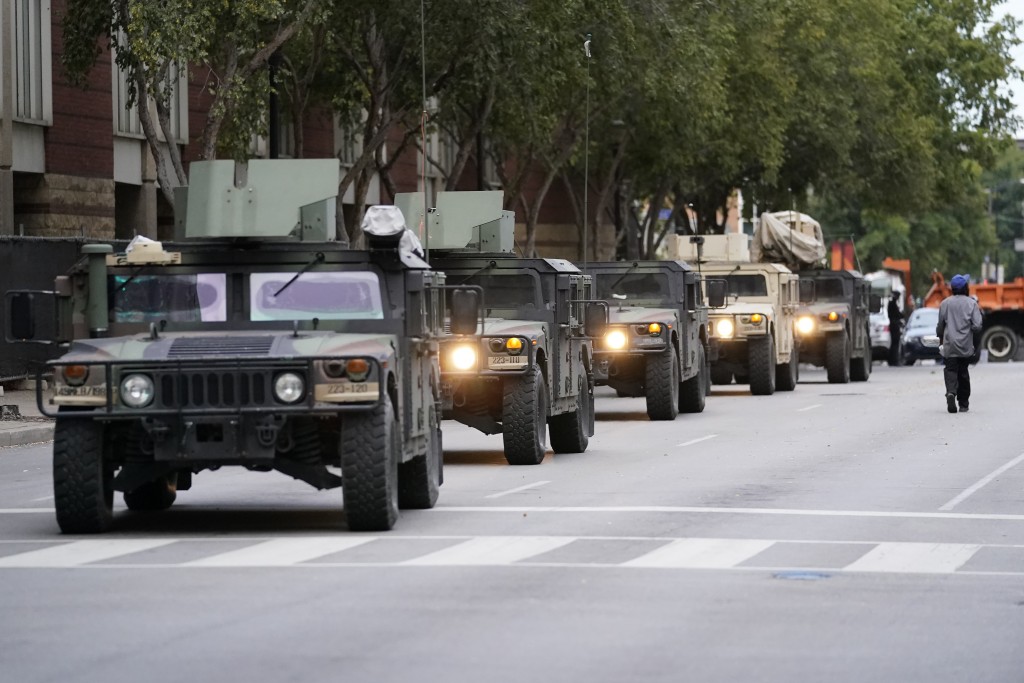 LOS ANGELES — Authorities say at least one person was hurt when a vehicle ran into a small crowd of people protesting police brutality in Los Angeles Thursday night.

About 30 minutes later, KCAL9 TV showed helicopter footage of a white sedan pushing slowly through a crowd of marchers blocking another intersection on Sunset.

A group of protesters in a black pickup truck chased down the white sedan and cut it off. They confronted the driver and banged on the sedan’s windows before the car drove away.

It wasn’t immediately known if anyone was hurt in the second incident.

There were no arrests. Los Angeles Police Officer J. Chavez says investigators are still gathering information about both incidents.

A few dozen demonstrators marched through Hollywood for hours on Thursday, one of many protests across the country demanding justice for Breonna Taylor. Demonstrators were angered after it was announced that the officers who shot the Black woman in her Louisville, Kentucky, apartment during a drug raid last March wouldn’t be charged for her death.

A protest has ended outside a Louisville church where demonstrators had rallied against a grand jury decision in the Breonna Taylor case.

Several dozen demonstrators left the First Unitarian Church around 11 p.m. Thursday after a negotiated end to a tense confrontation. Police who had gathered there with riot gear also pulled back.

Several arrests had been made earlier that evening at an intersection outside the church. But there appeared to be no police interference as the protest disbanded.

“I am not sad, I am angry,” she said, vowing to return downtown Friday to help her friends get out of jail.

The latest demonstrations erupted after the announcement Wednesday that no police officers had been directly charged in the fatal shooting of Taylor. The Black woman was killed during a police raid gone wrong in March.

HERE’S WHAT YOU NEED TO KNOW ABOUT THE BREONNA TAYLOR CASE:

A Kentucky grand jury has brought no charges against Louisville police for the killing of Breonna Taylor during a drug raid gone wrong. Prosecutors said Wednesday that two officers who fired their weapons at the Black woman were justified in using force to protect themselves. Instead, the only charges brought by the grand jury were three counts of wanton endangerment against fired Officer Brett Hankison for shooting into Taylor’s neighbors’ homes. Taylor was shot multiple times by officers who burst into her home on March 13 during a narcotics investigation.

-- A timeline of events related to the death of Breonna Taylor

ROCHESTER, N.Y. — Protesters in Rochester, New York, marched in the city Thursday night, chanting and singing “we want freedom” and calling for justice for the death of Breonna Taylor.

Hundreds of demonstrators marched to the city’s public safety building. Once they got there, protesters sat on the ground in front of the building and listened to speakers and songs. The speeches ended around 10:30 p.m. and a speaker with the group "Free the People Rochester," an organizer of the demonstration, dismissed the protesters from the scene.

Demonstrators were also calling for justice in the suffocation death of Daniel Prude, a Black man who died earlier this year after Rochester police placed a hood over his head and held him down.

Several arrests have been made near a downtown Louisville church where people protesting a grand jury decision in the Breonna Taylor case had gathered.

Among those arrested Thursday night was state Rep. Attica Scott. The Louisville Democrat, who has served in the legislature since 2017, has pushed for legislation outlawing no-knock warrants criticized by protesters. Her Facebook page includes open calls for justice for Taylor, a Black woman killed during a police raid gone wrong last March.

About 200 people remained in the area outside the First Unitarian Church, where demonstrators apparently took refuge to avoid arrest for violating a nighttime curfew. Some taunted officers in riot gear who stood nearby.

The stone gothic-style church was built in the late 19th century and is known for its progressive ideology. A large Black Lives Matter banner hangs outside it.

No police officers were directly charged by a grand jury in the fatal shooting of Taylor.

Lavel White, a regular protester in downtown Louisville, says he felt drawn to the latest Breonna Taylor march because he was devastated by the grand jury decision in the case.

He felt angry that the months had passed before Wednesday’s announcement.

No police officers were directly charged in the fatal shooting of Taylor, a Black woman killed during a police drug raid gone wrong last March.

White said officials left the city on edge, waiting so long for such disappointing news.

“My wife is a Black woman and I’m a Black man. So they can just barge in my house and kill me and get away with it?” he asked.

He ended up at a church where scores of protesters had gathered Thursday night as police with riot gear stood nearby.

A speaker addressing protesters gathered for the Breonna Taylor case that anyone who leaves their spot outside a Louisville church could face arrest. Riot police could be seen nearby.

Scores of people gathered Thursday night outside the First Unitarian Church on Thursday night and remained after a 9 p.m. curfew took hold. Police in riot gear were lined up on the opposite of an empty parking lot across the street from the side of the church.

It was the second night of protests over a grand jury decision in the killing of Taylor, a Black woman shot in a police raid gone wrong. The grand jury on Wednesday didn’t bring homicide charges against the white officers who burst into her Louisville apartment during a drug investigation in March.

Scores of demonstrators have gathered in Louisville, despite a nighttime curfew and nearby police in riot gear, marking a second night of protests in the Breonna Taylor case.

The curfew took hold at 9 p.m. Thursday in the Kentucky city as the protesters met up at the First Unitarian Church. Police in riot gear could be seen blocking nearby streets. People in the crowd chanted “Black Lives Matter.”

Before the march began, protester Shameka Parrish-Wright told the crowd to stay together and take care of each other if they were met with force.

“We want to show the country and the world what we’re about,” Parrish-Wright said. Police blocked roads as they marched. Police, meanwhile, were seen nearby and patrol cars blocked some roads. There was no immediate signs of a confrontation.

Protesters have gathered in Rochester, New York, following a grand jury’s decision to not charge officers in the killing of Breonna Taylor, the Black woman in Kentucky whose death garnered global attention.

“We are outraged by yet another failure of the legal system,” said a statement from Free the People Rochester, an organizer of the demonstration.

The group said on Instagram early Thursday that it was inviting people to the protest. “The grand jury’s decision to not hold Breonna Taylor’s murderers accountable tells us that as long as the police exist, Black lives will be devalued and endangered.”

A grand jury Wednesday didn’t bring homicide charges against the officers who burst into her apartment during a drug investigation in March.

Kentucky’s governor has condemned the shooting of two Louisville police officers and is calling for protesters to be peaceful after the decision not to charge officers in the killing of Breonna Taylor.

Democratic Gov. Andy Beshear said Thursday that “the answer to violence can never be violence.”

Beshear says he spoke with President Donald Trump on Wednesday night after the officers were wounded during demonstrations in Kentucky’s largest city over a grand jury decision in the case of Taylor, a Black woman killed during a police raid gone wrong.

Protests erupted in Louisville and in other cities nationwide overnight after the police officers involved in the raid weren’t directly criminally charged in her fatal shooting.

Beshear said the president offered federal assistance if needed, but says they agreed at the time that the city and state had “appropriate levels” of law enforcement on the scene.

Protests turned violent in some U.S. cities Wednesday night, hours after the grand jury decision in the Breonna Taylor case in Kentucky.

Police in Seattle made 13 arrests as authorities said people smashed windows and spray painted buildings. Multiple officers were injured and one was struck in the head with a baseball bat, cracking his helmet.

In a statement, Seattle police also said they were aware of a video that apparently shows a bike officer’s bike rolling over the head of someone in the street. The incident will be investigated, authorities said.

In Portland, Oregon, people hurled Molotov cocktails at officers. Thirteen were arrested. Denver police said a man was detained after driving his car through a group of protesters. Police said no injuries were reported there.

Cities around the country saw protesters take to the streets following a Kentucky grand jury’s decision to not indict officers directly in Taylor’s fatal shooting.

Democratic U.S. Senate candidate Amy McGrath says there is a need to “tackle the systemic racism” in the U.S.

McGrath is challenging U.S. Senate Majority Leader Mitch McConnell in Kentucky’s November election. She met in downtown Louisville on Thursday with some of the protesters who have taken to the streets to seek justice for Breonna Taylor.

Demonstrators turned out Wednesday in Louisville and throughout the country to express their disappointment that police officers weren’t criminally charged in her fatal shooting during a botched drug raid in March.

McGrath called for Kentucky Attorney General Daniel Cameron to release details about the evidence presented to the grand jury in the Taylor case. She faced pushback from some protesters. Rose Henderson says McGrath’s appearance was “all about politics and cameras.”

White House press secretary Kayleigh McEnany says she’s not aware of any conversation between President Donald Trump and the family of Breonna Taylor but that their hearts go out to her family.

Asked what the president’s message is to Taylor’s family, McEnany said what happened is “a horrible tragedy” and that their hearts are also with the two police officers who were shot Wednesday night during protests in Louisville.

Cities around the country saw protesters take to the streets following a Kentucky grand jury’s decision to not indict officers in Taylor’s fatal shooting.

An online news publisher says two of its reporters were arrested during protests in Louisville after a grand jury’s decision to not indict officers in the fatal shooting of Breonna Taylor.

Daily Caller publisher Neil Patel says the two reporters for the news site were peacefully doing their jobs Wednesday night but police refused to release them.

Cities around the country saw protesters take to the streets following a Kentucky grand jury’s decision.

An arrest citation says video has been recovered that shows 26-year-old Larynzo Johnson shooting at two police officers who were wounded during protests in Louisville over a grand jury’s decision in the fatal shooting of Breonna Taylor.

Johnson has been charged with two counts of assault on a police officer and multiple charges of wanton endangerment of police officers.

Interim Police Chief Robert Schroeder said the two officers are “doing well and will survive their injuries.” Maj. Aubrey Gregory was shot in the hip and was treated and released from the hospital. Officer Robinson Desrouches was shot in the abdomen and underwent surgery.