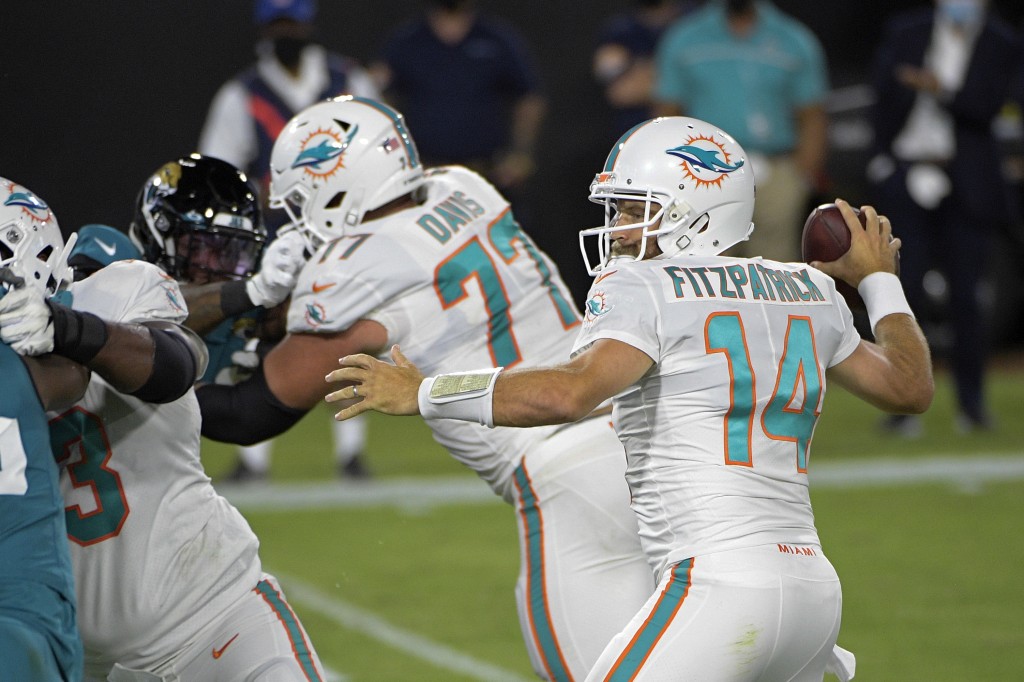 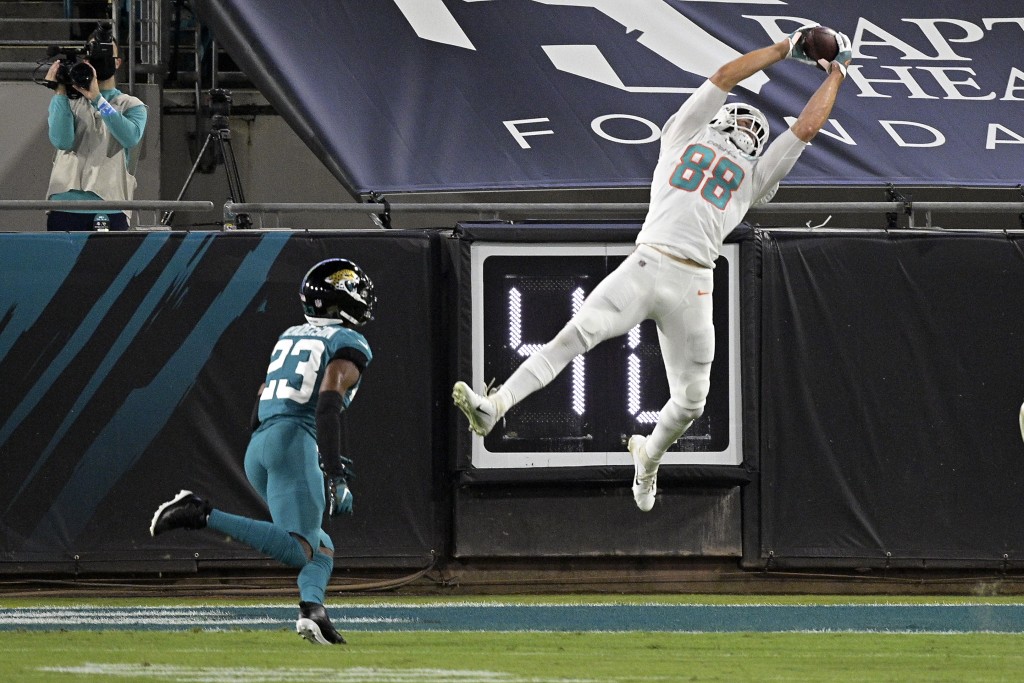 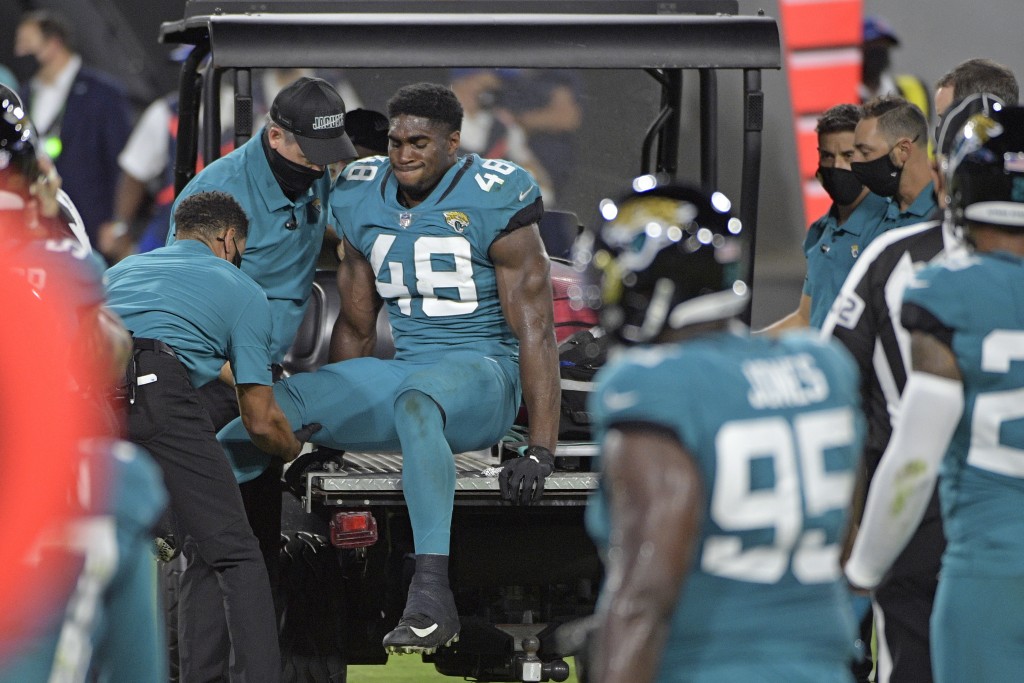 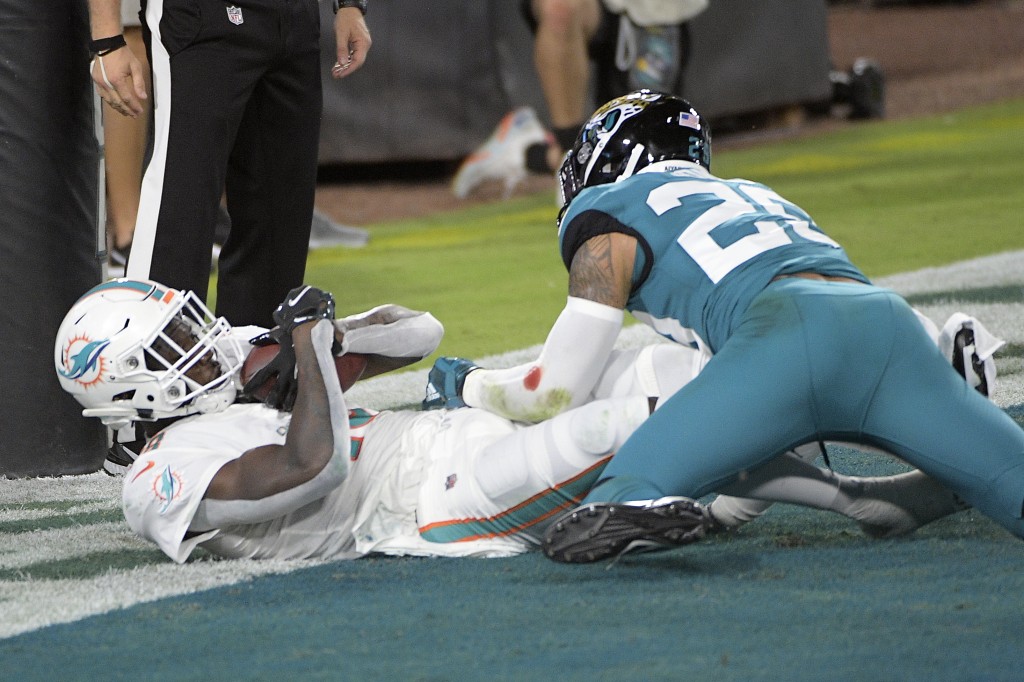 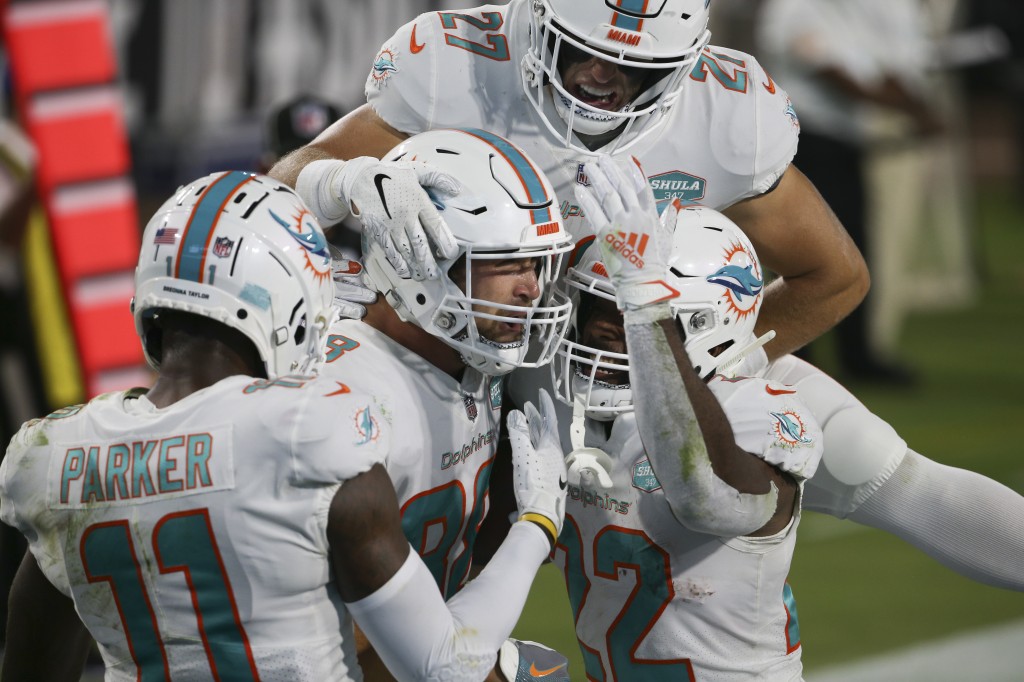 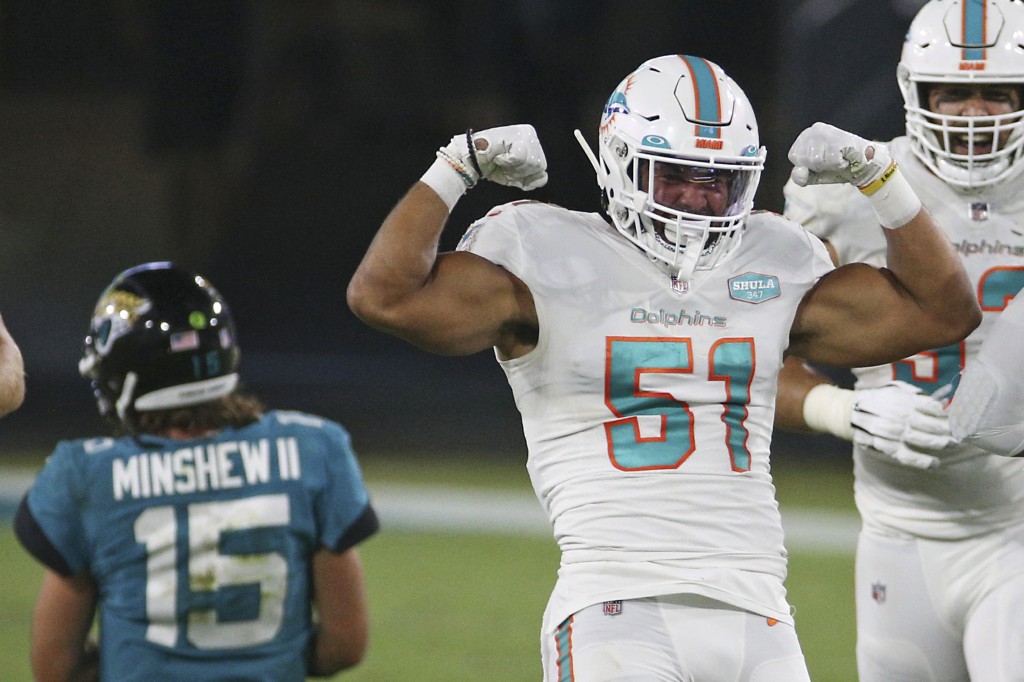 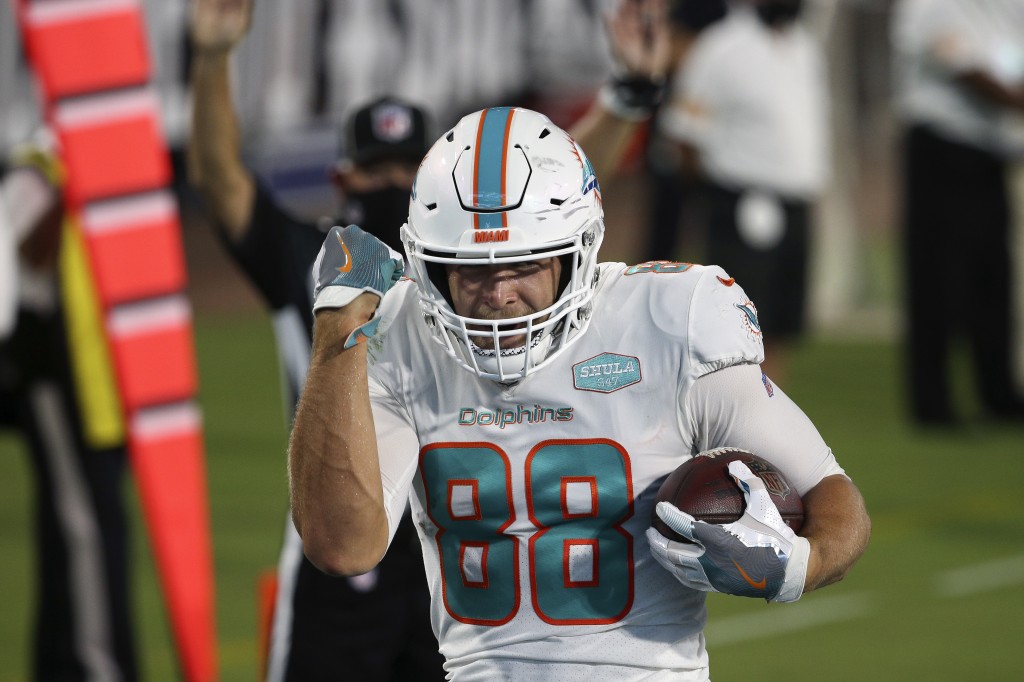 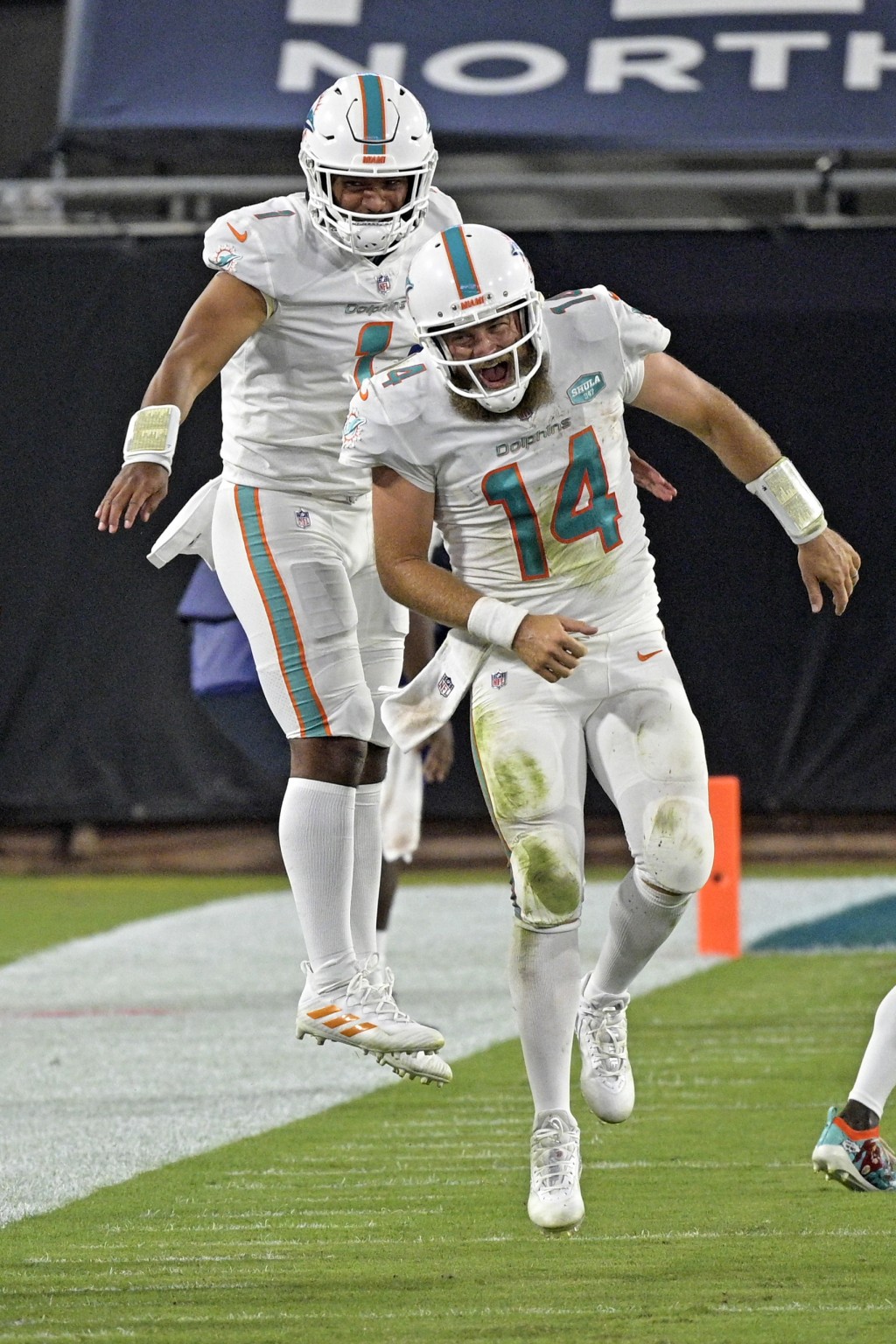 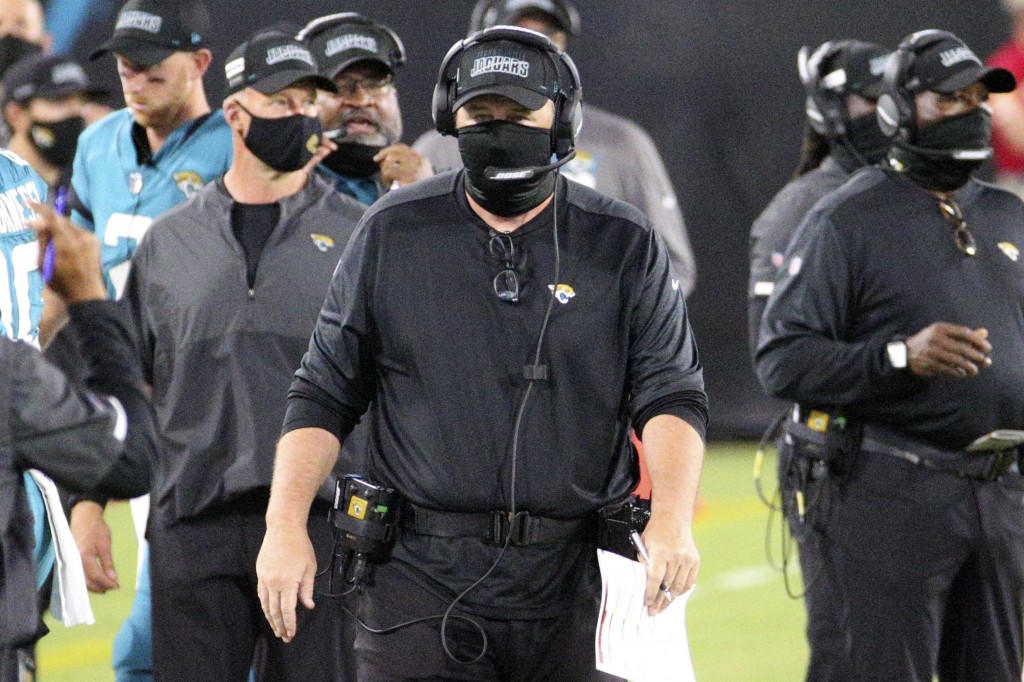 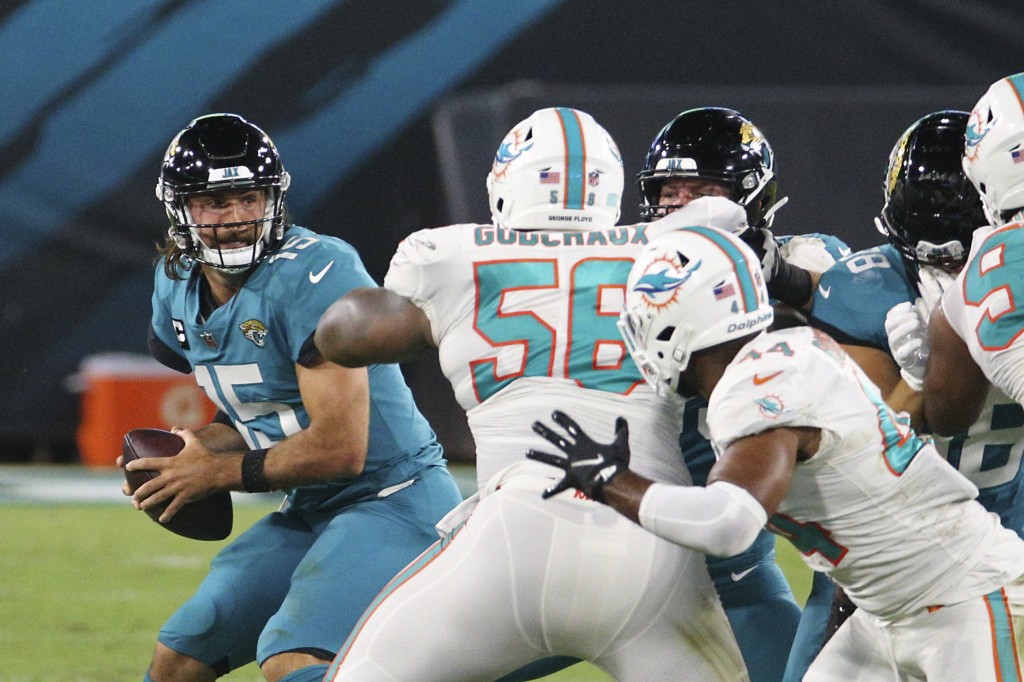 Fitzpatrick accounted for three touchdowns and led Miami to a 31-13 victory Thursday night, becoming the first NFL quarterback to notch six wins over the same opponent with six teams.

The lopsided outcome also gave the Dolphins (1-2) their first double-digit victory in 39 games, ending the longest drought in the league.

Fitzpatrick completed his first 12 passes — a career high — as Miami scored touchdowns on its first three drives for the first time since 2011. He ended the night celebrating another victory over the Jaguars (1-2).

Fitzpatrick also ran for 39 yards and a score, his 37-year-old legs looking as fresh as any in Miami’s backfield.

He completed 18 of 20 passes — the last one to himself — for 160 yards and two touchdowns in his latest successful outing against the Jags, who made countless mistakes while failing to consistently move the chains and get off the field on third down.

In short, they looked exactly like the team most outsiders expected them to be this season.

—Chris Conley dropped two passes that would have been first downs and was flagged for offensive pass interference in the third quarter. Gardner Minshew fumbled on the next play, leading to Miami’s fourth touchdown of the night.

—Minshew audibled to a pitch to the short side of the field on a third-and-5 play. He was sacked on the next play, ending a shot at making the game close at halftime.

—Rookie cornerback CJ Henderson was on the wrong end of one of four pass interference calls against Jacksonville. He also failed to touch receiver Jakeem Grant down after Grant made a diving catch. Henderson clapped his hands as Grant jumped up and gained an extra 10 yards.

Adding injury to insult, the Jaguars may have lost linebacker Leon Jacobs for the season. Jacobs was carted off the field on the opening drive with a right knee injury.

Fitzpatrick was already in control by then. He scored a few plays later as Jacksonville allowed a touchdown on the game's opening drive for the third straight week.

Fitzpatrick had TD passes to Preston Williams and Mike Gesicki — his best throw of the night — in the first half and ran for a score in the third.

Everything went so well for Fitzpatrick that even a pass batted down at the line of scrimmage in the fourth bounced right into his arms for a reception.

Rookie running back James Robinson was one of Jacksonville's few bright spots. He ran 11 times for 46 yards and two touchdowns and had six receptions for 83 yards.

Wright, an undrafted rookie from Georgia State, was called up from Jacksonville’s practice squad this week to replace Josh Lambo, who was placed on injured reserve with a hip injury.

Wright missed one of his two extra point attempts. He also injured a groin in the fourth quarter.

Jaguars safety Andrew Wingard was ruled out at halftime with a core muscle injury. He was filling in for starter Jarrod Wilson, who was placed on injured reserve after the opener. … Jaguars receiver DJ Chark (chest/back) was ruled out about six hours before kickoff. The team chose to be cautious with the 2019 Pro Bowl selection. He’s expected back at practice next week. ... The Dolphins were without No. 1 cornerback Byron Jones (groin/Achilles tendon).

Both teams remained in their locker room for the national anthem, continuing their push for social and racial justice.

Miami hosts Seattle on Oct. 4. The Dolphins have won five of the last seven meetings, including three straight in South Florida.

Jacksonville plays at Cincinnati on Oct. 4. The Jaguars have won two in a row against the Bengals, notching victories in 2017 and 2019.