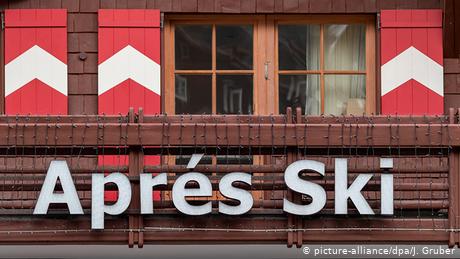 Austria's Sebastian Kurz announced new anti-coronavirus measures ahead of the next skiing season on Thursday, including a 10 p.m. curfew in the tourist states of Tirol, Vorarlberg and Salzburg. Kurz pointed out that skiing, shopping, dining, wellness and culture events would still be available despite the pandemic.

However, visitors would not be able to take part in the popular apres-ski parties, which involve dancing, drinking, and socializing after the skiing is done.

"For all fans of winter sports, the message is clear — yes to enjoying skiing, but no apres-ski," Kurz said.

Fears of a lockdown

The center-right leader warned of rising infection numbers in the European country. The latest data indicated over 830 daily infections, with over half of those reported in Vienna.

Tourism Minister Elisabeth Köstinger warned that groups of people dancing and singing in close quarters or under small parasols could turn into an "infection hotspot."

In addition to the curfew and the "après-ski" ban, the authorities plan to impose mandatory face covering for people riding the ski-lift. Passengers would also be required to maintain distance while boarding the transport. Additionally, patrons at bars and restaurants would only be able to consume food and drinks while sitting down, to reduce crowding.

Tourism is a key source of income for Austria, filling over 15% of the nation's GDP. On Thursday, Kurz described it as a part of "our identity."

However, the branch took a heavy blow due to the March outbreak in Ischgl, in the west of the country. Over a 1,000 people who claim to have caught the virus in the alpine ski resort are now suing the government over its handling of the outbreak.

In June, results of a study by the Medical University of Innsbruck showed that some 42.4% of tested Ischgl residents had coronavirus anti-bodies.