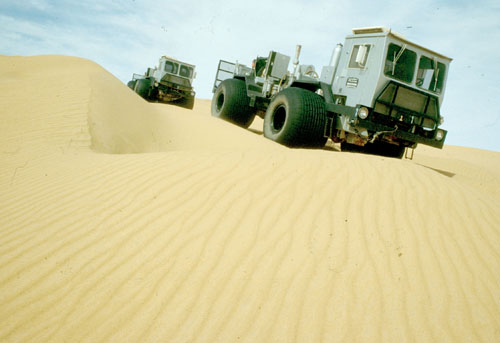 After 20 years of isolation, Libya has become the destination of choice for hungry oil companies ready to cut any kind of deal to get a piece of the north African state's oil riches.
"It's a race for our black gold," president of the National Oil Company Shukri Ghanem told AFP. "We are organizing it like the Olympic Games and may the best one win."
With each subsequent round of concessions, companies from all over the world have been undercutting each other's bids to the barest limits of profitability.
With the end of UN sanctions after Libyan leader Moamer Kadhafi dramatic decision in December 2003 to abandon weapons of mass destruction programs, oil exploration has picked up from its long hiatus at a frenetic pace.
OPEC member Libya is Africa's second largest oil producer with 1.6 million barrels of oil per day. Its reserves are estimated at 42 billion barrels of high quality crude which could rise to Kuwait-like levels of 100 billion with new explorations.
"Libya is one of those rare countries that has huge exploration zones of practically virgin territory, but some companies are rushing into them on terms that are only barely economically feasible," noted Philippe Malzac, head of French oil company Total in Libya.
In 2005, for the first time in four decades, foreign oil companies won concessions to explore with a symbolically strong showing by US companies like Chevron-Texaco and Occidental Petroleum.
In the second round of bidding, however, Asian companies were at the vanguard, taking 10 of the 19 licenses up for grabs, with French Total also taking a major block itself.
Ghanem, a former prime minister and widely considered a leader of the "reformists" in the country, will soon be wrapping up the third round of bidding on concessions.
"In two years, more than 40 companies from the entire world will have received permits" for five years of exploration, extendable to another 20-25 years exploitation in case of a discovery.
"The United States, Britain, Italy, France Russia, China, Taiwan, India, Algeria, Indonesia, Spain and even Canada," he said, listing the countries like prizes in a contest.
More important for him than just the origins of these companies, however, is the consistent improvement of the production-sharing agreements for Libya with each round of bidding.
"In the third round, some countries accepted only seven percent for themselves, leaving 93 percent for us, which is very good for us," said Ghanem. "It must also be good for the companies since they submitted the offer."
While the agreements began with an average share of 25 percent for the companies, in the third round Chinese Petroleum offered to take only 7.8 percent, while Russia's Gazprom and Tatneft dropped to 10 percent.
"Taking into account the risks and the rise in cost of investments, the companies submitting such offers are not functioning solely on economic criteria - it's disturbing," said a Western oil man who preferred to remain anonymous.
For him and many other representatives of the Western companies, these kinds of deals smack of "dumping" on the part of the energy-hungry Chinese, Indians and Russians.
American giant Exxon is sitting pretty with a massive offshore concession of 10,000 square kilometers in the Sirte basin, along 160 kilometers of coastline, which it obtained without competition.
Oil makes up 95 percent of Libya's exports - with 40 percent of it going straight to Italy - and 70 percent of its GDP. The country is hoping to return to its pre-embargo production rate of three million barrels per day.
Experts are doubtful, however, that given the current state of Libya's oil infrastructure even the first stage target of two million bpd by 2010 is reachable.
"Decrepit infrastructure and a massive bureaucracy are not going to help in achieving this objective," said one.
Nor will foreign oil firms' negotiating positions get any easier, with Kadhafi warning in a speech on Thursday that Western oil firms were after more than was currently on offer.
"You must watch out for colonial forces which spy on us and aim to steal our riches," he said. "These American and Western oil firms, which take no more than 20 percent (in production) are seeking to reverse the situation."
"The colonialist should be aware that he will not realize his aims in Libya."