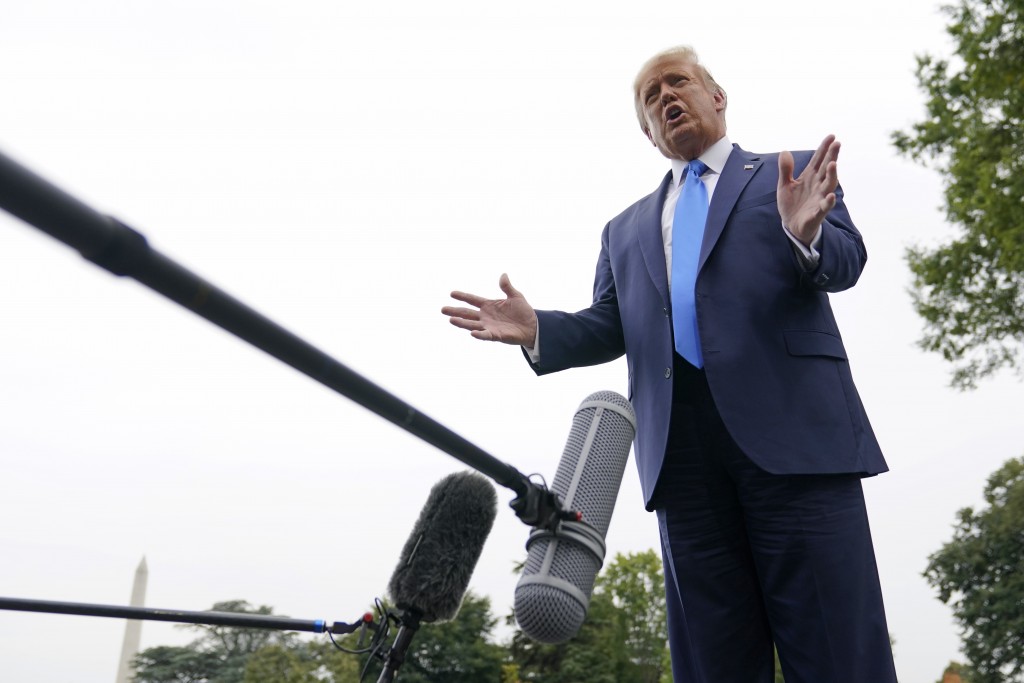 WASHINGTON (AP) — President Donald Trump plans to sign an executive order on preexisting medical conditions Thursday, amid a global pandemic and growing uncertainty about the future of protections guaranteed by the Obama-era health law his administration is still trying to overturn.

In a visit to swing state North Carolina, the president will sketch out what aides call a “vision” for quality health care at affordable prices, with lower prescription drug costs, more consumer choice and greater transparency. Aside from protecting people with preexisting conditions, he'll sign another executive order to try to end surprise medical bills.

But while the Trump administration has made some progress on its health care goals, the sweeping changes he promised as a candidate in 2016 have eluded him. Democrats are warning Trump would turn back the clock if given another four years in the White House, and they're promising coverage for all and lower drug prices.

The clock has all but run out in Congress for major legislation on lowering drug costs or ending surprise bills, much less replacing the Affordable Care Act, or “Obamacare.”

Bill-signing ceremonies on prescription drugs and medical charges were once seen as achievable goals for Trump before the election. No longer.

Health and Human Services Secretary Alex Azar said one of Trump's executive orders would declare it the policy of the U.S. government to protect people with preexisting conditions, even if the ACA is declared unconstitutional. However, such protections are already the law, and Trump would have to go to Congress to cement a new policy.

On surprise billing, Azar said the president's order will direct him to work with Congress on legislation, and if there's no progress, move ahead with regulatory action. However, despite widespread support among lawmakers for ending surprise bills, the administration has been unable to forge a compromise that steers around determined lobbying by a slew of interest groups affected.

“So, after 20 years of national public policy debate and hard-fought congressional and presidential approval, how does Trump conclude he can restore these protections, should the Republican Supreme Court suit overturn them, with a simple executive order?”

Prescription drug inflation has stabilized when generics are factored in, but the dramatic price rollbacks he once teased have not materialized.

And the number of uninsured Americans had started edging up even before job losses in the economic shutdown to try to contain the coronavirus pandemic. Various studies have tried to estimate the additional coverage losses this year, but the most authoritative government statistics have a long time lag. Larry Levitt of the nonpartisan Kaiser Family Foundation says his best guess is “several million.”

Meanwhile, Trump is pressing the Supreme Court to invalidate the entire Obama health law, which provides coverage to more than 20 million people and protects Americans with medical problems from insurance discrimination. The case will be argued a week after Election Day.

The death of Supreme Court Justice Ruth Bader Ginsburg has added another layer of uncertainty. Without Ginsburg, there's no longer a majority of five justices who previously had voted to uphold the ACA.

Democrats, unable to slow the Republican march to Senate confirmation of a replacement for Ginsburg, are ramping up their election-year health care messaging. It's a strategy that helped them win the House in 2018. Former Vice President Joe Biden has said he wants to expand the Obama law, and add a new public program as an option.

A recent Kaiser Foundation poll found Biden had an edge over Trump among registered voters as the candidate with the better approach on making sure everyone has access to health care and insurance, 52% to 40%. The gap narrowed for lowering costs of health care: 48% named Biden, while 42% picked Trump.

Trump was unveiling his agenda in Charlotte, ahead of a two-day swing to several battleground states, including the all-important Florida. There, he will hold a rally in Jacksonville and later court Latino voters at a roundtable in Doral on Friday. Then he'll fly to Atlanta, Georgia, to deliver a speech on black economic empowerment. He’ll end the day with another rally in Newport News, Virginia.

The scramble to deliver concrete accomplishments on health care comes as Trump is chafing under criticism that he never created a Republican alternative to Obamacare with 40 days to go before the election.

Trump has repeatedly insisted his plan is coming.

“We’re signing a health care plan within two weeks,” Trump claimed in a July 19 interview. He told reporters in August that it would be introduced “hopefully, prior to the end of the month.”

During a televised town hall earlier this month in Pennsylvania, Trump again insisted he had a plan — but refused to share its details or explain why he’d waited more than 3 1/2 years to unveil it.

“I have it all ready, and it’s a much better plan for you,” he said.