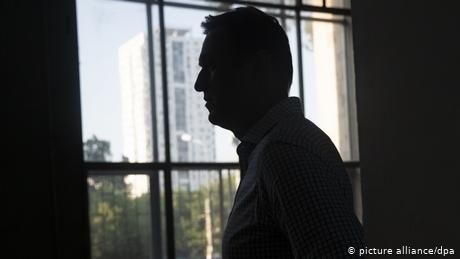 Russian bailiffs also placed an "arrest order" on Navalny's home, meaning his Moscow flat "cannot be sold, donated, or mortgaged," according to Yarmush.

She said the freeze was linked with a legal battle between Navalny, his aides, and a company providing food for Moscow pupils and kindergarteners. In 2018, Navalny's Foundation for Fighting Corruption (FBK) blamed the "Moscow schoolchild" company for a breakout of dysentery in schools and kindergartens. They also named businessman Yevgeny Prigozhin, who has ties to Russian President Vladimir Putin, as the owner of the catering service.

Prigozhin aides denied his ownership of "Moscow schoolchild." Meanwhile, the company sued Navalny and his allies for libel and won, with a Russian court ordering Navalny, the FBK and Navalny's associate Lyubov Sobol to pay out some $1.14 million (nearly €1 million) in damages.

Around four weeks ago, days after Navalny was poisoned, Russian media reported that Prigozhin made a deal with "Moscow schoolchild" to have the debt pass on to him personally. On August 27, while Navalny was still in artificial coma, the bailiffs imposed the freeze on the activist's property, Yarmush said.

Navalny has since awoken from the medically-induced coma and is expected to return to Russia and continue his political activism.

The blogger's latest health crisis comes just over a year after he fell ill while in detention, in what the Russian doctors described as an allergic reaction. The 44-year-old claimed he was poisoned. Previously, Navalny suffered chemical burns and partially lost sight in his right eye when an antiseptic was thrown in his face in 2017.