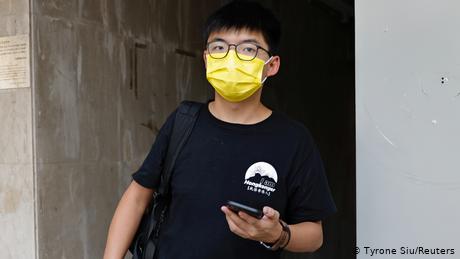 Hong Kong pro-democracy activist Joshua Wong was arrested Thursday for "unlawful assembly" related to a 2019 protest against a government ban on face masks, according to a post on his official Twitter account. He was later released after three hours in detention.

The post said that Wong was also being held for violating the anti-mask law — a ban on wearing face masks in public places, which has since been ruled unconstitutional.

"The arrest is related to participating in an unauthorized assembly on 5Oct last year. He is told to have violated the draconian anti-mask law as well," Wong's account said.

The 23-year-old activist was arrested when he reported to a police station regarding another case against him, for which he is currently on trial. His arrest adds to several unlawful assembly charges or suspected offenses that he and other activists are facing related to last year's pro-democracy protests.

Upon his release, Wong tweeted, "Today's arrest is a notorious abuse to the criminal justice system by placing charges ruled unconstitutional earlier. However, I choose not to surrender."

A fellow member of his group, Koo Sze Yiu, was also arrested and later released on bail.

"Sources told me that Joshua Wong is not the only one caught today," tweeted DW's East Asia correspondent, Phoebe Kong. "Veteran activist Koo Sze Yiu from League of Social Democrats has also been arrested for participating in unauthorized assembly on 5th Oct 2019."

"It’s another outrageous attempt to silence the voice of the freedom fighters in Hong Kong, especially someone who has a leading role like Joshua," pro-democracy activist Nathan Law, who is currently in London, told DW. "The world must condemn these arbitrary arrests and continue to keep an eye on the deterioration of freedom in Hong Kong."

The Hong Kong government invoked a colonial-era emergency law on Oct. 4 of last year to ban the wearing of masks at demonstrations, sparking an outcry and mass protests against the ban across the city the next day.

The arrest comes just a day after a Hong Kong court rejected on procedural grounds a challenge by Wong to his disqualification from district elections in the city last year.

Wong was the only candidate in the district council elections to be disqualified, with authorities saying his candidacy violated electoral laws that bar "advocating or promoting self-determination" for the former British colony.

Huge demonstrations broke out in Hong Kong in June 2019 in response to a bill that would allow for the extradition of dissidents to mainland China to face trial there. Last month, China introduced a sweeping national security law which bans subversion, secession, terrorism and collusion with foreign forces.

Critics fear that the law will be used to more broadly quash dissent within the semi-autonomous city. Wong's long-time colleague, Agnes Chow, and two other activists were also among 10 people police arrested in August on suspicion of violating the new law.