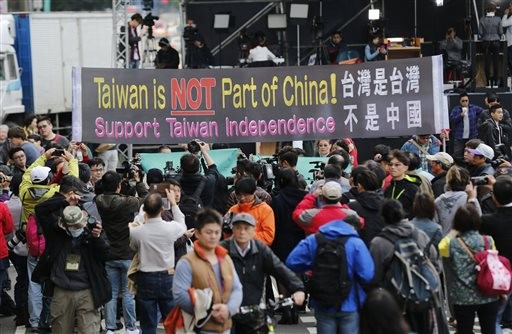 TAIPEI (Taiwan News) — As hostile actions by China against Taiwan continue to intensify, the latest poll by Taiwan Thinktank (台灣智庫) found that only 2 percent of respondents consider themselves "Chinese," while over 80 percent support the country's participation in international organizations under the name "Taiwan."

In a press conference pushing constitutional reform on Thursday (Sept. 24), titled "Promoting the Normalization of the Country," Taiwan Thinktank Deputy Chief Executive Doong Sy-chi (董思齊) said that when survey participants were asked to state the nationality they identify with, 62.6 percent said they are "Taiwanese," 2.0 percent said they are "Chinese," and 32.6 percent said "both." Among those who chose "both," when asked to choose only one nationality, 86 percent chose "Taiwanese"; 6.3 percent selected "Chinese," and 1.1 percent repeated "both."

The results of the poll also showed that 80.5 percent support Taiwan's participation in international organizations and events under the name "Taiwan," while only 12 percent are opposed. When asked what name Taiwan should use when engaging in foreign affairs, 51.2 percent answered "Taiwan," 33.0 percent responded "Republic of China," 9.7 percent opted for "Chinese Taipei," 2 percent favored "Taiwan, Penghu, Kinmen, and other areas," 0.1 percent chose "other," 2.9 percent had no opinion, 0.5 percent refused to answer, and only 0.6 percent selected "Taipei, China."

Doong pointed out that in the process of democratization, Taiwan has undergone three transfers of party control and held multiple democratic elections, which have gradually shaped Taiwan’s national identity. In addition, China’s recent continuous verbal threats and military provocations against Taiwan have led to a sharp drop in the proportion of those who identify with China while developing a consensus among the people on Taiwan's status.

He then stated the results of the survey reflect two major consensuses in Taiwanese society: the "Taiwan Consensus" and the "Generation Consensus." As for the former, Doong said that Taiwan "as the main body" has become the consensus among the people; regarding the latter, those under the age of 30 have a high degree of collective consensus compared to other age groups.

The poll had a confidence level of 95 percent, and the sampling error was plus or minus 3 percentage points.