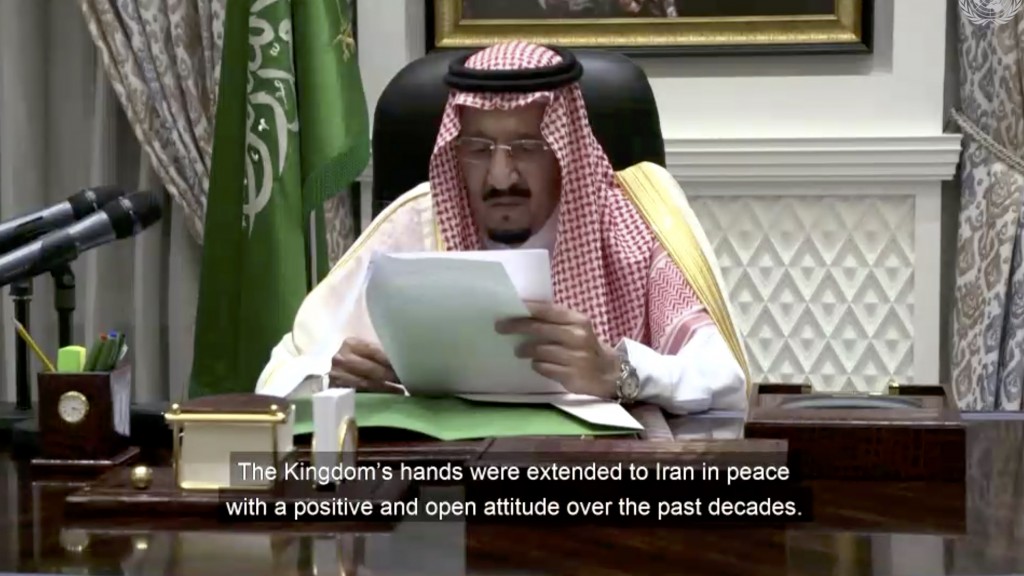 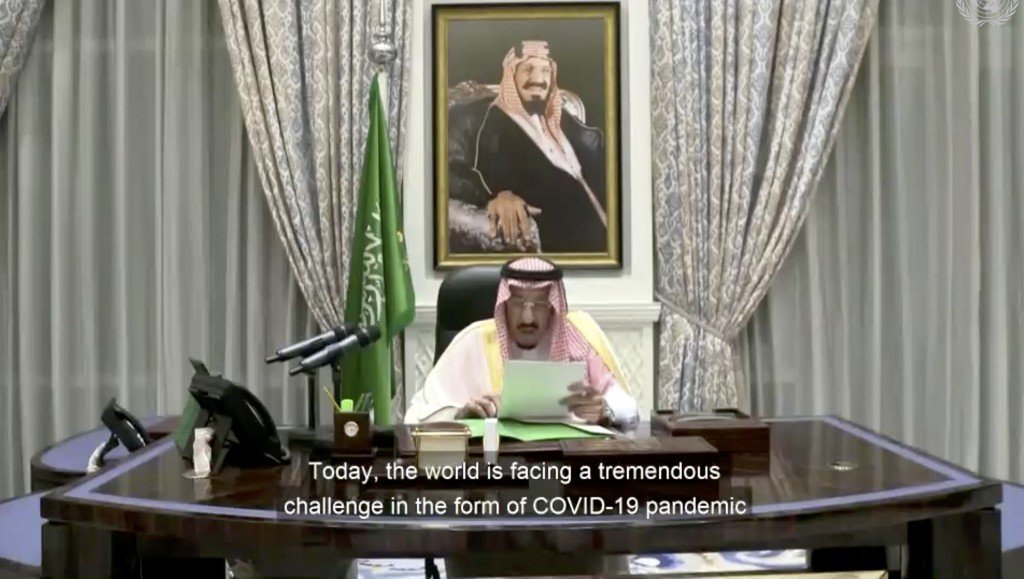 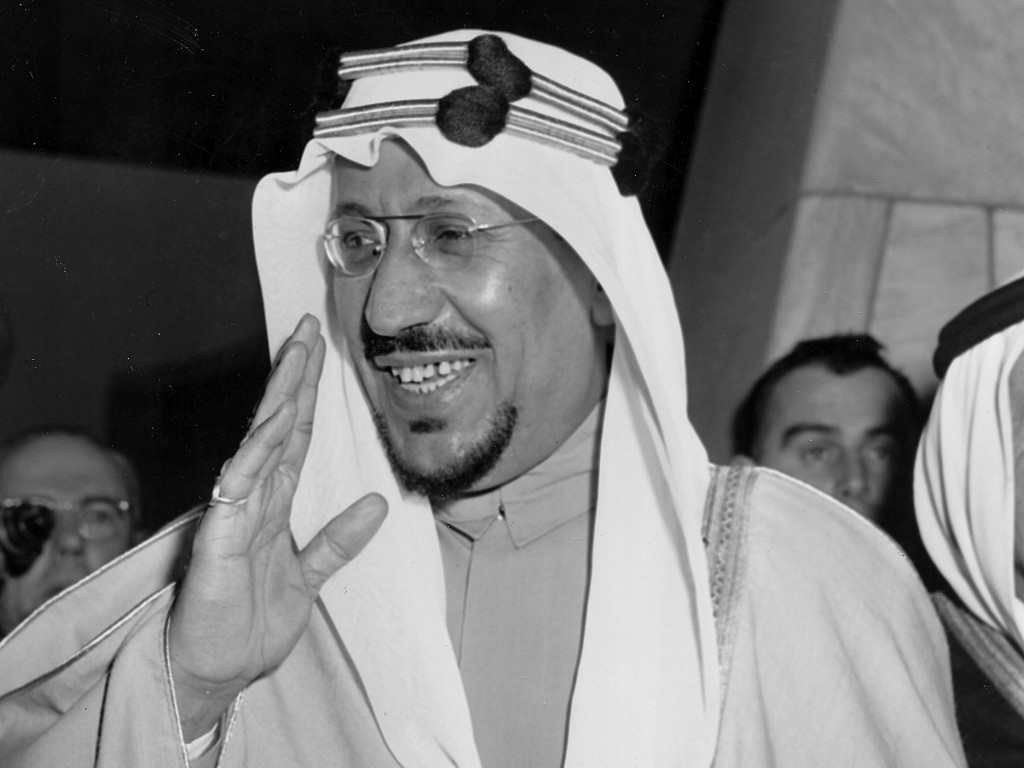 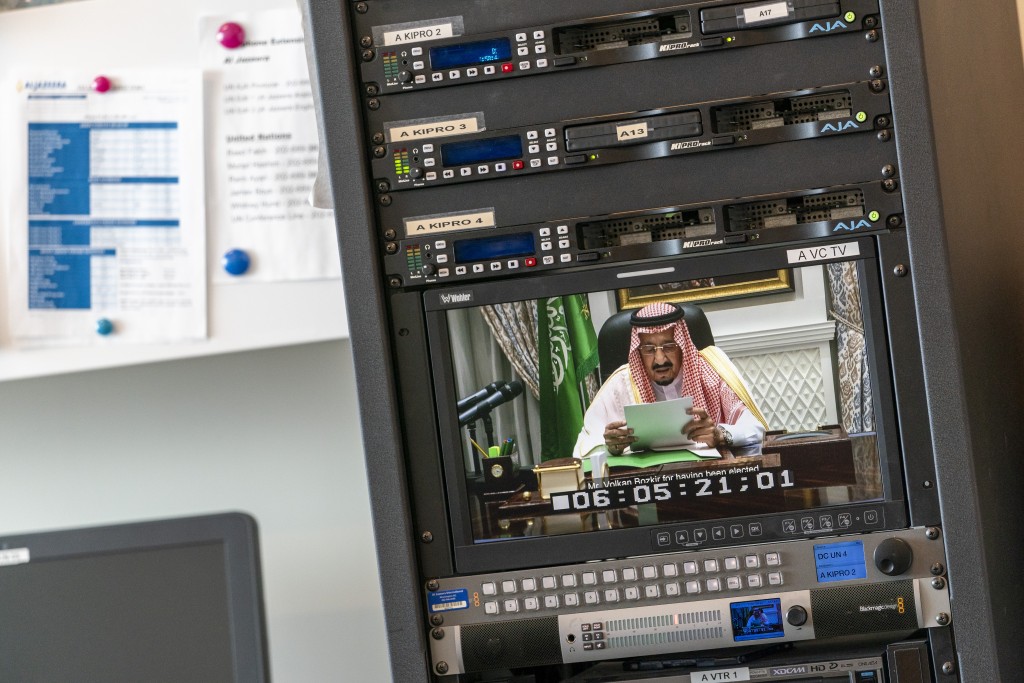 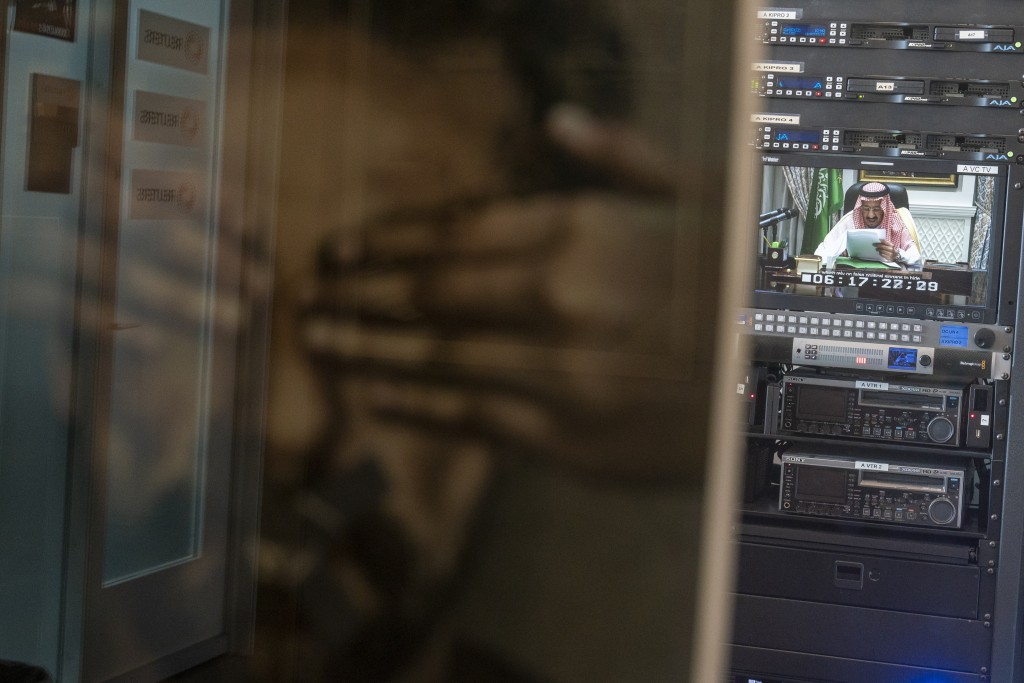 DUBAI, United Arab Emirates (AP) — Saudi Arabia’s King Salman made a rare address to the U.N. General Assembly on Wednesday, using the moment to highlight the foundational notions of his regime — his steadfast commitment to the Palestinians, his stature as custodian of Islam’s holiest sites and his assertion that Iran is responsible for much of the region’s instability.

The prerecorded speech to world leaders suggested that the 84-year-old king, who delivers only a handful of public remarks each year, retains oversight of high-level policies despite the immense powers amassed by his son, the crown prince.

In delivering his remarks, he became only the second Saudi king to deliver a speech to the world assembly. The first was his late brother, King Saud, in 1957 at U.N. headquarters in New York. And like his brother's speech 63 years prior, King Salman noted the sacred role of Islam in Saudi Arabia and the importance that entails.

“We in the kingdom, due to our position in the Muslim world, bear a special and historic responsibility to protect our tolerant Islamic faith from attempts by terrorist organizations and extremist groups to pervert it,” Salman said.

He emphasized at the top of his speech that he was speaking from “the birthplace of Islam, the home of its revelation” — a reference to the Muslim belief that the word of God was revealed to the Prophet Muhammad some 1,400 years ago in the mountainous caves of Mecca.

Those words carry political undertones as well. Saudi rivals Turkey and Iran also profess to champion Muslim causes worldwide as part of a broader struggle for leadership of Muslims globally.

The king oversees a nation that is the Arab world's biggest economy and the planet's most prolific oil producer. Saudi Arabia has long been a close U.S. ally in the region and a strategic partner, though some in American politics worry where the relationship will go in coming years given the unpredictability of the brash Crown Prince Mohammed bin Salman.

Reading from a piece of paper and seated at a desk under a large portrait of his father, King Abdulaziz, the current monarch reiterated his support for Palestinian statehood as a prerequisite for recognition of Israel.

He said the Arab Peace Initiative, which offers Israel full ties with Arab states in exchange for concessions that lead to a Palestinian state, provides a basis for resolving the region's longest-running conflict. That 2002 initiative stands in stark contrast to the White House's Middle East Peace plan, which has been rejected outright by the Palestinians as one-sided in favor of Israel.

The king made no mention of recent deals struck by neighboring United Arab Emirates and Bahrain to formalize ties with Israel. The agreements were brokered by the Trump administration and branded by the Palestinians as acts of betrayal.

Despite the appearance Wednesday that Salman was in control of major policies, there are indications that change is already underway with Israel under the guidance of the crown prince. The divergent messages on the possibility of Saudi ties with Israel reflect what analysts call a generational divide between the world views of the prince and the king.

Salman hails from an era of leadership that holds with high regard the ideals of pan-Arab and pan-Islamic multilateralism. He was born just four years after his father founded the country by unifying tribes and establishing control over the western Hijaz region, where Mecca is located. He also witnessed the country's oil-fueled transformation, and as the governor of Riyadh helped to turn the desert capital into a city teeming with skyscrapers, highways, universities and malls. His reign marks the final chapter of power being passed from brother to brother from among the sons of King Abdelaziz as a new generation prepares for the throne.

The crown prince, on the other hand, reflects a cohort of younger Gulf Arab rulers whose policies prioritize national interests and greater self-reliance. He's pushed for localizing the production of defense equipment, transforming the economy to be less dependent on oil exports and overseen efforts to supplant a religiously conservative Saudi identity with one rooted in hyper-nationalism.

King Salman has backed his son by elevating him from near obscurity and handing him day-to-day decision making powers. He's stood by him amid the protracted Yemen war, international fallout from the killing of Saudi critic Jamal Khashoggi in 2018 and as Prince Mohammed moved to crackdown on dissidents, businessmen and sideline more experienced and senior royals in the line of succession.

It's unclear how much the king knows about controversies, such as the November 2017 debacle with then-Lebanese Prime Minister Saad Hariri, whom top Lebanese officials at the time said had been forced to resign and was being held in Saudi Arabia against his will before France's president personally intervened.

What was clear as Salman spoke Wednesday, though, was that his nation's views on nearby Iran remained unwavering. He blamed Iran for targeting Saudi oil facilities with missiles and drones last year, saying: “It demonstrated that this regime has total disregard for the stability of the global economy or stability of oil supplies to international markets.”

Yemeni rebel Houthis claimed responsibility for that attack and Iran has denied involvement. A U.N. probe concluded the missiles were of Iranian origin. The king said Iran interfered in Yemen by backing the Houthis when they ousted the internationally-backed government from the capital in late 2014, prompting the Saudi-led war there.

Salman said Saudi Arabia has tried to extend its hand over the years to Iran, “but to no avail.”

For observers of the kingdom with no access to the inner workings of the royal court, the U.N. speech was Salman’s first public statement before cameras since he was discharged from the hospital for gall bladder surgery in late July.