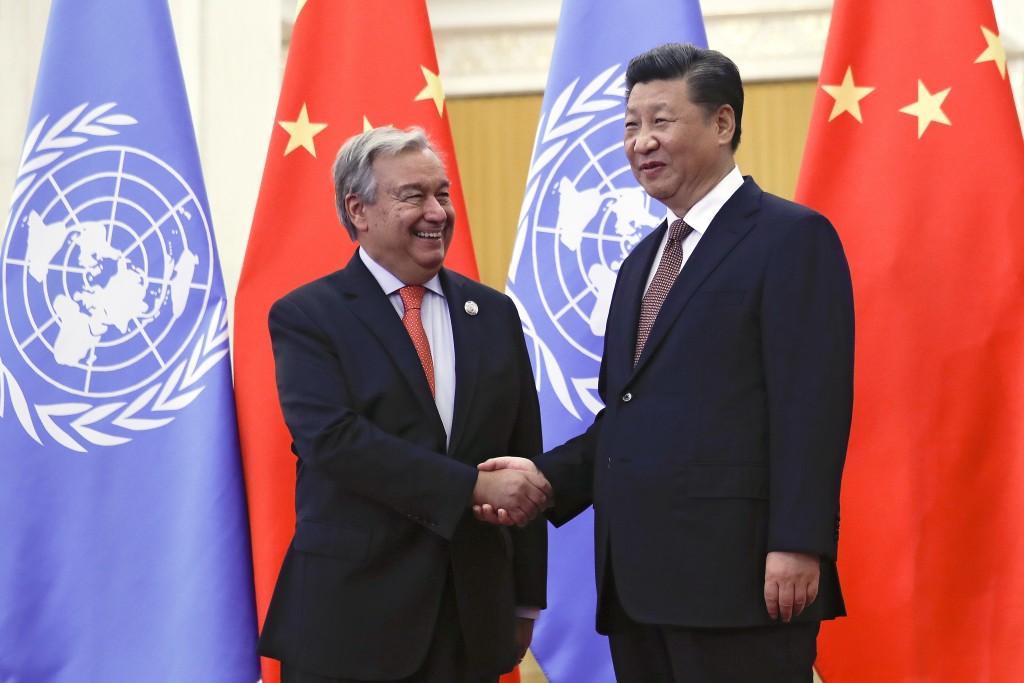 TOKYO (AP) — The descriptions that China’s state media rolled out ahead of leader Xi Jinping’s speech Tuesday at the annual gathering of world leaders at the United Nations were hardly unexpected.

The Xinhua news agency lauded him as as a “champion of the U.N. ethos,” and commentaries laid out his expectations and plans as he prepared for virtual meetings with his colleagues at the U.N. General Assembly.

All of the propaganda was peppered with assertions of China’s long history as a paragon of world cooperation, and of Xi as a leading voice of reason on the international stage.

But scattered clues suggest some unease as China looks to manage its staggering — and staggeringly complex — military, economic and political rise while confronting the aggressive containment strategies of the world’s current superpower, the United States, and its friends and allies.

“Xi Jinping has his work cut out for him at the General Assembly,” said Mike Mazza, a China analyst at the American Enterprise Institute in Washington. He pointed to tensions with Europe over trade and investment, climate and human rights, in addition to the Trump administration’s more consistently confrontational approach to China.

Xi has failed to leverage ill feelings between many European leaders and U.S. President Donald Trump, while a potential detente with Japan has stalled. Relations with Australia have nosedived over allegations of spying and political manipulation and calls for an investigation into the Chinese origins of the coronavirus outbreak, Mazza said.

Despite distancing itself from Washington in favor of Beijing in recent years, the Philippines recently backed away from a threat to cancel a key military pact with the United States, another setback to Beijing’s push to dominate the region.

These troubles are, “by and large, problems of its own making,” Mazza said of China.

As aggressive as Beijing can seem to its neighbors when using its fast-expanding military and powerful economy to carve out what it sees as its natural sphere of influence in Asia, this is a fragile moment in what's often seen as China's inevitable rise as a superpower.

Beijing has faced criticism over the continuing fallout from the coronavirus pandemic, which originated in China late last year. Some say Beijing initially attempted to cover up the outbreak before seeking to take advantage of its response for public relations ends.

There's outrage over China's severe restriction of civil rights in Hong Kong following its imposition on the semi-autonomous city of a sweeping national security law, and over widespread accusations of mass detentions and cultural genocide against Muslims in the Xinjiang region. And there's wariness also over China's rising pressure and military threats against Taiwan, the self-governing island democracy that Beijing claims as its own territory.

Meanwhile, China’s moves to claim nearly the entire South China Sea have led to friction with the United States and with Beijing’s neighbors to the south, while a decades-long border dispute with India erupted this year into deadly brawling between the rivals' troops and the firing of shots for the first time in decades.

All this has undercut arguments that favor engagement with China as a trade war between Beijing, the world’s second-biggest economy, and Washington, the biggest, continues to simmer.

“Xi will find a very mixed international environment when he addresses the UNGA. Most of the democracies which had previously been very supportive of China’s modernization and development are getting uncomfortable with how Xi is steering the rise of China," said Steve Tsang, director of the China Institute at London’s School of Oriental and African Studies.

Xi, in prepared remarks released before a meeting to commemorate the 75th U.N. anniversary, took veiled but unmistakable aim at Washington.

“No country has the right to dominate global affairs, control the destiny of others, or keep advantages in development all to itself,” Xi said. “Even less should one be allowed to do whatever it likes and be the hegemon, bully or boss of the world. Unilateralism is a dead end."

This could just as easily be describing China’s Asian neighbors' feelings at what many see as Beijing's aggressive foreign policy.

“Beijing is incapable of acknowledging that its own actions may have been at the root of various problems so, to the extent problems are acknowledged, the source will always be someone else," said Ralph Cossa, president emeritus of the Pacific Forum think tank in Hawaii.

The United States and China are now “locked on a collision course that could potentially result in dangerous military conflict,” said Brookings Institution China analyst Cheng Li. An immediate goal of Xi’s will be to “showcase how China has stepped up to the plate to call for multilateralism and address global concerns — from economic reopening and pandemic relief to climate change and international peace-keeping — while the United States has increasingly left a gaping void in global leadership.”

While many in the world have mixed feelings about China's rise, others will see it as a model of COVID-19 recovery and assistance — in “glaring contrast” to the United States, said Brantley Womack of the University of Virginia’s Miller Center.

Xi will also likely be appreciated at the U.N. by countries looking for investment and debt relief under China’s massive Belt and Road infrastructure initiative and by states such as Russia.

“Just as the global financial crisis in 2008 set the stage for China’s entrance as a global economic power, the COVID crisis provides a new spotlight for China as a global political power,” Womack said. “In both cases, China’s presence is acknowledged but not necessarily welcome, and China’s diplomatic challenge is to put its best face forward.”

Foster Klug, AP's news director for the Koreas, Japan, Australia and the South Pacific, has covered Asia at the annual UNGA meetings since 2005. Follow him on Twitter at www.twitter.com/apklug