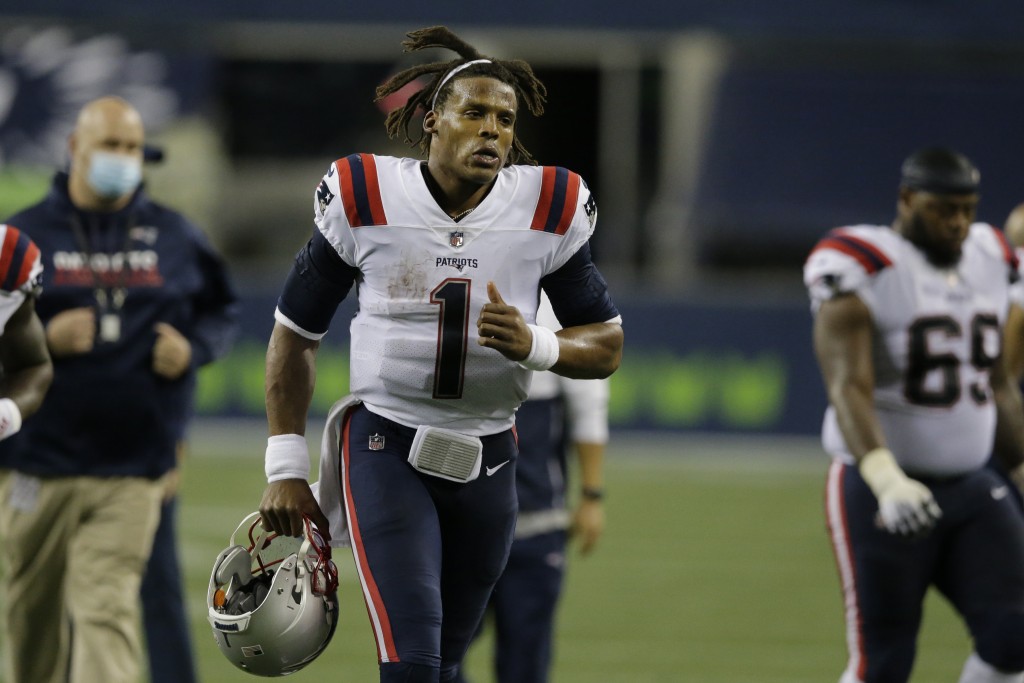 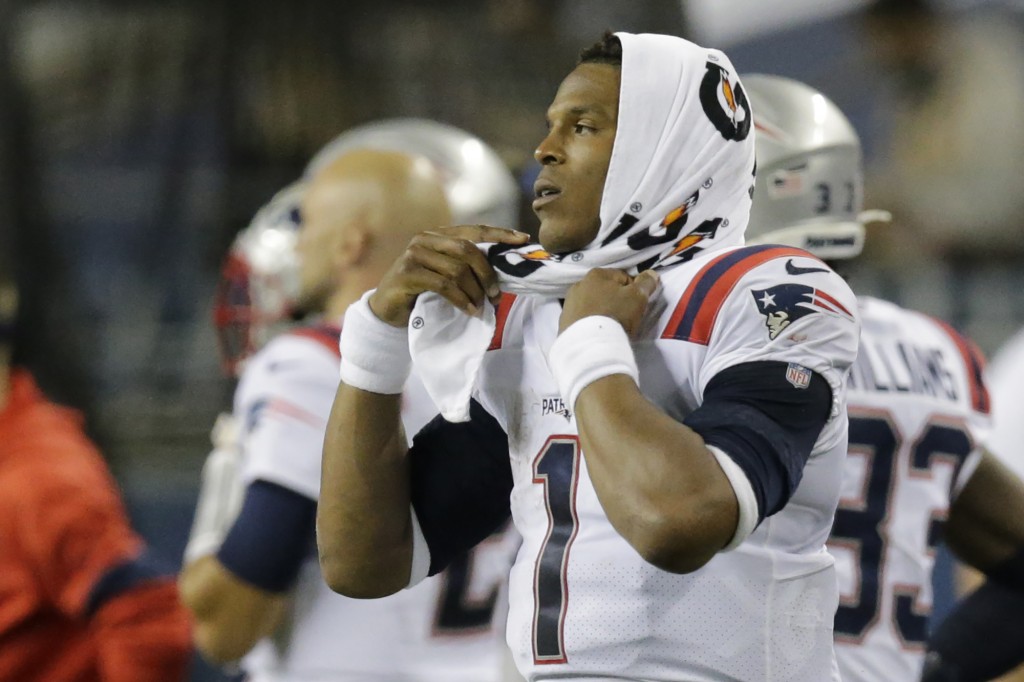 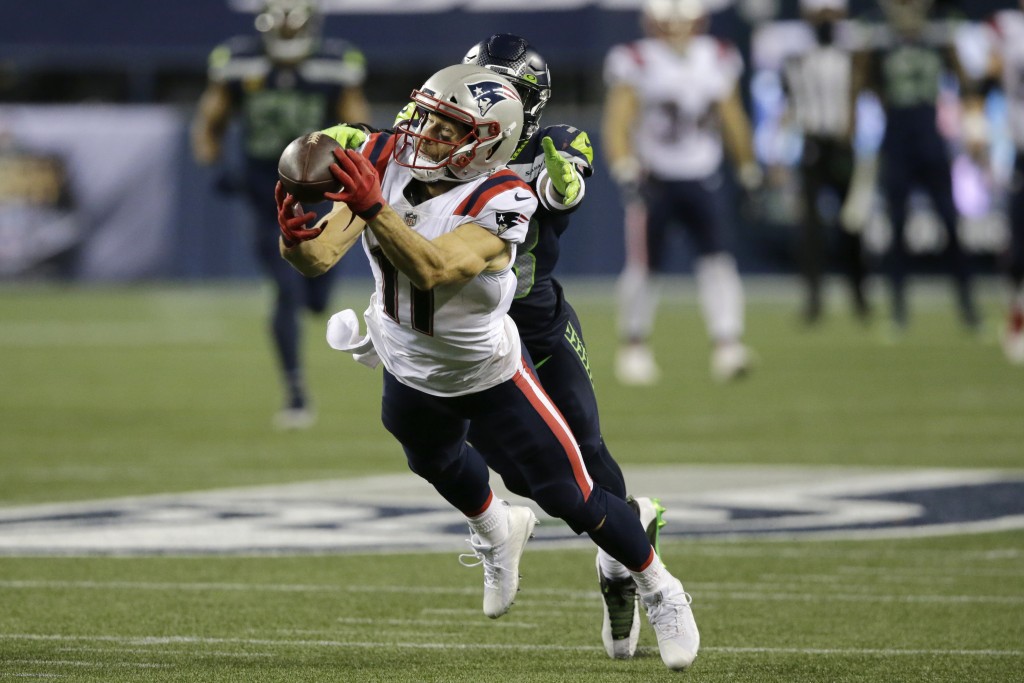 FOXBOROUGH, Mass. (AP) — The Patriots left Sunday’s 35-30 loss at Seattle lamenting the yard they didn’t get.

But they exited with increased confidence in both the progress they’re making on offense and the versatility of the quarterback leading it.

Cam Newton did most of his damage with his legs in New England’s Week 1 win over Miami. He ran for two touchdowns against the Seahawks, but also showed he’s still more than capable of leading a team down the field with his arm — a question mark heading into the season.

He finished 30 of 44 through the air for 397 yards, the third-most passing yards of his career. He was particularly solid in the two-minute offense during the final drive to give New England a chance to win the game.

Those are all positive signs for a unit that, outside of Newton, is still trying to clean up some issues in the run game.

“It was something to build on, most definitely,” Newton said.

Despite not having a full offseason program to get acclimated to offensive coordinator Josh McDaniels’ system, Newton has managed to quickly build some chemistry with his new receivers. Like predecessor Tom Brady, one of Newton's favorite targets through two weeks has been Julian Edelman, who caught eight passes for a career-high 179 yards.

Newton said even with the success he's had, there is still room to improve.

“It’s early,” he said. “I’m just trying to continually get better. That’s all. For those guys to have faith in me, I just have to deliver.”

Another positive sign for the offense was that Newton completed passes to seven receivers.

In the Patriots’ season-opening win over Miami, he completed passes to just five receivers, with only Edelman and N'Keal Harry logging more than five targets. On Sunday Newton targeted Edelman, Harry and Damiere Byrd five or more times. Edelman and Harry had eight catches apiece. Byrd finished with six.

New England’s secondary was among the best in the NFL last season, allowing just four passing touchdowns, hauling in a league-high 25 interceptions and limiting teams to 180 passing yards per game.

But Seahawks quarterback Russell Wilson exploited some vulnerabilities, completing 21 of 28 passes for 288 yards and five touchdowns. Safety Devin McCourty did have a Pick-6 in the first quarter, though it came off a tipped ball.

Wilson also didn’t shy away from going at Patriots cornerback and reigning Defensive Player of the Year Stephon Gilmore. With Gilmore in coverage, Wilson completed a 54-yard TD to DK Metcalf in the second quarter. It was the first TD allowed by Gilmore as the primary defender since 2018.

“Russell Wilson is a great quarterback. He bought a lot of time and that’s what helped those guys out. He threw some great balls,” Gilmore said. “You just have to keep getting better, watch the film and keep competing.”

Harry bounced back after a rough season opener in which he had a fumble near the goal line. Harry had three catches for 42 yards on New England’s final drive Sunday, including a 12-yard reception to get to the 1. He finished with a career-high eight catches for 72 yards.

“He has grown in front of everyone’s eyes,” Newton said. “For him to gain confidence in himself, I think that’s a start. And I think that’s what he’s doing. I think (Sunday) was a great indication of that and what he could potentially be.”

K Nick Folk went 1 for 2 on field goals Sunday. He connected from 25 yards but missed a 51-yarder. He is now 1 for 3 on the season. Still his job seems safe for now.

4,928 — Newton's career rushing yards after running for 47 yards on Sunday. That ties him with Randall Cunningham for second place for the most rushing yards by a quarterback. Michael Vick is first with 6,109 yards.

The running back position will be in the spotlight this week, especially with James White’s availability in question following the passing of his father in a car accident. If he doesn’t play, it could mean more opportunities for undrafted rookie J.J. Taylor.