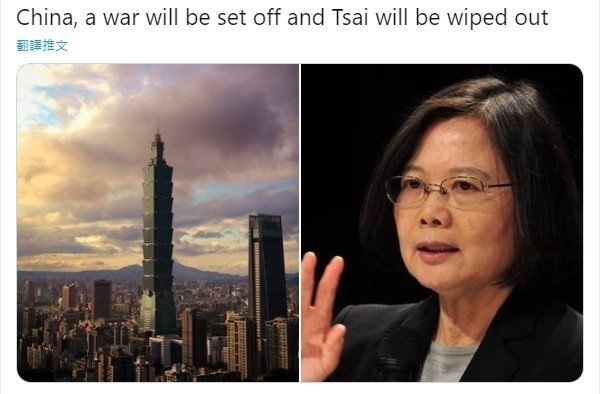 TAIPEI (Taiwan News) — In response to last week's visit to Taiwan by the highest-ranking U.S. State Department official in over 40 years, China's state-run media warned Taiwan's president that a violation of its Anti-Secession Law could lead to a war that would see her "wiped out."

From Sept. 17 to Sept. 19, U.S. Under Secretary of State for Economic Growth, Energy, and the Environment Keith Krach and his delegation visited Taiwan to attend the memorial service of late President Lee Teng-hui (李登輝), meeting with top officials, including President Tsai Ing-wen (蔡英文), during a dinner at the Official Residence on Sept. 18. His trip marked the highest-level visit by an American State Department official since the U.S. severed diplomatic ties with Taiwan under the Carter administration in 1979, and it came on the heels of last month's visit by Health Secretary Alex Azar, who was the highest-level U.S. Cabinet official to visit the country in decades.

On Sept. 19, the day of Krach's departure and a day after he attended the dinner hosted by Tsai, China's state-run mouthpiece the Global Times posted a hostile warning on Twitter. In the post, it admonished Tsai for "playing with fire" by pledging deeper ties with the U.S.

The editors of Beijing's voicebox then threatened that "If any act of her provacation [sic] violates the Anti-Secession Law of China, a war will be set off and Tsai will be wiped out." When Beijing promulgated the Anti-Secession Law in March of 2005, Taiwan's Mainland Affairs Council (MAC) expressed its opposition and condemned it as a unilateral step toward changing the status quo, an escalation of tensions across the Taiwan Strait, and a violation of international law.

The MAC pointed out that the law is flawed, as it is predicated on the false claim that “Taiwan is a part of China," while in reality Taiwan is already a sovereign nation with nothing to "secede" from. In the tweet, the Global Times appears to be referring to Article 8 of the law, which calls for "non-peaceful means" to annex Taiwan.

The law's three conditions for justifying "non-peaceful means" include the separation from China by “Taiwan independence secessionist forces,” the occurrence of “incidents entailing Taiwan’s secession from China,” and the complete exhaustion of all possibilities for peaceful unification.

The menacing tweet was met with 1,400 largely hostile responses, including a large number of Indian netizens who have been angered by the Galwan Valley Skirmish among other clashes this year along the India-China border. On the Taiwan section of Reddit, the post also received 66 comments criticizing the media outlet for regurgitating propaganda for Beijing, with many calling for Twitter to ban the Global Times from its platform.

Voice:Taiwan leader Tsai Ing-wen, who pledged deeper ties with the US at a dinner for a visiting senior State Department official,is clearly playing with fire. If any act of her provacation violates the Anti-Secession Law of China, a war will be set off and Tsai will be wiped out pic.twitter.com/hPZl42dVb1