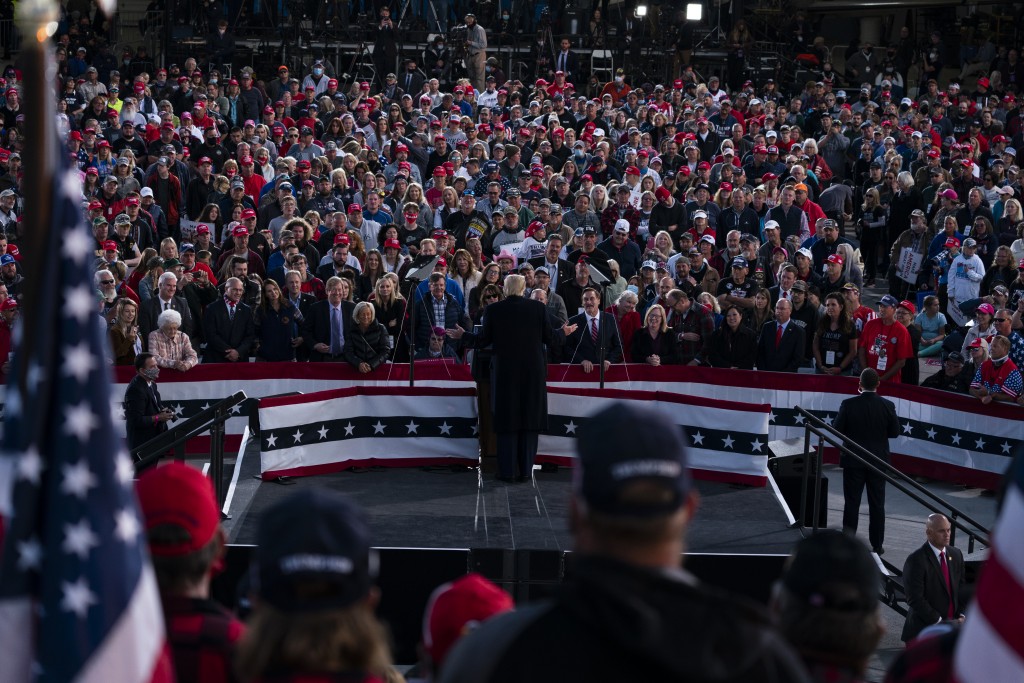 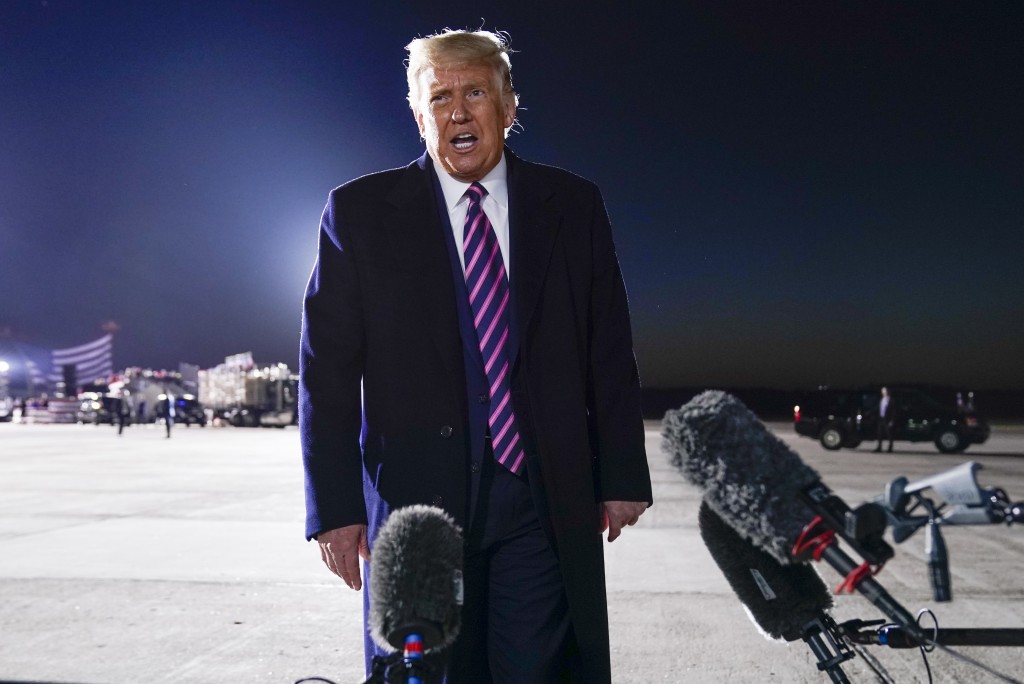 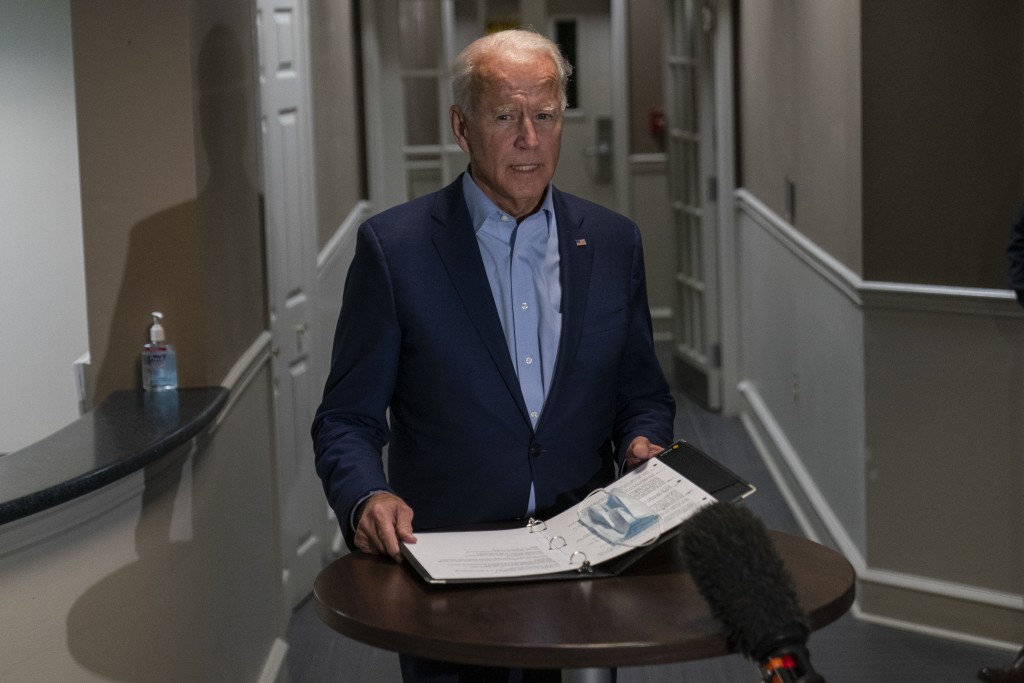 BEMIDJI, Minnesota (AP) — Minutes into yet another Donald Trump campaign rally, the world got word that Justice Ruth Bader Ginsburg had died. But no one told the president.

No one passed him a note. No one whispered in his ear. And so Trump continued with his wide-ranging rally speech, seemingly oblivious to the seismic news that was shaking Washington and gradually filtering through the crowd in front of him as cellphones spread the word.

Over the next 90 minutes, Trump claimed that Minnesota would be flooded with refugees if Democrat Joe Biden won the White House. He lashed out at liberal freshmen Democratic Reps. Alexandria Ocasio-Cortez and Ilhan Omar. He talked Big Ten football.

And toward the end of his address, he told the crowd that whoever wins the Nov. 3 election would be certain to have the chance to pick one or more justices to serve on the high court.

Biden, for his part, was also campaigning in Minnesota on Friday. But he was already flying home on his campaign plane when word came of Ginsburg's passing. His press pool was on a separate plane when the news arrived via spotty internet connections.

The lone Biden campaign staffer aboard, traveling press secretary Meghan Hayes, was besieged with requests for comment. “I have no information for you,” she said. “The Wi-Fi sucks.”

Back in Minnesota, Trump finally wound down his rally after close to two hours.

After getting off the stage, Trump walked with aides toward Air Force One and stopped briefly to speak with reporters before boarding the aircraft.

“She just died?” Trump said, when asked by reporters for reaction to Ginsburg’s death. “I didn’t know that — you’re telling me now for the first time.”

Trump boarded the plane and headed back to Washington without answering questions about whether he would seek confirmation of a replacement before Election Day or the end of his term.

The rally scene wasn’t quite the same dynamic as when President George W. Bush continued to read a children’s book to students in a Florida elementary school with cameras rolling after an aide whispered into his ear that America was under attack on Sept. 11, 2001.

But it was an incongruous sight as Trump proceeded with his speech unawares, while the news spread through his audience of a death that would surely open a new battlefront in the 2020 campaign.

The news seemed to filter out slowly, at least at first, as most people in the audience were focused on Trump and cell reception was spotty.

At one point, one Trump supporter alerted those around him that he had just received a news alert on his phone that Ginsburg had died. “Really?” responded a man wearing a camouflage Trump hat. Those nearby briefly turned their gaze away from the president’s speech and to the man with the iPhone.

A few minutes later, Trump would turn his own attention to the high court, something he frequently does during his speeches, to talk about remaking the judiciary with his appointment of more than 200 federal judges and Supreme Court Justices Neil Gorsuch and Brett Kavanaugh. As Trump told the audience that the winner of the November election might have the chance to appoint multiple justices, one man shouted at the president, “One more, one more!”

Trump reminded the audience that earlier this month he had released an updated list of conservatives who would be under consideration for a lifetime appointment to the Supreme Court should he be given the opportunity.

He noted that among those on his list was Sen. Ted Cruz, the Texas Republican he vanquished in the battle for the GOP presidential nomination in 2016.

Trump joked that Cruz would get the backing of every Republican and Democrat, because they'd be happy to be rid of Texas’ junior senator, implying that his personality has rubbed some of his colleagues the wrong way.

As Trump moved on to other topics, White House aides were reacting to Ginsberg’s death.

White House adviser Ben Williamson took to Twitter to say the White House flag had been lowered to half-staff to honor Ginsburg. And White House chief of staff Mark Meadows tweeted his condolences to the late justice’s family and loved ones.

Trump didn’t speak with the White House reporters traveling on Air Force One during his return trip to Washington, as he frequently does during his travels. But shortly before landing, he issued a statement praising Ginsburg for her “brilliant mind and her powerful dissents” and her ability to “disagree without being disagreeable.”

“May her memory be a great and magnificent blessing to the world,” Trump said, speaking with unusual respect for a political foe.

Biden's plane landed at New Castle Airport in Delaware moments after his press plane had arrived. Aides scurried to set up a place for Biden to make a statement away from the noise of the aircraft's engines.

“You all learned, as I did on this flight, very sad news,” he said.

He concluded, “Thank you all and I’m sorry such a ... .” He paused but didn’t finish the sentence, simply adding, “You had to learn it on a plane ride.”