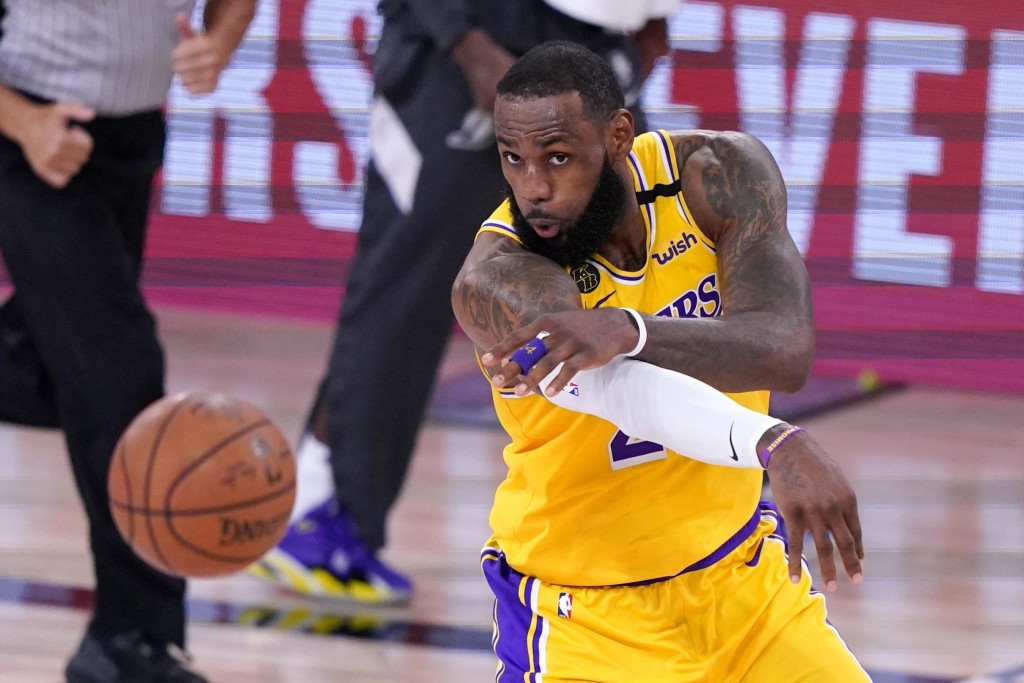 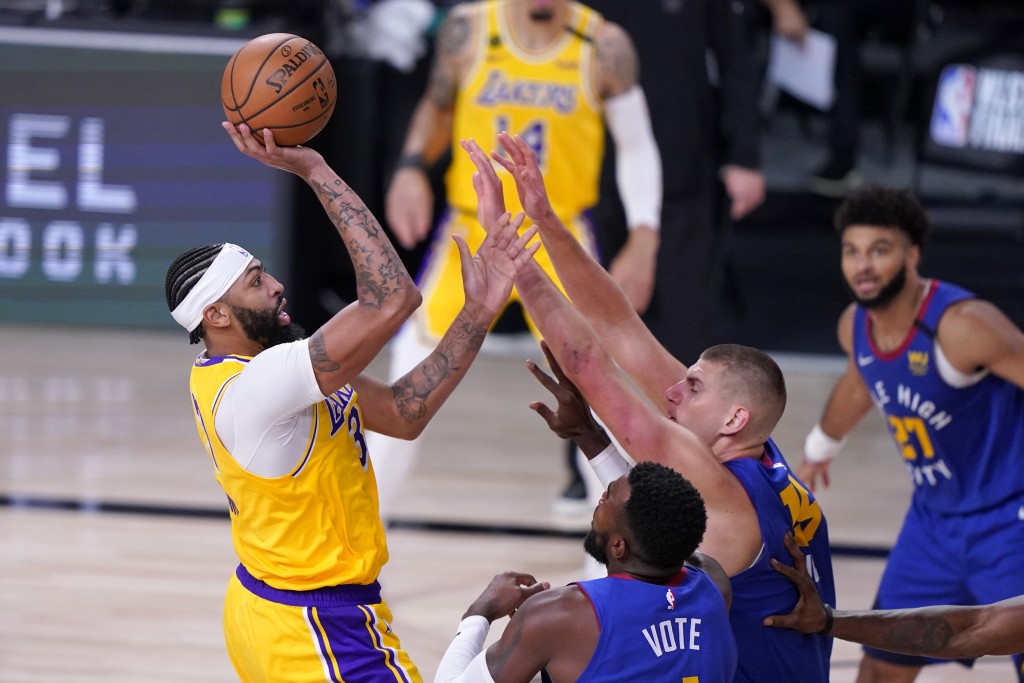 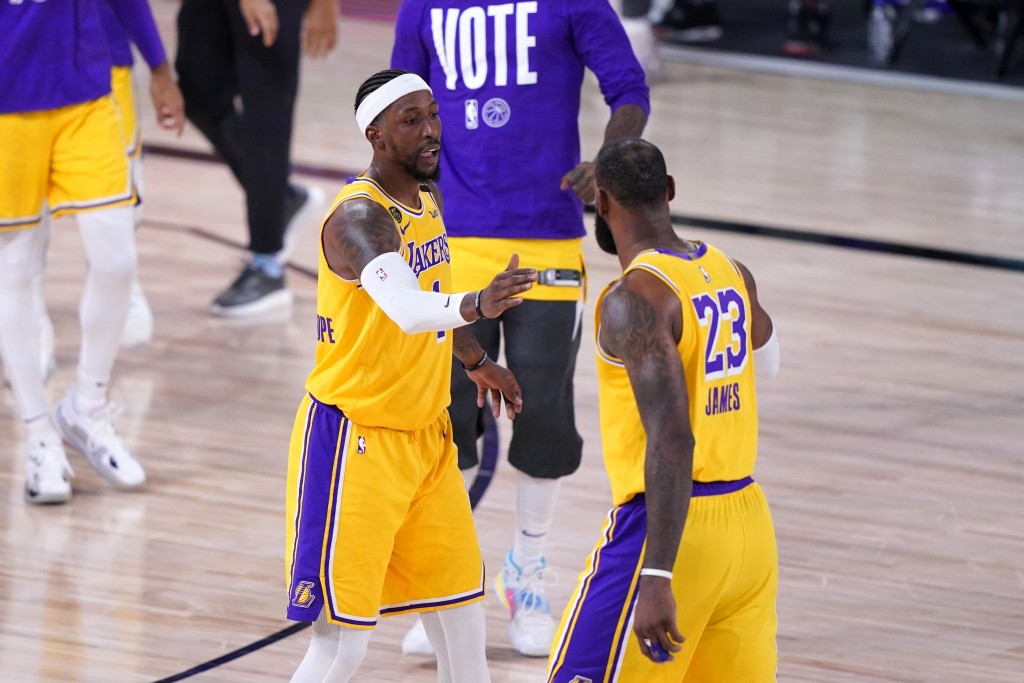 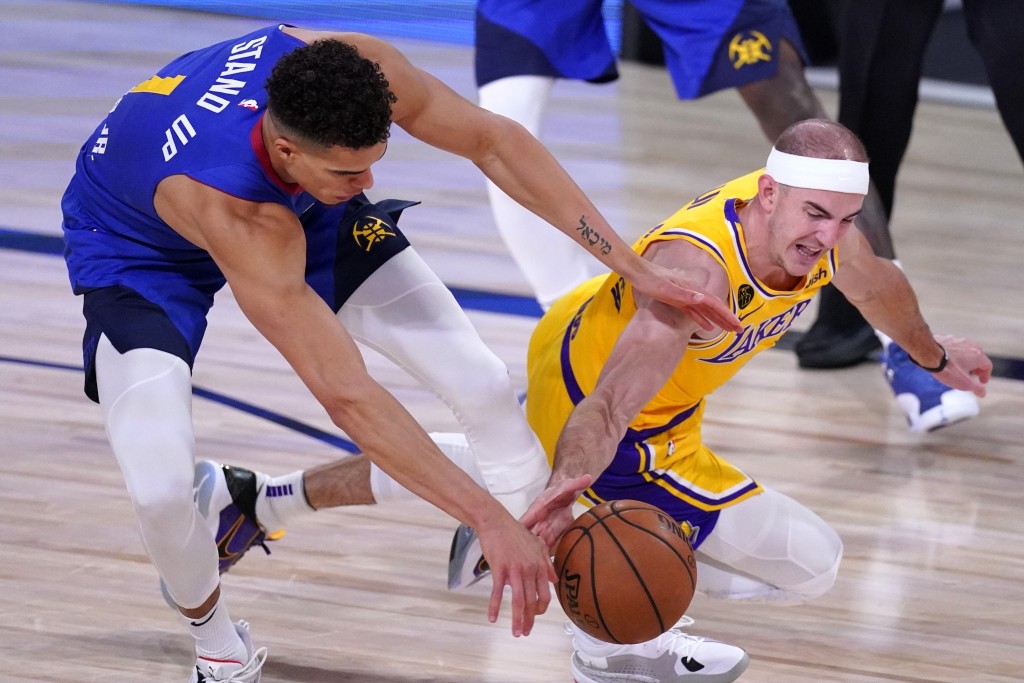 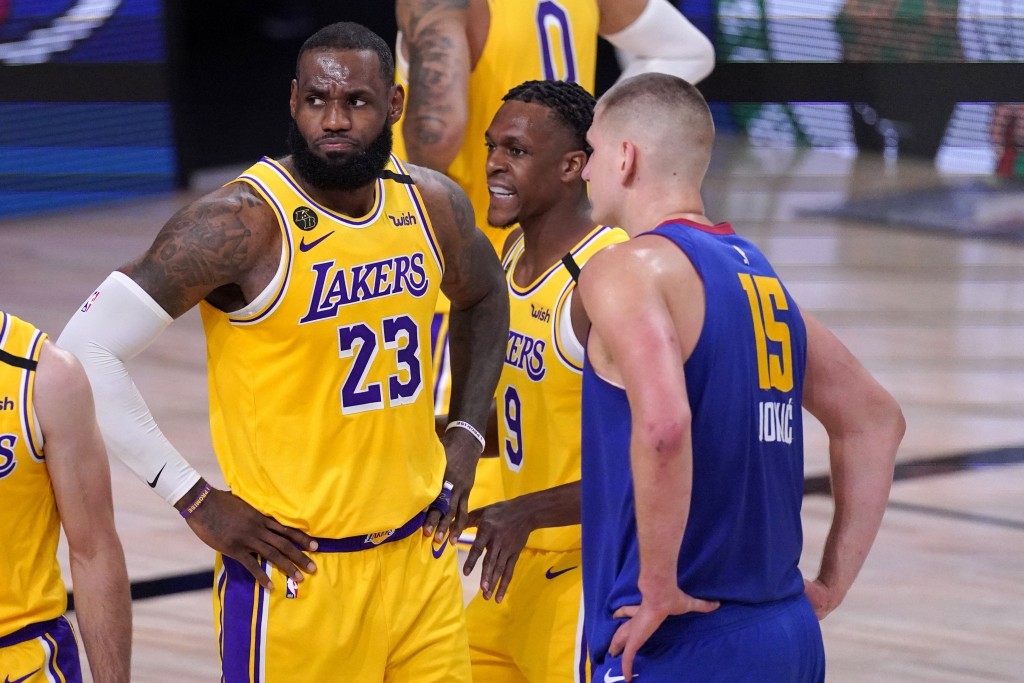 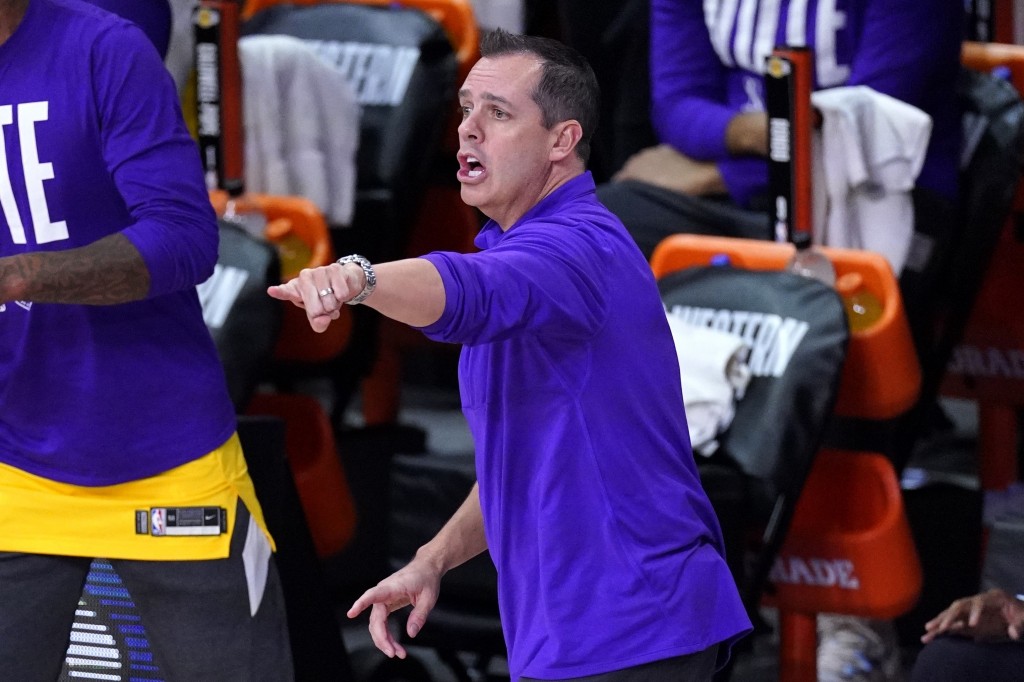 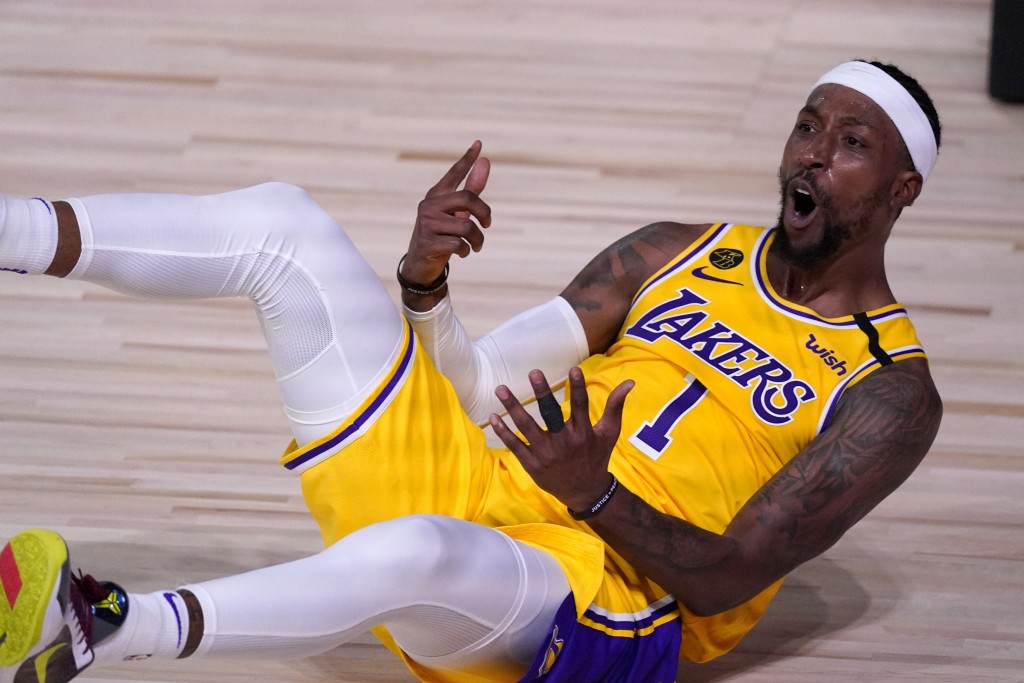 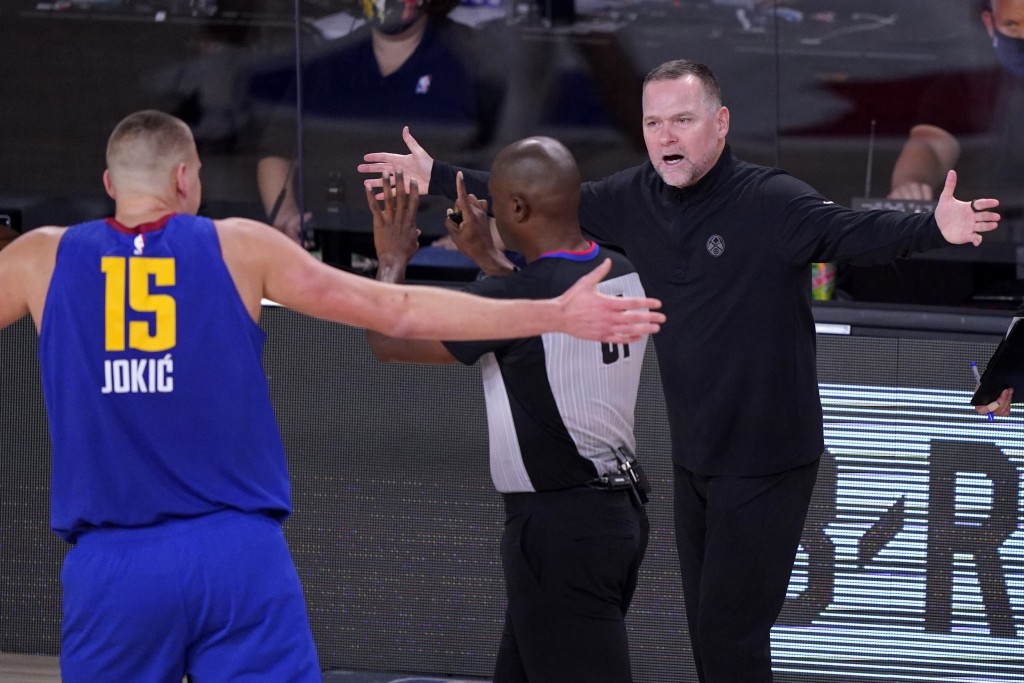 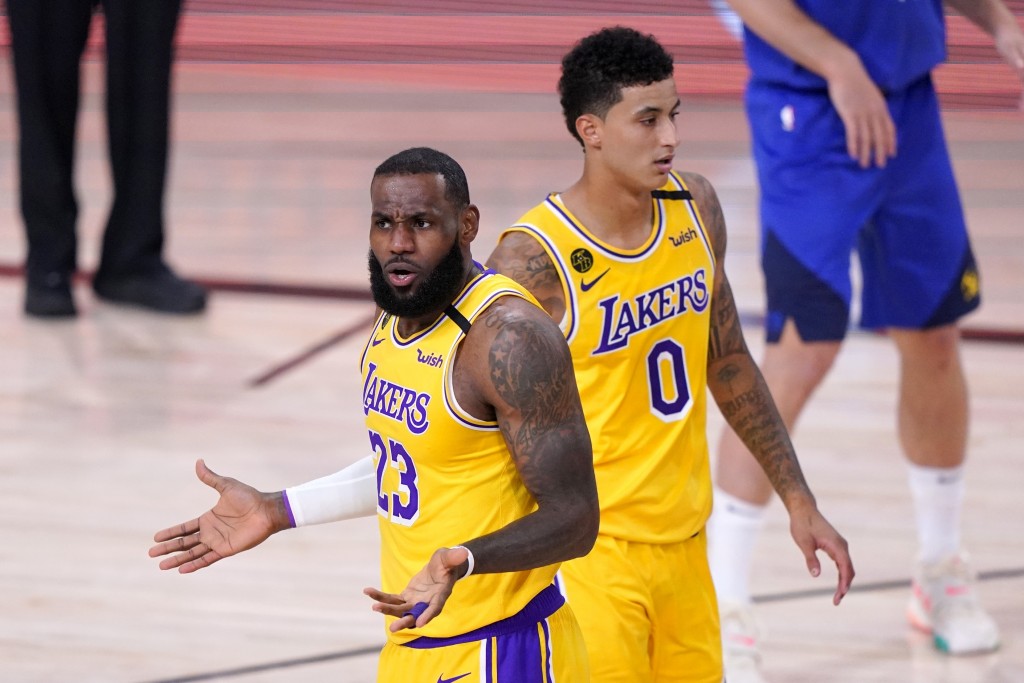 LAKE BUENA VISTA, Fla. (AP) — Anthony Davis had 37 points and 10 rebounds, LeBron James added 15 points and 12 assists, and the Los Angeles Lakers rolled to a 126-114 victory over the Denver Nuggets on Friday night in Game 1 of the Western Conference finals.

Slow starters in the previous two rounds, the top-seeded Lakers put this one away in a hurry, opening a double-digit lead in the first half that they easily extended in the third quarter.

Kentavious Caldwell-Pope scored 18 points and Dwight Howard rejoined the rotation with 13 in a powerful return to the conference finals for the Lakers, who hadn't been to the NBA's final four since winning their last championship in 2010.

Los Angeles dropped Game 1 against both Portland and Houston before winning the next four games. The Lakers quickly knocked off any rust for another long layoff in the bubble against a Denver team that's had things much tougher.

Nikola Jokic and Jamal Murray each scored 21 points for the Nuggets, playing in the conference finals for the first time since the Lakers beat them in 2009.

Denver overcame 3-1 deficits against Utah and the Clippers, becoming the first team to do that twice in a postseason. The Nuggets immediately fell behind again, digging themselves a big hole when Jokic and Murray each picked up three fouls in the first half that just got deeper in the second half.

Davis scored 14 points in the first quarter, but the Nuggets shot nearly 64 percent, with Murray's 3-pointer as time expired giving them a 38-36 lead.

Alex Caruso converted a three-point play to open the second and start a 17-1 run by the Lakers to start the period and make it 53-39 before the Nuggets made their first field goal after more than five minutes.

The lead stayed right around there for the remainder of the half, as the Lakers paraded to the foul line while Jokic, Murray and Paul Millsap went the bench with three fouls. Los Angeles shot a whopping 24 free throws in the period — more baskets than either team made in the half — and led 70-59 at the break.

Nuggets: The Nuggets fell to 7-22 against the Lakers in the postseason. ... Denver's 16 fouls in the second quarter tied the most by any team in a quarter this season. It was the first time this season that Murray and Jokic both had three fouls before halftime.

Lakers: Rajon Rondo had nine assists to give him 1,025 in the playoffs, passing Michael Jordan (1,022) for 10th on the NBA’s career list. ... Howard sat out three games and played only 4 1/2 minutes in the last four minutes against the small-ball Rockets.

Lakers coach Frank Vogel was a little surprised that Giannis Antetokounmpo was so far ahead of James in voting for the MVP award, receiving 85 first-place votes to James' 16.

“No disrespect for Giannis, Giannis had a great season. He's a great player, but what LeBron does for our team to me is unparalleled,” Vogel said. “To carry the threat of going for 40 at any point but leading the league in assists and quarterbacking our defense and driving our team to as many wins as we’ve had and our playoff success, to me he’s our MVP.

"But I understand how the voting goes and quite frankly our whole group and I’m sure LeBron would echo this is focused on something bigger than any individual accolades.”

Nuggets coach Michael Malone said he had been in touch with Denver Mayor Michael Hancock, who told him about the passion back home.

“He's told me that it’s just so great to see the city all come together and unite behind a feel-good story in the Nuggets and we still have a lot of work to do," Malone said. “So we appreciate all the love and support back home, no doubt.”