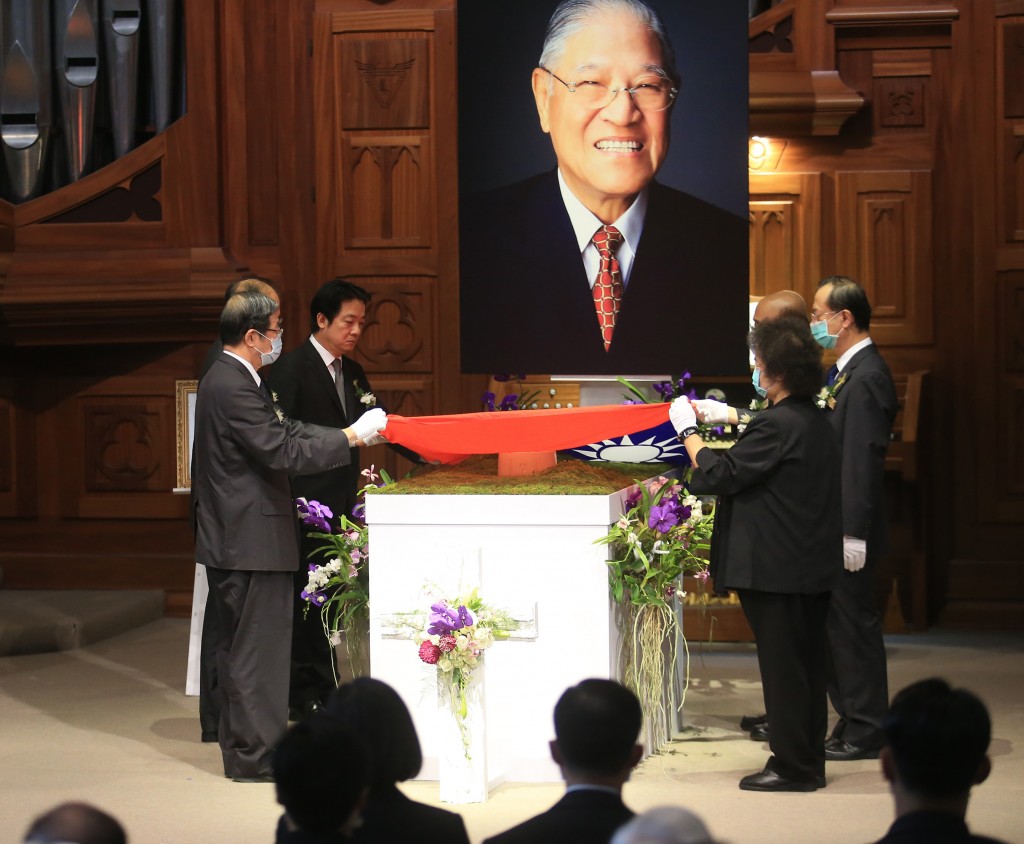 In the auditorium of a Christian university full of solemnity, approximately 800 top government officials, foreign envoys, party leaders, and other prominent figures paid their tribute to the late president. Among them were the U.S. delegation led by Undersecretary of State for Economic Growth, Energy and the Environment Keith Krach, as well as a Japanese delegation led by former Prime Minister Yoshiro Mori.

The ceremony began shortly after Lee’s family members, carrying Lee’s image and urn, arrived at the auditorium. President Tsai Ing-wen (蔡英文) conferred a posthumous presidential citation on Lee, who died on July 30 at the age of 97, in recognition of the late president’s contributions to the country. “As we pay our last respects and honor his lifelong contributions and devotion to our nation, we must not forget that Taiwan’s future is now in our hands,” remarked Tsai after making three bows in front of Lee’s image. “His spirit will guide the nation and the people of Taiwan as we continue along the path of democracy, freedom, diversity and openness,” she said, reading out the late president’s achievements as a public servant for nearly five decades.

The people of Taiwan are responsible for “further defining Taiwan’s identity and deepening and bolstering democracy and freedom,” in order to continue the lifelong endeavors of Lee, said Tsai, referring to Lee’s significant role in transforming Taiwan into a democratic society. She urged Taiwanese to meet future challenges in an ever-changing environment with confidence and decide the future of the country.

On behalf of former Japan Prime Minister Shinzo Abe, the Japanese representative to Taiwan, Hiroyasu Izumi, said: “I express my profound gratitude and respect toward former President Lee Teng-hui for forging the friendship between Japan and Taiwan, and for contributing to Taiwan’s democracy and development.”

Abe handed over power to his right-hand man Yoshihide Suga earlier this week. Having expressed his condolences publicly during a press event shortly after Lee's passing, Abe said he hopes Japan and Taiwan will continue to be guarded gently by the late Taiwan president. Via a pre-recorded video, the Dalai Lama described his first meeting with Lee, then the president, in 1997, on his first trip to Taiwan. “I admire his commitment about democracy and freedom, and preservation of Chinese culture in Taiwan,” said the 85-year old Buddhist leader.

“As his close friend, I always remember him,” said the Dalai Lama, adding that he would pray for his reincarnation, which he believes will continue to carry Lee's spirit.

The first democratically elected president of Taiwan, Lee has been nicknamed “Mr. Democracy" by foreign media for pushing for universal suffrage and the decriminalization of political dissenters starting in the 1990s, among other political reforms. Before democratization, Taiwan had experienced nearly four decades of authoritarian rule by the Kuomintang Party (KMT).

After the hours-long ceremony was concluded, the motorcade set out from the auditorium slowly, with a long marching band leading the way for a while. A 21-gun salute was fired as the motorcade left for Lee’s residence.