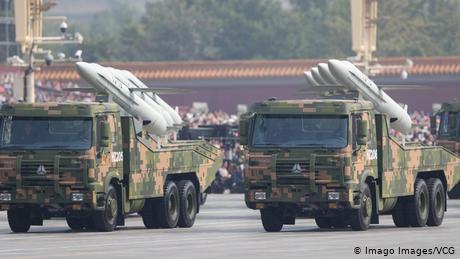 Taiwan's Foreign Minister Joseph Wu is ringing the alarm, hoping that the world will pay attention to the profound threat emanating from China.

"The threat is very real and therefore Taiwan's preparation is also very serious," he told DW. "We are trying to deal with the military threat, day in and day out."

China's aggressive military probing has been going on for years — an unending stress test for the democratic island it claims as its territory.

But in 2020, the threat has taken on a new intensity. Over and over again, Taiwan has had to scramble fighters to intercept Chinese warplanes flying towards or even into Taiwan's airspace.

With China cracking down on freedoms in Hong Kong, accused of sweeping repression against the Uighurs in Xinjiang, expanding in the South China Sea, and clashing with India in the Himalayas, Taiwan is asking: Are we next?

In a new in-depth film DW lays bare the risks to this highly vulnerable and yet thriving society, and examines three possible scenarios with strategy and military experts from Taiwan, China, the US and Germany.

China is completely open about the threat. President Xi Jinping framed it himself in a high-profile speech in 2019: "We do not promise to renounce the use of force and reserve the option to use all necessary measures."

Yet this threat to Taiwan receives little international attention.

"To say that the world has underestimated the severity of this flashpoint and that there's the potential for war over Taiwan — I think itself is an underestimation," said Ian Easton of the Project 2049 Institute in Washington, DC, and author of "The China Invasion Threat."

James Fanell, former intelligence chief for the US Pacific Fleet, agrees: "2020 to 2030 is the most dangerous time on earth, in my opinion, for a conflict with China over these disputed territories."

Despite flourishing into a vibrant, high-tech democratic society since its split from mainland China at the end of the civil war in 1949, Taiwan is highly exposed.

Just 15 countries around the world recognize it as an independent state. It is frozen out of international bodies like the UN and the World Health Organization. And with a population of under 24 million, it is dwarfed by China.

Crucially, the military gap between China and Taiwan widens every year.

Washington supplies Taipei's armed forces in line with defense commitments made after it switched diplomatic recognition to Beijing in 1979. But those commitments are highly ambiguous. They stipulate that Washington maintain "the military capability in the West Pacific to prevent intimidation and coercion against Taiwan," said Bonnie Glaser of the Center for International and Strategic Studies in Washington, DC.

"Notably, that is not a commitment to come to Taiwan's defense in the event that it is attacked," Glaser said.

China's threat to Taiwan is backed by vast military power. It has spent decades amassing the resources to follow through — pouring massive investment into its naval forces, even overtaking the US.

"For the last five years plus, they've been producing literally five times as many ships per year as the US Navy produces," said former Intelligence Chief James Fanell. "My projection is that the Chinese Navy by 2030 will have over 550 ships and submarines, and the United States Navy is still struggling to figure out how to get to 350-355."

Key here is not only the size of the fleet but the type of ships Beijing is building and the forces that work with them. China's new generation of amphibious warfare vessels, coupled to an expanded marine corps, would play a critical role in a possible invasion of Taiwan.

China's array of anti-ship missiles is another part of the arsenal. "They've developed this cornucopia of missile systems designed specifically to defeat our Navy," said Fanell.

China is the world leader in this technology. "They have anti-ship cruise missiles like the YJ-18, which has a range that's longer than anything that the United States has right now," said Fanell. "And they have anti-ship ballistic missiles that were specifically designed to go after US Navy aircraft carriers."

These weapons are precisely what China would need to deter — or repel — a US intervention to defend Taiwan.

"Even five years ago, the ability of the United States to come to Taiwan's defense was greater than it is today," said Bonnie Glaser. "It has eroded over the last decade. And that is, I think, problematic."

So what could actually happen?

In the new film DW examines three possible scenarios in detail: gradually chipping away at Taiwan's stability via military and hybrid means; a sudden, Crimea-style annexation of outlying islands; and finally a full-scale invasion.

An invasion would involve enormous risks not just to Taiwan, but to the whole world. The US would face the dilemma of whether to intervene — potentially sparking a war between two superpowers.

"Everything that happens in this scenario happens under the shadow of a potential nuclear war," Easton told DW. "Every decision that was made every minute, every day of a crisis or once a crisis escalates to war; you would never know when things could spin out of control."

The world is not ready

Ian Easton says that this last, most dangerous scenario could arise from internal turbulence in China.

"You could imagine all kinds of disasters that that could occur that would put pressure on the central leadership to get people to rally around the flag. And of course, at that point, Taiwan is an obvious one, especially if it's not clear that the United States is committed to Taiwan's defense."

A period of political instability in the US — such as a contested presidential election result as feared this year — could open a window of opportunity. And Taiwan's foreign minister, Joseph Wu, warned that conditions could converge in China sooner than many expect.

"If you look at the internal situation in China at this moment, the economy has been affected by COVID-19 and also the very serious floods," he said. "Under these kinds of circumstances, the Chinese authoritarian leaders may find Taiwan as a convenient scapegoat. Therefore Taiwan needs to be doubly concerned about a possible Chinese use of force against us."

There are growing calls in the US for a clearer commitment to Taiwan's defense.

In Congress, House Foreign Affairs Committee member Ted Yoho, a Republican from Florida, has drafted a bill that would anchor this in law.

"If there were an attack on Taiwan by China, it would authorize an Authorization for the Use of Military Force to allow the president to go in and defend Taiwan militarily," he told DW. "It gets rid of the strategic, political and diplomatic ambiguity that's lasted since the 1970s."

Critics argue that this would open up new dangers. Bonnie Glaser of the CSIS said it could "give a blank check to a Taiwan president to engage in more dangerous and destabilizing behaviors."

Glaser argues that the US should prioritize restoring its capability to defend Taiwan. "I think the United States has been a bit complacent in recent years. My hope is that it will follow through on some of the plans that it currently has to modernize and update US forces with an eye to being able to intervene on Taiwan's behalf."

Europe, too, has a responsibility, says Janka Oertel of the European Council on Foreign Relations. "We have not devoted enough energy to these kinds of scenarios. What we lack is a European conversation about what kind of player Europe in the future would like to be in these kinds of scenarios, because this is not the last time that we will see or that we could potentially see a scenario like that unfolding."

In Taiwan itself, Foreign Minister Joseph Wu made an urgent appeal to democracies around the world at least to limit Taipei's diplomatic isolation.

For Wu, it is in the democratic world's own interests to support Taiwan against China's aggression — before it is too late.

"They are trying to export the authoritarian international order while democracies are following the rule-based international order," he said. "If China succeeds in taking Taiwan over — I think the rest of the world, especially for democracies, is going to feel the heat. China is expanding outward. Taiwan happens to be on the front line."