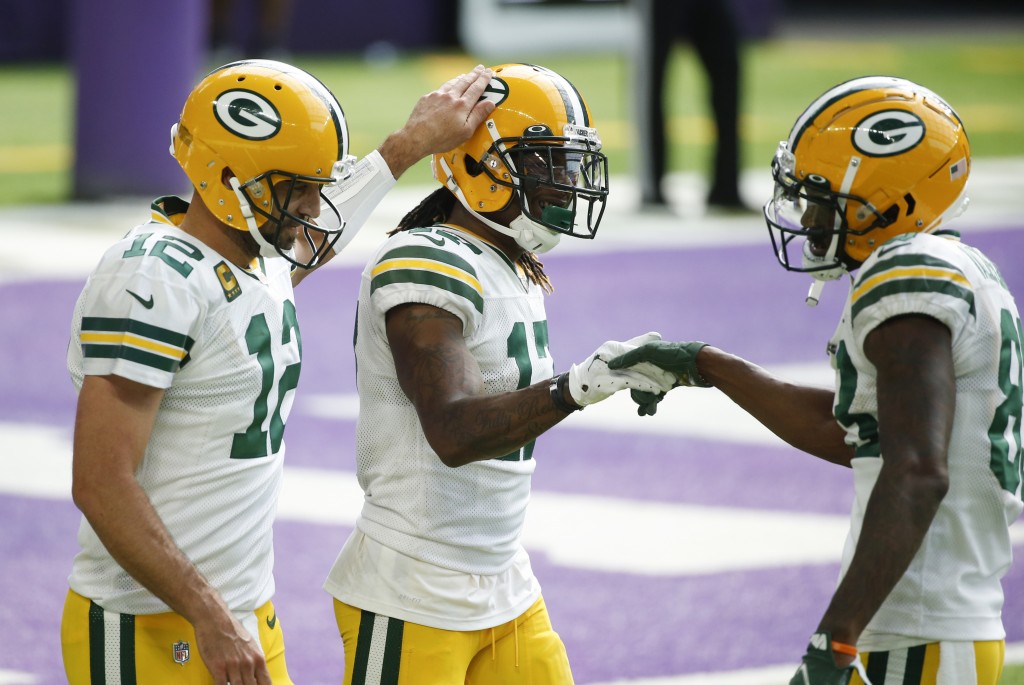 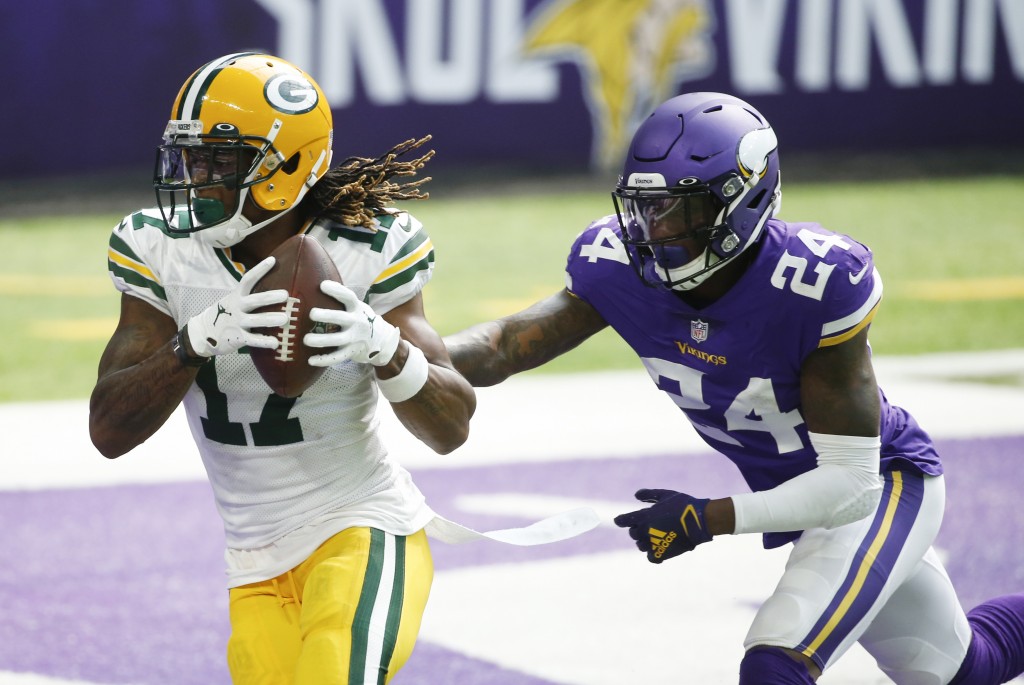 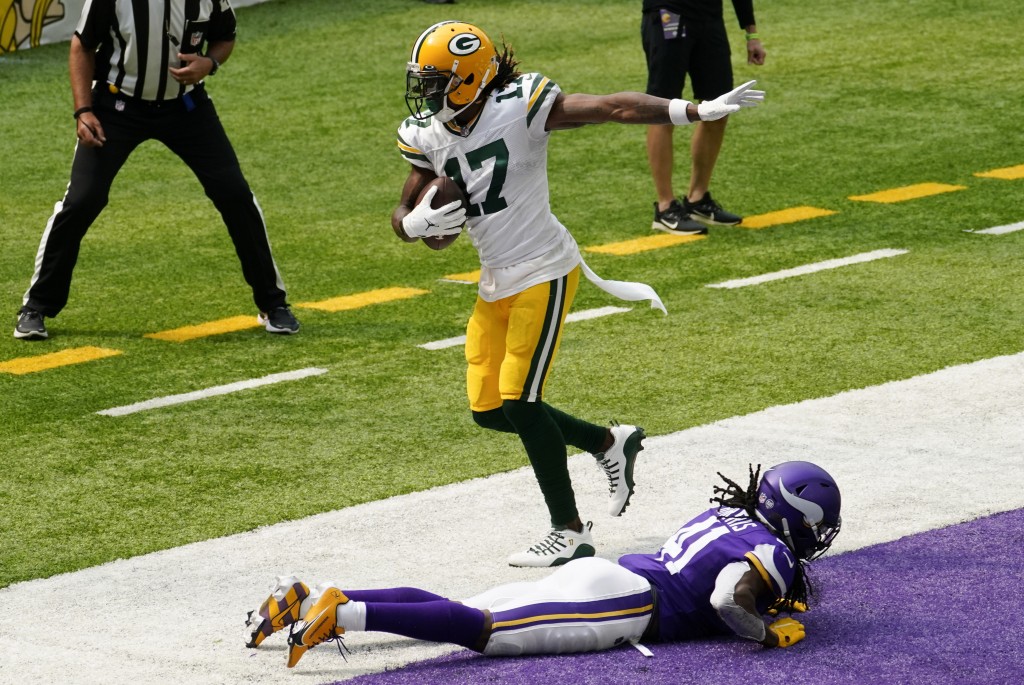 “It’s this generation now,” the 36-year-old Rodgers quipped. “They’d rather send a text across the locker room than walk across.”

They may prefer different methods of communication, but Rodgers and Adams have developed quite the relationship on the field.

Adams caught 14 passes from Rodgers in a season-opening 43-34 victory over the Minnesota Vikings to tie Don Hutson’s 78-year franchise record for receptions in a game. Adams also scored twice and now has an NFL-leading 42 touchdown catches since 2016.

That’s a remarkable rise for guy who totaled just four touchdown catches in his first two seasons. Yet Rodgers says he could tell even then Adams had the confidence to develop into a special player.

“I think some guys step on the field and believe they’re the best player on the field, and a lot of it is bravado and false confidence, their own kind of rebuttal to the insecurity they feel maybe about their own abilities or abilities to perform at this level,” Rodgers said. “There’s been a few guys over the years who have had real confidence. Davante Adams has since he got here.”

Rodgers said he can distinguish which people have real confidence rather than false bravado by how they respond to adversity. Adams offers a similar perspective.

“Some people, when they go through tough times, they start to question themselves and their abilities and what they bring to the table and what they can do and how everybody else views them,” Adams said. “But when you have full, real confidence in yourself, you just look at certain setbacks or certain things that happen as just something that happened rather than it’s a part of who you are and it’s going factor into your next move or whatever.”

Even with all that confidence, Adams acknowledges he needed time to feel comfortable initiating the conversations with Rodgers that former teammates Jordy Nelson and Randall Cobb had often conducted with the veteran quarterback.

Adams hoped to develop a similar type of kinship with the two-time MVP but didn’t want to come across the wrong way.

“It was something he always encouraged,” Adams said. “He wanted me to come and talk to him, share thoughts throughout the week, throughout the game, but I didn’t necessarily want him to think I’m calling for the ball or doing this. As we went along a little bit longer and got used to each other and got to know each other really well, he knew where it was coming from, he understood my football IQ and just started trusting me and trusting my eyes out on the field, and I think that spread throughout the coaches as well.”

Now they’re at a point where Adams isn’t shy about suggesting routes to Rodgers during a game.

“It’s extremely gratifying when it’s third-and-6 and I, say. come out of nowhere and tell him the route I think I want to run on third down, and we run it and it works,” Adams said. “That’s how that trust is built up, and that’s what’s gotten us to the point we’re at now.”

Rodgers and Adams could be facing a secondary dealing with uncertainty for the second straight week.

Green Bay torched a Vikings defense whose three main cornerbacks were all 23 or younger. Detroit has its own cornerback issues with hamstring problems putting Justin Coleman on injured reserve and preventing Desmond Trufant from practicing Wednesday.

Rookie first-round pick Jeff Okudah — another Lions cornerback — was a full participant in Wednesday’s practice and could make his NFL debut Sunday after missing a season-opening loss to Chicago with a hamstring injury.

Adams said he doesn’t focus much on an opponent’s injury situation as he gets ready for a game. He just concentrates on helping make sure the Packers are at their best each Sunday. That includes those frequent conversations with Rodgers, whether in person or by text.

“We’ll do stuff like that, where something will be in my head and maybe it’s not the time to talk in person but I’ve got something I want to share or whatever,” Adams said. “We do that all the time. He’s an open book and same with me, so that’s just kind of how we function.”