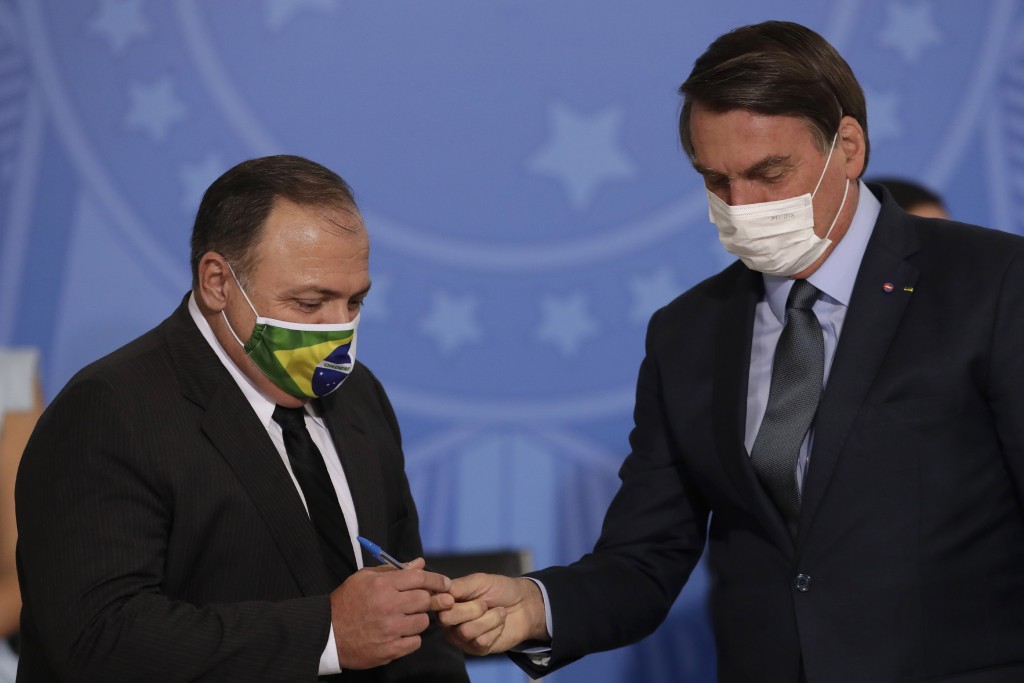 Pazuello, a logistics expert with no prior health experience before taking a deputy position in May, follows two predecessors who departed after disagreements with President Jair Bolsonaro regarding proper means to combat the new coronavirus.

“I am neither arriving nor leaving,” Pazuello joked at a ceremony at Brazil’s presidential palace in Brasilia. “This is an unprecedented situation.”

Bolsonaro, who has downplayed the risks of COVID-19 since the start of the pandemic, attended the ceremony and once again touted an anti-malarial drug as a cure for the disease while blaming mayors and governors for limiting activities; those two stances are what prompted the exits of his prior health ministers.

The South American country had confirmed just over 15,000 deaths from COVID-19 when Gen. Pazuello took over as interim minister, and in the three following months recorded an average 1,000 deaths per day. That trend has dipped downward in recent weeks. The total death toll has surpassed 134,000, the second highest in the world after the U.S.

“We managed to reach a well-defined situation of stability,” the newly-inducted minister said Wednesday. “We had to change the tires of the car as it went by.”

There are several reasons Brazil’s number of cases and deaths remained at a high plateau for so long. First, Brazil has a large population, with about 210 million people, and a vast territory roughly the size of the contiguous U.S. states. That means the virus first barreled through the southeast and northern regions and, after ebbing in those areas, began pummeling the center-west and south regions.

Also boosting Brazil’s caseload is the fact the nation never implemented a surveillance system or anything close to effective contact tracing that would help authorities get a handle on the spread, according to Pedro Hallal, an epidemiologist who coordinates the Federal University of Pelotas’ Epicovid19-BR testing program, by far the country’s most comprehensive.

While mayors and governors declined to impose Europe-style lockdowns, they did implement sweeping restrictions on activity that they have begun lifting since May. Those attempts to slow contagion raised hackles with Bolsonaro, who routinely sabotaged their measures. Rather, the president focused on the pandemic’s economic impact, warning the upshot of bringing the economy to a screeching halt would be worse for Brazilians than the virus itself, as many live hand-to-mouth.

Bolsonaro fired his first health minister for supporting local leaders’ broad quarantine measures. That minister’s successor – who held the post for less than a month – resigned in the face of the president’s promotion of the anti-malarial drugs as a solution to COVID-19. Upon assuming the interim position, Pazuello backed the drug's nationwide prescription and officially added its distribution by the ministry as part of Brazil’s anti-virus measures.

"I congratulate all of the doctors, especially those who were bold with hydroxychloroquine,” Bolsonaro said Wednesday, referring to the anti-malarial. There is no scientific evidence the drug helps COVID-19 patients, and an increasing body of research indicates it does not and, furthermore, can cause dangerous side effects.

Bolsonaro has often made a show of his outings from the presidential palace to mingle with supporters, sometimes without a mask. He suspended such behavior once he contracted the virus himself, but his rhetoric remained and he said he was taking hydroxychloroquine pills. The fact he ultimately overcame the virus jibed with his repeated claim – mimicked by his ardent supporters -- that the so-called health experts have unnecessarily stoked panic.

Since Pazuello became interim minister, he replaced dozens of the doctors and specialists in Brazil’s health ministry with soldiers, which on Wednesday he touted as “the restructuring of the ministry.”

He wore a mask but shook hands with many of those present in the crowd, including ministers, lawmakers and generals, with no apparent social distancing.

Pazuello’s new status is expected to create some tension within Brazil’s armed forces, because many of his colleagues believe having an active duty service as minister constitutes an unsavory mixing of armed forces with government. Pazuello didn’t say whether he will retire.

“As a military man, I understand that his remaining active duty implies risks to the image of the force,” Maynard Santa Rosa, a retired army general and a former minister of strategic affairs, told the Associated Press. Santa Rosa added that Pazuello has successfully made inroads with local authorities, which helped his efforts to prevent Brazil’s death toll from rising even further.

One of Pazuello's most criticized actions on the job came in June, when Brazil’s health ministry stopped publishing the number of total COVID-19 deaths and confirmed coronavirus cases in its website. He only reversed course after the country's top court ordered the government to resume full publication of data.